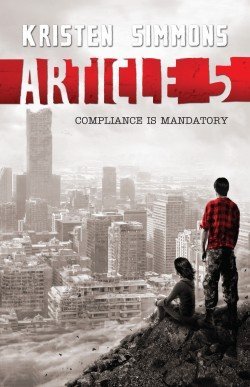 The Bill of Rights has been revoked, and replaced with the Moral Statutes.

Seventeen-year-old Ember Miller is old enough to remember that things weren’t always this way. Living with her rebellious single mother, it’s hard for her to forget that people weren’t always arrested for reading the wrong books or staying out after dark. It’s hard to forget that life in the United States used to be different.

Ember has perfected the art of keeping a low profile. She knows how to get the things she needs, like food stamps and hand-me-down clothes, and how to pass the random home inspections by the military. Her life is as close to peaceful as circumstances allow.

That is, until her mother is arrested for noncompliance with Article 5 of the Moral Statutes. And one of the arresting officers is none other than Chase Jennings—the only boy Ember has ever loved.

My Review
Set in the not-so-distant future, Article 5 kicks off with protagonist, Ember Miller, feeling frustrated by the post-war United States she lives in where the Bill of Rights has been replaced by the Moral Statutes. Article 5 of the Moral Statutes states that the only recognized family is a whole family with a mother, father, and children of that marriage. Ember’s family is non-compliant which sets up the story that turns into a roller coaster ride with a lot more twists and turns than I anticipated.

I was intrigued by the concept after reading The Family: The Secret Fundamentalism at the Heart of American Power, by Jeff Sharlet. It didn’t seem to be such a far-fetched idea. In fact it seems so disturbingly plausible that I felt myself getting sucked right into Ember’s world and never once questioned how something like that could happen, something I often find myself doing when reading dystopia.

Plot
The plot moves at a clipped pace and sometimes leaves you feeling breathless. It rarely slows down to let you catch your breath, either. I found this book extremely difficult to put down. There’s solid world building but one of the things I found lacking was a deeper understanding of what the government is really trying to achieve. While the world Simmons has drawn is realistic, scarily so, it’s not completely clear where this new government is going or what they want to accomplish. Especially when the Moral Militia, the soldiers tasked with upholding the Moral Statutes, are more than a dozen shades grayer than moral themselves.

Characters
The characters in Kristen Simmons young adult novel are well-drawn, believable, and deep. Ember is perhaps less likable than the conflicted soldier, Chase, who is hell bent on getting her to safety, despite Ember’s many attempts to sabotage him. But her inability to see what is so obvious to the reader is one of the things that keeps the story sizzling along.

Simmons background in psychology and social work helps make her characters come alive. She allows us deep inside Ember’s thoughts, and her understanding of the human psyche keeps Ember believable, even as we want to shake her and say, “Why can’t you see what’s really going on?”

Bottom Line
Article 5 is darker than most books I’ve read in the young adult dystopic genre. Ember’s world is darkly realistic and utterly devoid of any hope, but the realism and the emotion Simmons brings to the story holds it together and makes me want to hope for a better future for Ember and Chase.