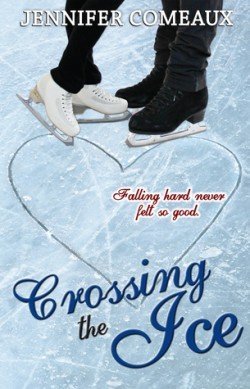 Pair skaters Courtney and Mark have one shot left at their Olympic dream. They vow not to let anything get in their way, especially not Josh and Stephanie, the wealthy and talented brother and sister team.

The heart doesn’t always listen to reason, though…

The more time Courtney spends with sweet, shy Josh, the harder she falls for him. But they are on opposite sides of the competition, and their futures are headed in opposite directions. Will their friendship blossom into more or are their paths too different to cross?

My Review
I had no expectations heading into this. I knew it was a romance set on the ice and that was good enough for me. I ended up really enjoying it. I listened to the audiobook and found reasons to take extra walks during the day so I could listen to more. The narrator, Emily Stokes, does a really good job. There were a few technical issues in Chapter 5 that should have been edited out, and other than the little kid voices she does that grated on my nerves, I thought the production was top notch.

Courtney and Mark are pairs skaters with their sights set on the Olympics. Josh and Stephanie are their competition. So when Courtney and Josh develop feelings for each other, things are going to get interesting.  And they do. Jennifer Comeaux creates sexual tension with the best romance writers. The chemistry between Josh and Court is palpable.

The story has two main plots — the skating competition and the romance — and both are done really well. The pacing is slow in a few spots, but for the most part, it’s a compelling tale of love and skating. About the only thing that didn’t work for me was the lack of sex. No, I don’t need steamy sex in a new adult novel. In fact, I’m okay if all the sex takes place off the page. But I had a hard time buying that it didn’t even happen there. Or anywhere. These are young, vibrant, attractive people with healthy sex drives and no real compelling reasons not to engage in a physical relationship. I could have bought into a religious, or any deeply held belief, that kept them chaste. However, that unbelievable aspect didn’t keep me from enjoying this otherwise angst-ridden tale.

Plot
Both plots are strong. The competition was intense and I felt like I was right there with them, battling for a place on the Olympic team. The romance was equally well done, with the push and pull of a forbidden love that is meant to be. There were several subplots, including Josh’s relationship with his parents and Courtney’s college plans, that were woven into the main plots seamlessly.

Characters
Courtney was fantastic. I love that she’s not perfect. She’s flawed in the best of ways that only makes her more human. And Josh is sweet and sensitive. It’s refreshing to read about a male lead who isn’t an alpha male yet still comes across as incredibly sexy. His vulnerability only adds to his attractiveness. I haven’t read any other books by Jennifer Comeaux, but I get the feeling that Em and Sergei were developed in an earlier novel, yet their characters are fully developed here.

Steph, Josh’s sister, is the only character I felt came across as stereotypical, but it fit the plot, so I’m not going to complain too much. And I do like that she didn’t change to become someone more likeable. Her role as the antagonist served a purpose and she does it well.

World Building
For someone who has never skated competitively, Jennifer Comeaux creates an incredibly believable world. Her descriptions are detailed and the world comes alive through the narration.

Top Five Things I Enjoyed About Crossing the Ice
1. Emily Stokes narration is really well done with only a few exceptions. I love the way she brought emotion and personality to the characters and the story through tone and inflection.

2. The skating details brought me into the heart of the story and made me feel as if I was on the ice with them.

3. Mrs.  Cassar (although I’m not sure if that’s spelled correctly) is a hoot, and I loved listening to the way the narrator brought her to life.

4. So many of the locations were familiar to me, Los Angeles, Staples Center, Provincetown, it was easy to visualize them.

5. The big competition didn’t turn out the way I thought it would. It was a twist I never saw coming and was deliciously refreshing.

Bottom Line
Crossing the Ice is a sweet new adult romance set in the world of competitive pairs figure skating. The audiobook is high quality and the narration is superb.

Disclaimer
I was provided with a copy of this audiobook by the author in exchange for an honest review.

About the Author
Jennifer Comeaux is a tax accountant by day, writer by night.

There aren’t any ice rinks near her home in south Louisiana, but she’s a diehard figure skating fan and loves to write stories of romance set in the world of competitive skating. One of her favorite pastimes is travelling to competitions, where she can experience all the glitz and drama that inspire her writing.

Jenniferloves to hear from readers! Visit jennifercomeaux.blogspot.com for contact information and to learn more about her books.