Welcome to the book blitz for FINDING OUR MORNING, a stand-alone adult historical romance/mystery, by Mickie B. Ashling. See below for information on the book, by links, an exclusive excerpt, and details on her giveaway. 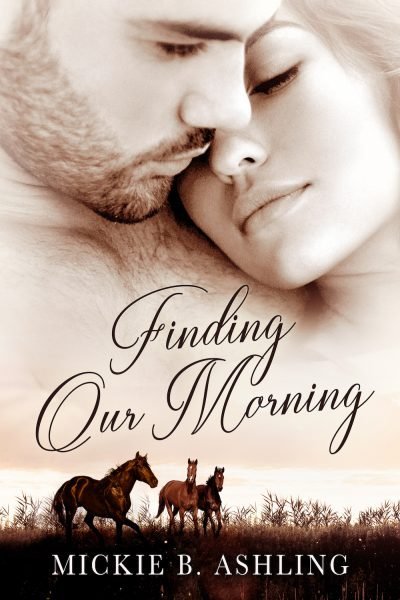 FINDING OUR MORNING by Mickie B. Ashling

Ginny Tate bides her time on the family stud farm in San Antonio, Texas, waiting to start veterinarian school in the fall. Bullied as an adolescent, she’s finally shed her old skin, but the emerging beauty still harbors insecurities and would rather hang out with horses than people.

Sponsored by his uncle, the Shah of Iran, Dariush—David—Akbari, a twenty-five-year-old NYU grad with a degree in International Law, is also a skilled polo player. He joins the royal traveling team for a tournament in Plano, Texas.

A decade in America has gradually altered David’s views on certain aspects of his culture. Torn between familial obligations and his adopted country, David resists the idea of returning to Iran so soon after graduation.

At the traditional after-party, David strikes up a conversation with Ginny, who is refreshingly honest. He receives an invitation to visit Tate Stud Farm and, on the pretext of buying another polo pony, persuades the shah to make a detour.

Great horsemanship coupled with self-effacing charm sets David apart from the entitled braggarts who normally populate the sport, and Ginny falls hard. His visit turns into a life-changing week that neither can foresee. Will they walk away unscathed or live to regret their impulsive behavior?

Inspired by events preceding the fall of the Pahlavi dynasty, Finding Our Morning is a love story that catapults us from Texas Hill Country to the epicenter of a monarchy on the brink of collapse. 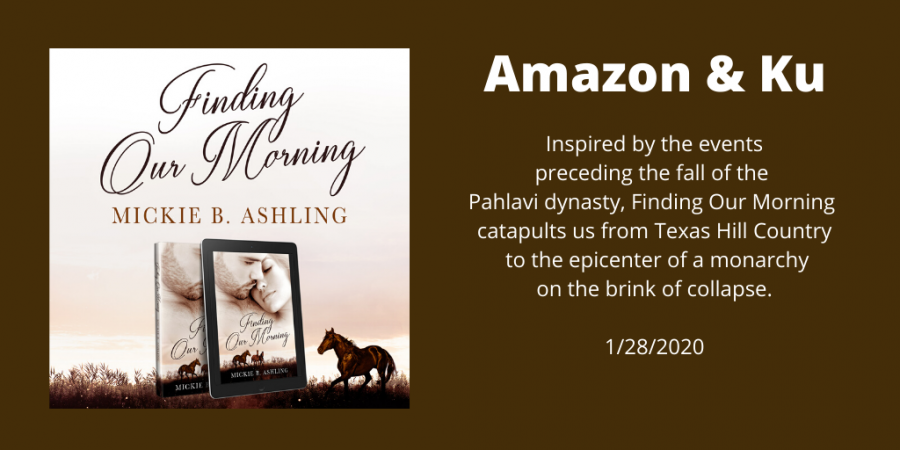 Excerpt #1
So much time had elapsed since Ginny issued the invitation, she didn’t know what to expect when David called two weeks later to arrange a meeting. Was he passing through town or was this an intentional stop? Either way, the days leading up to his arrival were pure torture.

On the morning in question, Ginny took longer than necessary to get ready. She left her hair loose instead of tying it back in her usual ponytail. Her luxurious locks were the only thing she could count on to draw eyes away from her face. The dark blond strands fell in a silky curtain to her midback and had been compared to a palomino’s coat on many occasions. As for the rest of her, it was business as usual. Faded jeans, a checked cotton shirt, and her favorite red cowboy boots. Her complexion was clear this morning, thank God, and she took her time applying eye makeup. It was out of the ordinary to get dolled up during the day, and her parents noticed as soon as she sat down to breakfast.

“Going to a party?” Margery asked.

“No, but you know the Shah of Iran is about to grace our doorstep, and I thought I’d look nice for a change.”

“You always look good,” Ray commented. “Anyone who thinks otherwise is a blind fool.”

“What about your chores?” Margery inquired. “Won’t your hair get in the way?”

“See that you do,” Margery replied. “I know you want to make a good impression, sweetie, but those foreigners aren’t coming to socialize. We have to present our best, and a clean, well-organized farm is just as important as our livestock. You wouldn’t eat in a dirty kitchen.”

“Then explain why you look more like a debutante than a rancher’s daughter this morning?”

“He offered dinner and dancing the last time we were together. I don’t want him to change his mind.”

“Which one is he again?”

“He was good,” Margery recalled.

“What are you going to wear tonight?”

“I’m not sure it’s happening, but I bought a new dress in case.”

“You’re too young to wear black,” Margery opined with a tsk.

Ginny rolled her eyes. “Give it a rest, Mom. I’m eighteen.”

“Black is more appropriate for someone older and more experienced.”

Ginny refused to take the bait. Her mother was being overprotective, given her dating history, and was understandably worried. Nonetheless, it was too early in the morning to argue. She scooped up the last of her egg yolk on a piece of toast, swallowed it down with orange juice, and stood up to go. “I’ll catch you guys later.”

Standing on the steps outside the kitchen door, she paused and scanned the horizon. The sun was already a bright ball of pulsing heat in the cloudless blue sky, and she could tell it was going to be another scorcher. Ginny hoped the Iranians had the good sense to come early to avoid the worst of it.

As she headed toward the stable where they kept the horses for sale, she scrutinized their property and tried to see it through the eyes of a stranger. Theirs was a small operation compared to other stud farms, but they had a stellar reputation. Margery Tate was the driving force behind their prosperity. The woman was a stickler for order and quick to remind new employees that pride in ownership was as important as a good pedigree.

Margery acquired her code of ethics from her parents who’d started the stud farm with one stallion and a few mares. As their only child, she’d inherited the bulk of the estate, with small portions divided among the loyal ranch hands who had been around until her father finally passed, a year and a day after her mother died of cancer. Her gender had never been a good enough excuse to avoid the hard work necessary to ensure the success of the farm, and Margery expected her only daughter to work as tirelessly as the rest of them.

She did have a point, Ginny conceded begrudgingly, but her advice was often framed in criticism, which usually rubbed people the wrong way. Horse breeding could be a messy business when things got out of hand, and organization was key.

She made the rounds swiftly this morning, inspecting each area with a critical eye, paying particular attention to the horses for sale. This would be their first stop and she wanted the area to be in tip-top shape. She could only imagine what the royal stables must look like with dozens of helpers at the shah’s beck and call. Well, they might not have his manpower, but over the years, the stud farm had gained a well-earned reputation for their excellent stock and integrity.

By the time the shah and his entourage arrived two hours later, her nerves were frayed. The group of six, dressed in casual attire, climbed out of a gleaming limousine. Ginny wasn’t sure what to expect, given their status, but these men looked like any prospective buyer, albeit better dressed. Her parents greeted the Iranians deferentially and offered to be their guides as they toured the premises. While they concentrated on the shah, Ginny walked up to David with an outstretched hand.

“Was there any doubt?” he asked, stepping forward and clasping her hand in his. He was so close she could smell his sweet breath, overlaid with a hint of coffee. His eyes weren’t black as she’d first thought. They were deep brown with a touch of caramel and were gazing at her appraisingly. Now that he was actually here, Ginny’s confidence faltered as she met his intense scrutiny. Had he come to buy a horse or check her out? Her heart rate sped up as nerves and anticipation made her breath falter. It was at once unexpected and exhilarating. Ginny withdrew her hand and stepped back, laughing off the moment awkwardly. 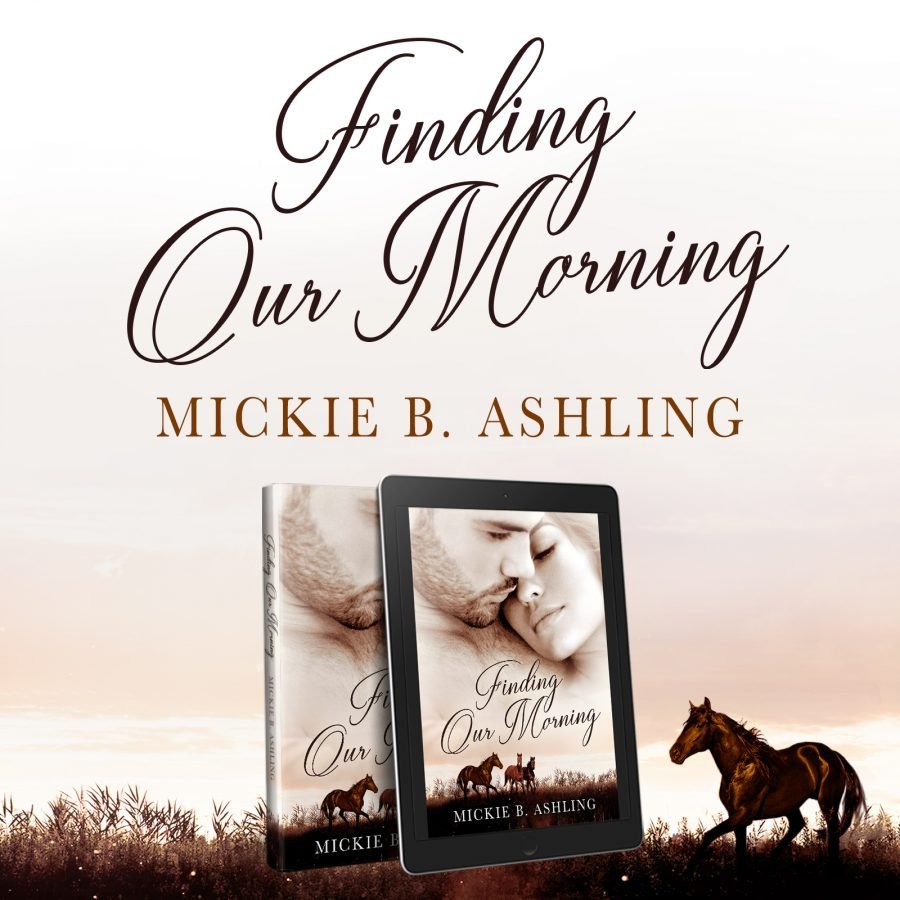 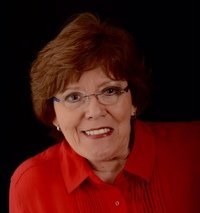 About the Author
Mickie B. Ashling is the pseudonym of a multi-published author who resides in a suburb outside Chicago. She is a product of her upbringing in various cultures, having lived in Japan, the Philippines, Spain, and the Middle East. Fluent in three languages, she’s a citizen of the world and an interesting mixture of East and West.

Since 2009, Mickie has written several dozen novels in the LGBTQ+ genre—which have been translated into French, Italian, Spanish, and German. Lately, her muse has been nudging her in a different direction, and she’s learned through past experience to pay attention to creative sparks that show up unexpectedly. Her pen name is a part of her now, and will travel along on this exciting new journey, wherever it might lead. She promises to be very specific in her book blurbs and cover art to avoid any confusion.