Welcome to the book blitz for SOMETHING WICKED, the first book in the young adult paranormal romance series, Something Wicked, by Nicole M. Rubino. See below for information on the book, buy links, an exclusive excerpt, and details on her giveaway. 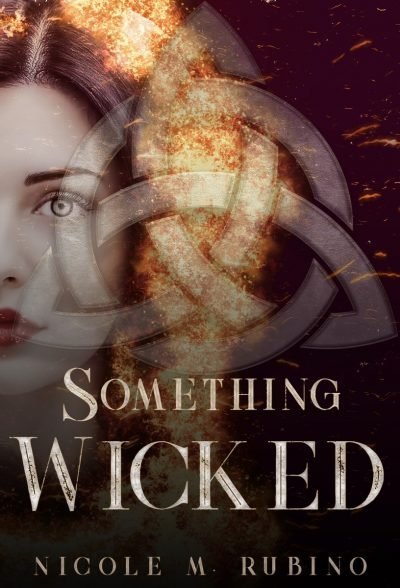 SOMETHING WICKED (Something Wicked #1) by Nicole M. Rubino

Synopsis
A break-up and a car accident are no way to begin your seventeenth birthday.

For Theo Montgomery, that is exactly how it began. Her bad luck turns worse when she returns home from a school dance to find her home engulfed in flames – with her parents still inside.

Theo is sent to live with her estranged aunt, Elizabeth, in Salem, Massachusetts. Salem proves to offer many new discoveries, one of those being that Theo, like her aunt, is a witch. A witch who must keep her magic in check, lest the Town’s witch hunters discover that magic has returned to the world after more than three hundred years. But how can she navigate a new school, new magical powers and avoid the witch hunters, when she finds herself enjoying the company of one?

Trystan de Lancre is a dangerous witch hunter and the only son of the Salem witch hunter clan leader, the notorious Joseph de Lancre. Despite his growing feelings for Theo, Trystan has his own reasons for getting close to her – and they are far from romantic. Yet, Trystan isn’t the only one keeping secrets. Theo knows her aunt is hiding something, something linked to the tragedy that happened in Salem long ago, and to Theo, herself.

Salem’s dark past rises to haunt Theo and the present-day witches, unraveling a shocking revelation: the true cause of the Salem Witch Trials.

Excerpt #2
Trystan saw her before she saw him.

It was a happy coincidence that he had been driving through Town when he saw her inside a black Jeep and trailed her until she’d found a spot somewhere along Essex Street, not once losing sight of her.

How could he miss her? Those strikingly pale eyes shaded by dark lashes, opposing her incredibly fair skin and long, equally dark hair. She was like a walking yin-yang, conflicting shades of black and white; shadows and snowfall.

Her scent still lingered in his car, a faint smell of jasmine. It had been nearly two days, but every time Trystan entered his beloved Camaro, he was instantly inundated with the intoxicating aroma that was Theo. Some perfumes included jasmine undertones, but this was something else entirely; not a perfume-just Theo. Now that he knew she was a witch, he wondered if her persistent scent was part of some spell.

His plan was simple. He would continue to get close to her. Watch her for any signs that she could use magic, as his father had instructed. Perhaps he could charm her enough to let her guard down and divulge information about Elizabeth. After all, she barely knew her aunt: the loyalty there was still fragile.

Trystan thought if he could prove Elizabeth was responsible for murdering his mother, not only would his father spare Theo, as she played no part in that, but in addition, Theo would turn on her aunt. He might be a hunter, but he still didn’t want to see any harm come to the little witch. All he had to do was get inside her head.

The way she is already inside yours? a nasty voice inside his head hissed.

Trystan shuddered; trying to shake the memory of the dream he had the other night-if you could even call it a dream. He had been in the gym in the basement of his home, working through his frustrations, when suddenly, he found himself in the middle of the ocean. He saw Theo floating seamlessly with the gentle waves. She was radiant, as if in her element, and he couldn’t take his eyes off her.

He didn’t know why he had spoken the words he declared to her, but he knew with every ounce of his being that they were absolutely true. She was anything but ordinary. He awoke just as quickly, finding himself back in his home gym, except about an hour had passed.

As Trystan waited in his car, he spotted Theo entering the famous witch shop, Hex. He rolled his eyes. How predictable. Hex was famous. There was another shop in New Orleans.

He was just about to open the door to follow her in, when his passenger door opened, and someone climbed in the passenger’s seat.

A veil of pale hair was visible from the corner of his eye. “Grace,” he said through gritted teeth.

“Like a headache,” he replied. He had avoided Grace since returning from Boston. His brief experience of dating her was akin to dating the Queen of Hearts from Alice in Wonderland. She was impulsive and spoiled. But most of all, she was completely insane.

She laughed. “Well, from what I remember, you enjoyed a little bit of pain,” she smiled wickedly. “So, I guess I should take that as a compliment.”

“What do you want, Grace? I’m busy,” Trystan replied, not bothering to conceal his aggravation.

“If stalking witches is the new definition for busy, then you must be overwhelmed. We could be ‘busy’ doing something else.” Grace leaned over, revealing too much skin through her low-cut shirt. Trystan rolled his eyes: Typical Grace, dressing like a prim and proper Puritan at school then dressing for attention afterward.

Her sickeningly sweet perfume filled his nostrils, causing him to shift away from her. Grace noticed and eyed him coolly, the barest hint of fury in her black eyes.

She made a sound of disgust. “So, it’s true. You are in love with that thing.” She spat the last word out as if her tongue was on fire and getting it out of her mouth would give her some relief.

“In love? I barely know her.” This time, Trystan leaned toward her, causing her to shift back. “Tell your insipid father to stop spreading rumors,” he said angrily.

Grace’s father, Dr. Brian Hopkins, was known to plant seeds of discord and make allegations against the other witch hunting families, especially considering they were hierarchal, and the de Lancre’s and the Hopkins’ continuously challenged each other for the top rank. Dr. Hopkins had probably seen Trystan with Theo and was the snitch who had told his father.

Grace’s mouth twitched; he could see the rage building in her face. She grabbed him by the collar of his shirt with a force that startled him and yanked him towards her.

“Take care of the witch, or I will,” Grace said, every single word dripping with malice. She released her grip on his shirt and smoothed one hand down her long silky blonde hair. She took a deep breath, transforming into the cool and collected girl she outwardly displayed. “And,” she began, her voice turning soft and coy like a little girl, “you know how much I love to play with my things.”

He heard the door pop open and slam shut, leaving only Grace’s threat behind.

Trystan knew Grace was referring to torture. All witch hunting families had their personal histories of brutalization, but the present-day Hopkins clan actually took pride in their techniques and revered their ancestors for their brilliancy. Trystan had learned that Matthew Hopkins, the self-proclaimed “Witchfinder General” and one of the earliest witch hunters, had resorted to unspeakable methods of horror.

At one point, obtaining a confession through torture was outlawed in England, but sleep deprivation was not considered a form of torture. Matthew Hopkins had used sleep deprivation to coax a confession out of one of his victims, keeping the poor woman awake for days. He was brilliant and sadistic, and it seemed Grace had inherited her ancestor’s penchant for causing pain and suffering.

Grace threatening to make Theo her “plaything” had awakened the sense of protectiveness Trystan had experienced last night in his father’s study. He didn’t understand why he felt the overwhelming urge to protect her. Trystan laughed as he recalled Grace mentioning that he was “in love.”

Love just wasn’t in the cards for him. His father would see to it that he married Grace, keeping the families interlocked to breed more “purebred” witch hunters. His father had married his mother out of the same arrangement. Trystan could have other lovers on the side–it was no secret that his father kept his own bed warm with the company of other women even before his mother’s death-which had been another reason for Trystan to despise him. But he knew he would never have the love he had read about in books. He could never love someone the way Edgar Allan Poe had loved Annabelle Lee.

Besides, as he’d told Grace, he barely knew Theo. He thought she was beautiful, sure, but there was a stark difference between lust and love. He was confident that whatever urge that drove him to seek her out would dissipate once he finally slept with her, as it had done with all the others. About the Author
Hello! I’m Nicole Rubino, author of Something Wicked, the first in a four-book series about witches, witch hunters, and everything in between!

I fondly remember Roald Dahl’s James and the Giant Peach as the first book that took me on an adventure, and so, I fell in love with reading and writing fantasy. Another one of my favorite books by Dahl should come as no surprise: The Witches.

My equal love for history propelled me to dive further into the witch hunts throughout Europe and the witch hunts in Salem, which is where I got the idea for my debut novel.

Authors I love and whom inspire me are Leigh Bardugo, Holly Black, Sarah J. Maas, Jay Kristoff and Pierce Brown.