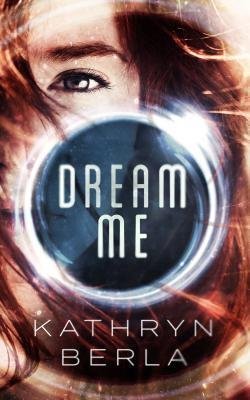 DREAM ME by Kathryn Berla

Synopsis
Zat is a dreamer from the distant future—a time when humans no longer dream and Earth is a desolate wasteland. He dreams of the beautiful Earth of the past, and a fiery-haired beauty named Babe. Against the wisdom of his peers, Zat decides to risk everything to travel back in time and live in Babe’s dreams…

Babe is the perpetual new girl in town. Her father’s job frequently moves the family around the country, and Babe just longs for a place to call home. As she settles into the sleepy town of Sugar Dunes, Florida, Babe begins to have strange dreams of a green-eyed boy named Zat. Night after night, Babe shows Zat her world. But the dreams come at the cost of nearly crippling migraines every morning. Babe’s life outside of her dreams pales in comparison to her growing love for Zat and their time spent together.

But the more time Babe and Zat spend together in her dreams, the more Babe’s pain increases, and Zat begins to question the reality of his existence. How can he live a life with Babe, when all they have is her dreams?

Can a dream become a reality?

My Review
At times, DREAM ME felt like two different tales, but woven together, they tell the story of Babe and Zat, an unusual couple in an impossible situation. Babe’s father is a golf pro, and she and her family move around for his job. The latest move takes them to the Florida coast where she meets the locals over the summer before her senior year of high school. Included are the queen bee, Mattie Lynn and her minions, LeGrand, the poor little rich boy who only comes on his yacht for the summer with his parents, and Mai, the daughter of the owners of the local fish market who befriends Babe. An avid tennis player, Babe takes a job in the tennis pro shop where she helps Mattie Lynn with her charity program, throwing her in the path of other local kids. The move also triggers vibrant dreams where Babe continually meets with a boy named Zat. She’s inexplicably drawn to Zat and during the day, longs for sleep so she can be with him.

Throughout the summer, Babe navigates the waters of new friendships, unusual dreams, and corporate politics when the chairman of the board of the club where she and her parents work has designs on an underage Babe. The majority of the story takes place during waking hours and reads like a typical contemporary novel. The dream sequences are written as blog posts by Babe.What it’s missing, for me anyway, is more time travel. Billed as a young-adult time-traveling romance, I expected more time traveling. Yes, Zat is from the future, but it’s Babe’s story for the most part. Zat’s point of view is told in third-person and is sparse and too brief in my opinion.

Plot
The plot is two-pronged. The first centers on Babe’s dream world and her relationship with Zat. The other is her relationships with the people in her waking world. Even as Babe grows closer to Zat in her subconscious, her friendships with new friends develop and grow. There isn’t much overlap, which is why it feels like two separate stories sometimes. There are some things I would have liked to see more of, though. For one, with something this sci-fi-y, I would have liked to see a little more world building. I didn’t understand how the time travel worked or what the rules were. This became particularly muddled at the end. The other is that I felt like Babe’s relationship with Zat wasn’t nearly as well developed as her relationships with Mai or LeGrand. Even her relationship with Mattie Lynn seemed to have more depth. As a result, I was a little ambivalent about them being together.

Characters
I loved Babe. She’s spunky, fierce, but still believable as a seventeen-year-old girl. LeGrand, Mai and the rest of Babe’s friends are exactly the kind of friends anyone would wish for. But I never got a strong sense of who Zat is, even though we get bits and pieces of his point of view.

What I Enjoyed About DREAM ME
1. Babe. She’s a fantastic young adult protagonist with the right balance of burgeoning independence and insecurities to make her completely relateable.

2. Settings. The author has the ability to bring her settings vividly to life. While I’m not all that familiar with Florida, it was easy to visualize the scenes.

3. Friendship. As the new girl in town, Babe’s blossoming relationships were depicted as organic and authentic.

4. The Concept. I really liked the idea behind DREAM ME, but I felt like it left a lot on the table.

5. Twists. There were a few of unexpected twists toward the end that left me smiling.

Bottom Line
A scifi wrapped up in a contemporary with a few of unexpected twists.

About the Author
Kathryn Berla graduated from the University of California at Berkeley as an English major. She has lived in many different countries in Europe, Asia, the Middle East and Africa. She currently resides in the San Francisco Bay Area.