Welcome to the blog tour for DOYENNE, a stand-alone adult contemporary romance, by Anne Malcom. See below for information on the book, buy links, and an exclusive excerpt. 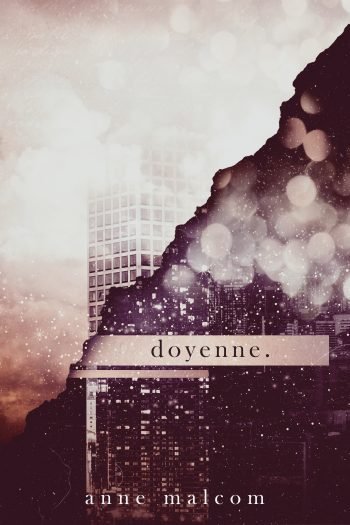 Synopsis
I don’t know what it’s like to feel. To hurt.

The ability was stolen from me in my youth. I consider that theft a gift.

Feelings got in the way when you were building an empire.

I had the empire.

Everything that took over a decade to amass was snatched away in a second.

He killed for me.

But he didn’t save me.

That only meant I couldn’t lose. 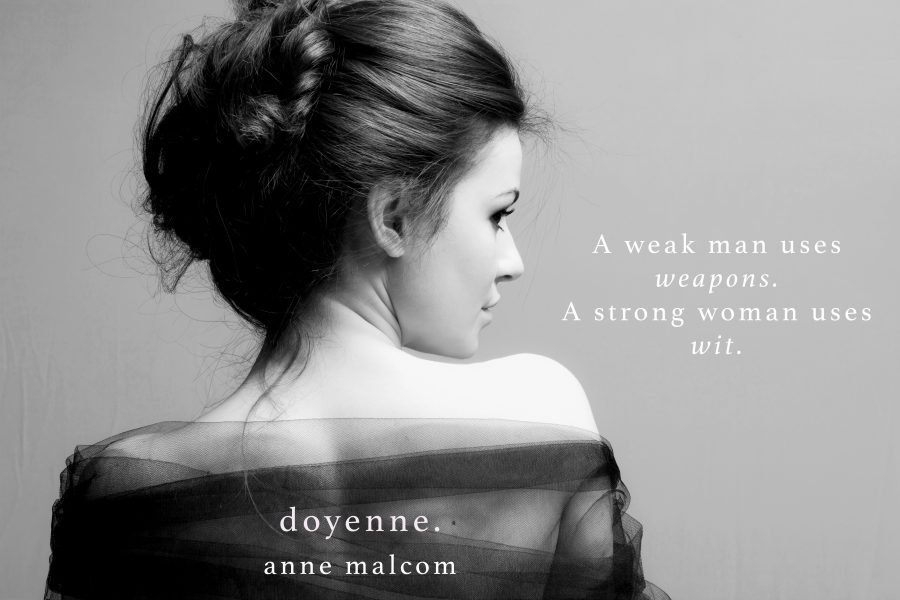 Excerpt
“Do you know what I have a lot of?” I said after the silence that was long enough to make him uncomfortable.

He shook his head, sweat beaded in droplets trailing down his overly tanned forehead.

“Money,” I answered for him, tapping my pen against the desk. “It’s rather crass to say, I admit, but it’s not exactly a secret is it?” I moved my eyes around the corner office boasting million-dollar views of Manhattan.

“Money can buy a lot of things. Cars, jewelry, men…women.” I quirked my brow as roses blossomed at the sides of his cheeks. “Contrary to popular belief, happiness is also on that list, if you know where to shop.” I stopped tapping my pen. “Do you know what money can’t buy, perhaps the only thing other than health and talent?” my voice was flat.

Another head shake. Was he mute? Or was he a very lifelike robot having a computer glitch? Or simply a bully, that had a lot to say in the playground, but nothing to squeak in the principal’s office?

“Time,” I said simply. “Time is a luxury to no one. Everyone has it. Loses it, steals it and wastes it. Which is precisely what you’re doing now. Standing in my office, clutching your masculinity like it’s your prom date’s panties and dripping your perspiration over my favorite rug. I don’t like wasting something I can’t make, earn or control. So how about you listen to what you know I’m going to say without actually making me say it.” I paused and let my words sink in. He can’t have been dense enough not to know why he was here, everyone that worked for me was highly intelligent, and this was his third HR complaint, which was why it was being brought to me.

“You’re a smart man, considering your parents paid for an education that would’ve been more useful as a house deposit,” I continued. “You know why you’re here. And you know the only reason you won’t be leaving here with your potted plant and framed fraternity pictures of your glory days in a box, is that you just so happen to be good at your job. When you’re actually doing it and not living up to every stereotype one could think of from an upper middle class, entitled, and misogynistic white male.” I paused again, wishing I could fire him. No way did I tolerate sexual harassment in the workplace, or any other place, on either side of the gender divide.

“Do I need to say anything else?” I asked. “Or are you going to waste my time some more and make me forget you’re good at your job?”

There was a pause, one that had me quirking my brow in warning.

He left the room quickly. I think he might have sprinted if he wasn’t clutching the last shreds of his dignity.

I didn’t hold an ounce of guilt for that.

He was only simpering and weak in front of powerful women who held his paycheck in their hands. Others, he thought were beneath him. I would have fired him for that alone, but it was very hard to fire someone these days. I could have, I had lawyers on retainer for these very scenarios, but I was tired. Too tired to deal with that. So he got three more strikes than I usually gave. A glimmer of a fourth and he was out. And I’d make sure that he never worked in this city again.

My gaze, of its own volition, flickered past the door to the corner of the room where he stood.

I swallowed roughly as the energy flickered, turned so charged even the letter opener to the left of my trembling hand couldn’t cut it.

He no longer was the statuesque mute he’d been moments ago, and he traveled the distance of my office in long, unhurried steps.

I did nothing but sit and watch until he rounded my desk, yanked my chair around roughly and leaned his muscled arms on either side, boxing me in as he bent down.

“You missed one,” he murmured.

I blinked at him, drowning in his gaze. “One what?” I managed to choke the two words, the powerful CEO from moments before was now a puddle on the floor.

His mouth was so close to mine it brushed it when he spoke. “Passion. You can’t buy that shit.” He moved so his rough stubble scratched my skin and his mouth landed on my neck.

I clutched the arms of my chair as his teeth grazed my collarbone.

“You can buy a lot, Boots,” he continued, voice thick. “Fancy clothes.” His rough hands caught on the delicate silk of my blouse. “Sparkly shit.” They moved up the column of my neck to brush against the diamond studs in my ears before moving back to the arms of my chair. “But you can’t buy an orgasm that makes you fly from this earth the moment I sink my cock inside you.” Wolf eyes met mine. “You can’t buy me,” he growled. Then his mouth claimed mine with ferocity that had me spiraling in my own head, clutching for coherent thought and moaning in protest as his lips left mine. “You can’t buy me, but you fuckin’ own me already.” 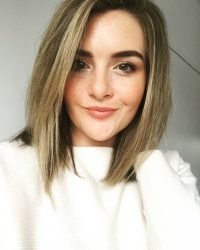 About the Author
Anne Malcom has been an avid reader since before she can remember, her mother responsible for her book addiction. It started with magical journeys into the world of Hogwarts and Middle Earth, then as she grew up her reading tastes grew with her. Her obsession with books and romance novels in particular gave Anne the opportunity to find another passion, writing. Finding writing about alpha males and happily ever afters more fun than reading about them, Anne is not about to stop any time soon.

Raised in small town New Zealand, Anne had a truly special childhood, growing up in one of the most beautiful countries in the world. She has backpacked across Europe, ridden camels in the Sahara, eaten her way through Italy, and had all sorts of crazy adventures. For now, she’s back at home in New Zealand and quite happy. But who knows when the travel bug will bite her again.