Welcome to the blog tour for IN ACTING ON IMPULSE, the second book in the adult contemporary romance series, Silverweed Falls, by Thea Dawson. See below for information on the book and series, buy links, an exclusive excerpt, and details on her giveaway. 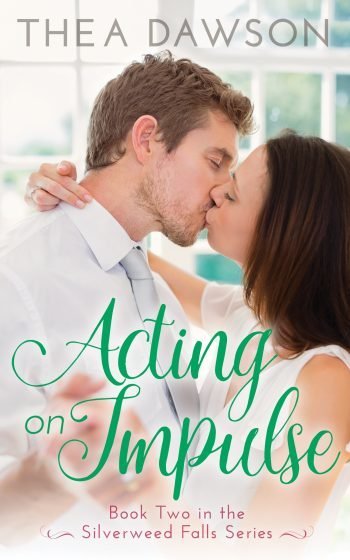 Synopsis
She’s camera shy. He’s a big star. Is love worth the limelight?

Thirteen years ago, Chris McPherson drunkenly declared his love for Joy Albright … right in front of her husband. Though her angry rejection still stings, Chris, now a successful Hollywood actor, has never forgotten his feelings for her. When he returns to Silverweed Falls to direct a summer Shakespeare play, he is thrilled—and a little nervous—to learn that Joy will be managing the play.

Joy Albright’s marriage imploded in a public scandal a year ago when her husband was caught by the press with another woman. All she wants now is to avoid the limelight, but she can’t refuse the request of a dying friend to help save the local theater group.

Reunited, sparks fly. Joy is desperate to avoid more gossip. Chris comes trailed by the tabloids. But neither of them can deny the temptation to act on their impulses.

Excerpt #4
Chris took his position. Victor had blocked the scene so that they began on opposite ends of the stage and slowly circled each other, coming closer and closer with each pass until they were near enough to kiss. He cleared his throat and began.

“Lady Beatrice, have you wept all this while?”

“Yea, and I will weep a little longer,” replied Joy, back in character despite the sloppy t-shirt and denim cutoffs.

They circled around each other, speaking the lines that drew the two characters into each other’s arms.

“I do love nothing in the world so well as you: is not that strange?” said Chris. There was a slight tremble in his voice that had never been there before.

More lines, a tighter circle. They were within a step of each other now.

“Why then, God forgive me!” Joy/Beatrice cried.

“What offence, sweet Beatrice?” asked Chris, his heart pounding suddenly, like it never did in front of an audience.

Joy met his gaze, her expression full of longing. “You have stayed me in a happy hour: I was about to protest I love you.”

They were so near each other now that he could see the streaks of gold in her green eyes. She dropped her gaze as he spoke his line: “And do it with all thy heart.”

She lifted her eyes to his again and they took the last, fatal step toward each other. “I love you with so much of my heart that none is left to protest,” she said, managing to drop her voice and project it at the same time so that it would be audible for the last row yet still sound intimate.

He leaned in for the kiss. 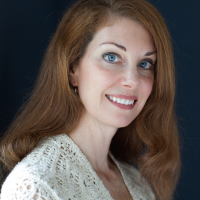 About the Author
Thea Dawson has lived in Rome, Tokyo and London, and spent much of her twenties traveling around the world. Eventually she met the love of her life and settled down in the Pacific Northwest, where she now lives with her husband and three children.

After a checkered career which included stints as an English teacher, librarian and editor, she now writes full time, telling tales of romance and adventure.