Welcome to the blog tour for AFTER THE FALL, the second book in the adult contemporary romance series, Seven Winds, by Katy Ames. See below for information on the book and series, buy links, an exclusive excerpt, and details on her giveaway. 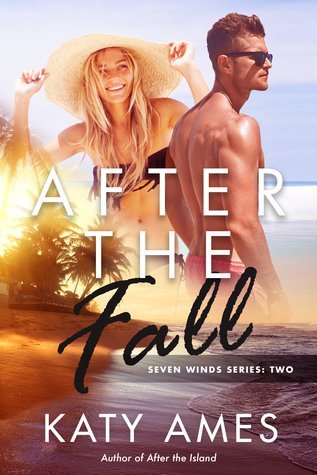 AFTER THE FALL (Seven Winds #2) by Katy Ames

Synopsis
If there was one man in the world Grace Fitzgerald never wanted to see again, it was Mark Donovan.

Sinfully handsome, famously flirtatious, unerringly cocky. Paragon of men. Archetype of entitled a**holes. As a guest at her luxury hotel, Mark was impossible.

As the new owner of her hotel, he’s become a nightmare. The kind that wakes Grace in the middle of the night wishing she could forget how right his lips felt against her own, how tempting his fingers were against her skin.

But for all of the challenges that Mark and Grace face working together, nothing can prepare them for the undeniable attraction that flares every time they battle for control. Or the secrets that linger in the luxury of the Seven Winds Villa.

With no way of escaping each other or their pasts, can they possibly survive life on the island after they fall?

A steamy, standalone romance from Katy Ames, author of After the Island. Excerpt #4
For a moment Grace and Mark studied each other, nothing but a few inches of air and progressively shallower breaths separating them. Grace could feel the warmth of his body through the fine fabric of her shirt, the soft weave of his dress pants a whisper against her thighs. It would take the smallest movement, the simplest slip, to touch him, to brush her fingers against the golden skin of his wrist exposed by the turned-up cuff, to angle her head just right so that she’d dip into the curve of his neck and feel the satisfying abrasion of his stubble against the smoothness of her cheek.

Grace could feel it, her body giving way to the pull of his. Despite the words and battles and omissions and high-handedness, Grace could still feel the pressure of Mark’s legs beneath her, the tremble of his fingers against her shirt, the pleading in his eyes when he demanded so many months ago she take it off.

Grace was falling and she had to stop.

“Three.” It came out choked, only a half-word, the first syllable swallowed by the dryness in Grace’s throat. Coughing, she stepped back and tried again. “The third condition. Whatever happened that day I found you on the floor.” Grace waited for the haze to clear from Mark’s face, for his head to bob slowly, telling her he was listening. “It doesn’t happen again. We’re colleagues, working to achieve the same thing. There’s no room for anything else between us. Agreed?”

She stared at Mark. He needed to agree. She really needed him to agree.

“You’ll keep your hands to yourself.”

“I’ll keep my hands to myself….” Mark’s voice drifted off as he ran a greedy look down her body, flames licking across Grace’s skin as he progressed ever so slowly from neck to knee, breasts to hips, waist to toes. When his eyes returned to hers they were hard and dark, the blue as intense and alluring as the pre-dawn sky. With one step, Mark swallowed the space between them, and Grace was sure she could feel his voice in her own chest when he spoke. “I’ll keep my hands to myself, if you do the same.”

Grace wanted to baulk, to scoff and push him back and tell him he was being ridiculous. He was the one she needed to be careful of. Not the other way around. But her remaining sliver of sanity told her if she dared touch any part of this man neither of them would survive unscathed.

Any other time she would’ve been embarrassed by the shallowness of her voice, but at that moment her only concern was escaping. Escaping the villa, escaping Mark, and escaping the heady haze of lust and longing and lunacy surrounding them.

“Go, Grace.” Mark’s voice was so quiet she barely made it out over the pounding in her ears. But Grace didn’t need to hear what he said; his face, angular and beautiful, open and exposed, said everything she needed to know. “Go, before….”

Grace didn’t wait for him to finish. Without giving Mark a second look, she turned on her heel and practically ran from the villa, holding her breath until the golf cart cranked to life beneath her and she knew that when she inhaled the only things she would taste were the sun and the salt and the flowers drugging the air. About the Author
Katy Ames has spent most of her life on the East Coast and hopes to spend more of it in the UK. In part, so she can indulge in her serious plaid obsession. There isn’t a teenage drama on the CW or a period British TV show she hasn’t binge-watched at least twice. And she can be persuaded to do most things with the promise of bourbon, coffee, chocolate, or a nap, not necessarily in that order. Katy is mom to a small human who has an obscene amount of energy and a blissful ability to ignore swear words, and wife to a man whose reading habits are far too serious. Katy and her family reside in Washington, D.C., a city she where never planned to live and loves so much she’d be happy to talk about for hours. Just ask.

Katy writes contemporary romances that feature heroes who are strong but not so silent, heroines who aren’t afraid to kick ass, and stories that get a little messy before they end happily ever after.