Welcome to the blog tour for COWBOY, CROSS MY HEART, the third book in the adult contemporary western romance series, Heart of Texas, by New York Times and USA Today bestselling author, Donna Grant. See below for information on the book, buy links, an exclusive excerpt, and details on the giveaway. 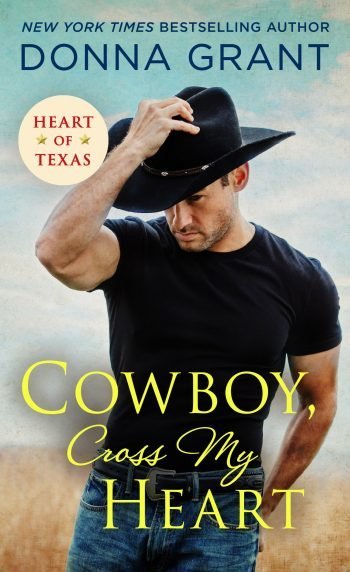 COWBOY, CROSS MY HEART (Heart of Texas #3) by Donna Grant

Synopsis
New York Times bestselling author Donna Grant takes you deep inside the Texas rodeo scene in the second book in her Heart of Texas series, Cowboy, Cross My Heart, where danger and desire ride side by side. . .

Naomi Pierce isn’t the type to let a cowboy sweep her off feet. It’s not her first rodeo, after all. But when she returns to her Texas hometown, she can’t help but be swept up again in the rough-and-tumble world of hard-riding, bronco-busting good-ol’-boys she loved as a girl. She might be here to photograph her Rodeo Queen best friend. But it’s one fine-looking cowboy who really captures her eye…

Brice Harper is all man, all muscle, and all heart. From the moment he rides into the stadium, he can’t help but notice the beautiful stranger with a camera watching him from the stands. It doesn’t take a zoom lens to see the sparks of instant attraction. But things really heat up when he meets Naomi up-close―and he discovers that someone is stalking her friend. Brice wouldn’t be any kind of cowboy if he didn’t offer to help the ladies out. But can the rough rider keep this spirited shutterbug out of danger―without risking his heart? 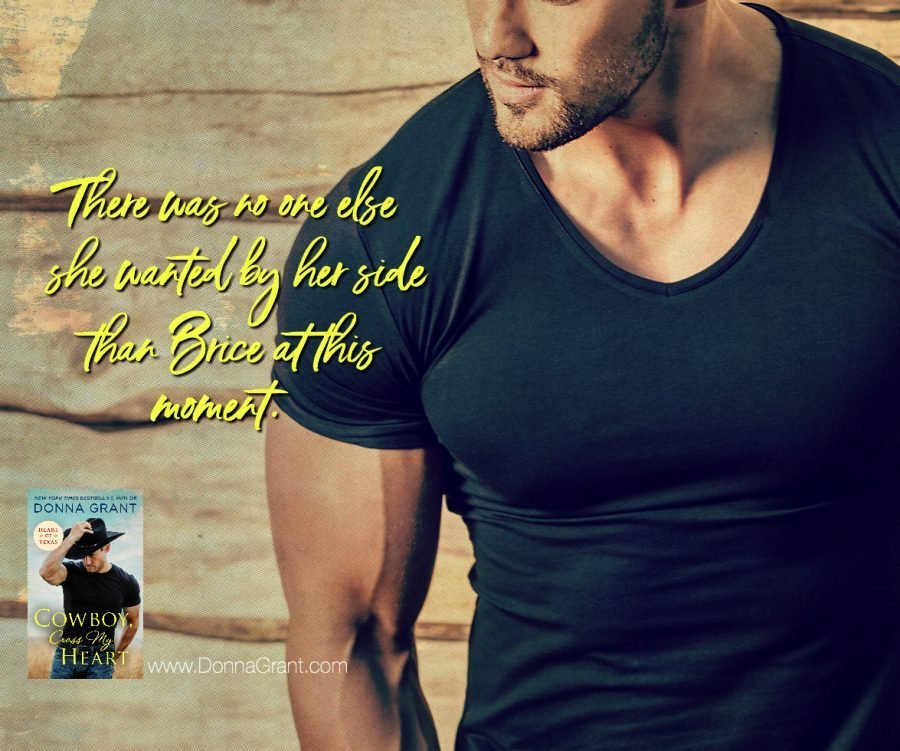 Excitement rushed through everyone as the lights suddenly cut out in the arena. Naomi slid to the edge of the metal bench in the darkness, her heart kicking up a notch as silence fell over the crowd of several thousand. The only sound was the occasional stamp of a hoof from the animals or the jingle of a bridle.

A spotlight came on and swung to the gates. It had been years since Naomi had been to a rodeo, but it took just a few seconds for the memories of that splendid time in her life to fill her.

Seemingly as one, everyone rose to their feet and put their hands over their hearts. Her mind halted at the first strings of the national anthem that played loudly over the speakers. The first horse came walking out of the gates, with the American flag being held by none other than Naomi’s best friend, Whitney Nolan.

Behind Whitney was another woman with the Texas flag. The two made their way around the edge of the arena several times, the horses moving from a walk to a trot to a gallop, and then a full-out run with the flags rippling in the wind. As Whitney neared her, Naomi flashed her a smile, the tears gathering.

Naomi blinked through them as her mind went back to high school and the third member of their group, Suellen, who had dreamed of being exactly where Whitney was. It was one reason Naomi had returned now.

Besides, it had been too long since she had done more than talk to her best friend over the phone or visit her mother.

Whitney and the other woman halted in the middle of the arena at the crescendo of music. The spotlight caught on the rhinestones of her friend’s white chaps with writing claiming Whitney the Rodeo Queen of Baxter County.

Naomi grinned at the large crown fitted on the white Stetson hat atop Whitney’s long, golden waves. When the anthem concluded, applause erupted as the lights came back on.

After a tribute to the military and a prayer had commenced, Naomi discreetly took pictures of everything. She resumed her seat and watched Whitney return through the gates as the event began.

Naomi laughed when the rodeo clowns rushed into the arena to get the crowd going. She snapped photos while enjoying the show. Part of her wished she had made it in time for the day rodeo when she could have seen the youngsters doing the steer racing.

When it came time for the barrel racers, Naomi’s heart missed a beat. This had been her event. And she had loved every second of it.

With every rider that rushed through the gates and worked their horse around the barrels, she held her breath until they crossed over the finish line. When the final rider finished, the scoreboard went up, and her camera nearly slipped through her fingers.

Her time had yet to be beaten. There were some that came close, but somehow, she was still the rider to beat. Even after all these years.

She nearly forgot her camera when the event shifted to team roping. Naomi paid no attention to the announcer as he spouted off the names of the first contestants while the clowns hurried to remove the barrels.

Naomi lifted her camera and looked through the viewfinder. She took rapid shots to get everything from the moment the gate was pulled and the steer rushed from the header box, to when the lead roper—called a header—got the rope around the steer’s horns. Once the header had the steer turned, the heeler would rope its back legs.

It was a timed event, so it was always fun to watch who was the quickest. Naomi loved that women competed in the teams, as well. Some duos were mixed, some not.

Naomi swung her camera to the next two up for the event and snapped a couple of pictures.

“Ladies and gentlemen,” the announcer said over the speaker. “The winners of the past three years are once more in the arena. Let’s give a warm welcome to the Harper brothers, Brice and Caleb.”

The applause was deafening. Naomi looked down at her camera and pulled up the picture she’d just taken. She stared at the guy in a tan Stetson and a red and orange plaid button-down who looked at the arena as if it were his battlefield, while the other wore a mischievous grin that had obviously broken many hearts, along with a brown Stetson and a chambray shirt.

“These brothers are the ones to beat,” the announcer finished.

Naomi had to admit, both were handsome, but there was something about the serious one that kept drawing her gaze. For the first time, she pulled her head away from her camera to the gates and watched as the cowboy maneuvered his horse into the header slot.

Somehow, she wasn’t surprised that he was in that position. Was he the eldest? She imagined he might be.

She lifted her camera again and took picture after picture, shocked at how skilled—and quick—the brothers were. No one seemed surprised when they won the first round of the event.

When she lowered her camera, her gaze remained on the serious one and strayed to his ass. Because there was just something about a man in Wranglers that she couldn’t resist.

About the Author
New York Times and USA Today bestselling author Donna Grant has been praised for her “totally addictive” and “unique and sensual” stories. Her latest acclaimed series, Dark Kings, features a thrilling combination of dragons, Fae, and immortal Highlanders who are dark, dangerous, and irresistible. She lives with her two children and an assortment of animals in Texas. Visit Donna at www.DonnaGrant.com. 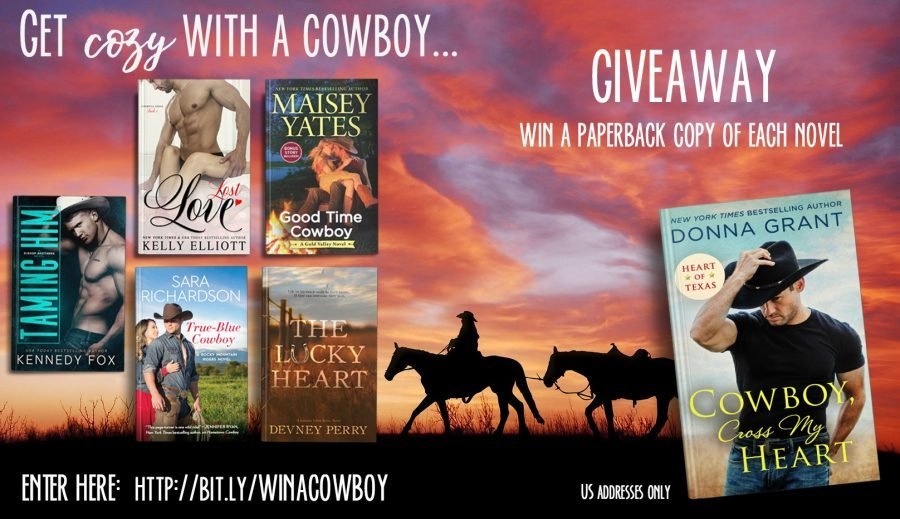