Welcome to the blog tour for HUNTING DANGER, the fifth book in the adult romantic suspense series, Redemption Harbor, by New York Times and USA Today bestselling author, Katie Reus. See below for information on the book, buy links, an exclusive excerpt, and details on her giveaway. 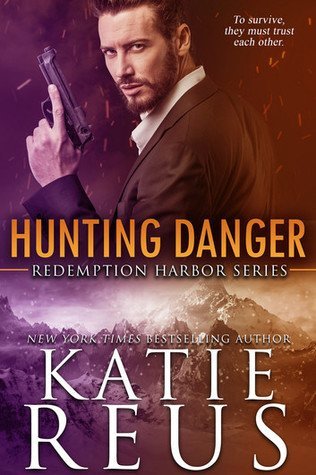 Synopsis
The one woman he wants…

When a childhood friend needs help, Nova doesn’t hesitate. They endured the foster system together, forging a bond Nova can’t ignore. Relying on her friends from Redemption Harbor Consulting—including Gage, the computer genius she’s falling for—is out of the question. She used to work for the CIA and she’s trained—she can handle this. Besides, the whole team is working on their own important jobs. She’s not going to drag anyone away when she’s not sure it’s necessary.

Is the one he can’t have…

When Nova asks for time off out of the blue—and use of the company jet—former Marine Gage takes note. Of course, he notices everything about Nova. But as one of her bosses, his growing attraction to her is a line he won’t cross. However, that doesn’t mean he’ll let her run straight into danger—and a quick hack of her computer proves she’s gotten in over her head. Gage is coming along for the ride, whether the sassy assistant likes it or not. He’ll do whatever’s necessary to save her friend…and keep Nova out of the clutches of a lethal enemy who won’t hesitate to kill anyone who gets in their way.

Excerpt #4
Nova smiled at Jim the pilot as she reached the short set of stairs to the Learjet. “Thank you for getting here so quickly,” she said, even though she knew it had absolutely nothing to do with her.

No, the guy was on standby because Brooks Alexander paid him a crapload of money. It was his job. But there was no reason she couldn’t be polite.

He nodded once, his gaze sweeping over her appreciatively, but thankfully not in a creepy way, before he straightened. “Glad you’re here. I’ve already filed the flight plan and done the preflight checks so we’re ready to go as soon as you settle in.”

She quickly moved up the stairs and froze the moment she ducked inside the plane—when she saw Gage sitting in one of the plush leather seats, a laptop in front of him.

“What the hell are you doing here?” Immediately she winced at her loud tone.

“I think I should be asking you who the hell this is?” He turned his laptop around on the small table as she stomped inside. She was vaguely aware of the pilot ducking inside then closing the hatch. But she ignored him as he headed to the cockpit, focused only on Gage.

She wasn’t exactly surprised to see Brody Kingston’s face on the screen. Damn it, she should have done a better job of erasing her tracks. Or maybe Gage shouldn’t have been such a sneak. “You checked up on what I was doing?”

“Yep.” There wasn’t one ounce of apology on his face either. His annoyingly handsome face. That she wanted to punch just a little right now.

He snorted. “Don’t change the subject.”

She glanced over her shoulder as the engines rumbled to life. Then she turned back to Gage. “You need to get off this plane. You’re not invited.”

He stood, though he had to bend down slightly to avoid hitting his head on the roof as he towered over her. “I’m going. Now start talking.”

Glaring at him, she took a seat across the aisle instead of sitting in front of him or next to him. Then she crossed her legs away from him as she strapped in.

“You can give me the silent treatment all you want,” he said, dropping back into his seat. “I can just guess what you’re doing. Did you date this guy?” He seemed to struggle with the question.

Frowning, she looked at him. “Seriously? That’s the best you could come up with? No, I didn’t date him. I don’t know him. My best friend is engaged to him. And something is wrong.” She sighed, realizing it was better to simply tell Gage everything she knew, which wasn’t a whole lot. So she quickly ran through the texts she’d received from Layla.

In the background, the pilot let them know they would be taking off soon and to make sure they were strapped in. Both she and Gage ignored him.

Once she was done, Gage seemed somewhat more at ease. “That is definitely strange. Why didn’t you just come to one of us? We would have come with you. Obviously.” Now that frown was back and even deeper than before. He looked all sexy when he got frustrated like that, deep in thought.

Something she didn’t care about. She didn’t.

About the Author
Katie Reus is the New York Times, USA Today, and IndieReader bestselling author of the Red Stone Security series, the Moon Shifter series and the Deadly Ops series. She fell in love with romance at a young age thanks to books she pilfered from her mom’s stash. Years later she loves reading romance almost as much as she loves writing it.