Welcome to the blog tour for MAGIC HEIST, the second book in the young adult fantasy series, Fairy Trafficking, by Mary Karlik. See below for information on the book and series, buy links, an exclusive excerpt, and details on her giveaway. 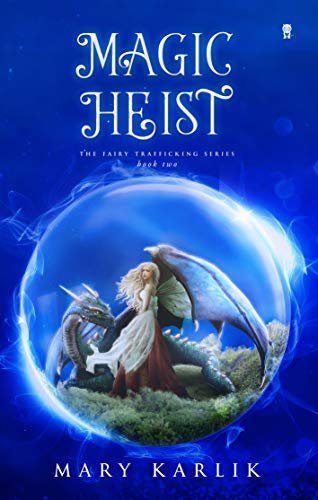 Synopsis
Layla rescued fairies that had been kidnapped and brought the human world. But now they can’t find their way back to the magic realm and time is running out.

Layla is a powerful fairy with magical ability that stretches beyond throwing spells. But with all that power, she still doesn’t know how to get over one-hundred fairies back to the magic realm. With their magic gone, the rescued fairies have no immunity to protect them from the toxins of the human world, and they’re slowly dying.

To find the path home, Layla knows she must team up with the one man who can make her insides quiver with an accidental brush of his fingertips. The same man who’s alter ego dragon is the natural predator of fairies. The man she knows will give his life to keep the fairies safe—Scotland’s finest Specialist Crime Division leader, Ian Cameron.

Ian has only been a dragon shifter for a few days. He struggles to control the dragon spirit locked inside his human form, doesn’t know what magical powers he may or may not have, and has never been to a magical world. But none of those things frighten him as much as the little spark that ignites in his soul when the half – human fairy is around.

But this little fairy is no Tinkerbell. She is brave, powerful, and can wield a sword like a medieval knight.

With growing feelings toward Layla, he couldn’t refuse to help her get the fairies back to the magic realm if he wanted to. The problem is the dragon who lives inside him would like nothing more than to feed his appetite with all of those little fairies—especially the half human one who killed its leader.

“Mary Karlik, is truly a hidden gem of a writer.” – I Am the Bookworm

Excerpt #3
Layla’s breaths came sharp and fast. Her heart dropped to her stomach and her blood to her feet.

Her knees dipped. She held her breath.

Killing Fauth. Saving all those fairies hadn’t made a dent in the fairy trafficking scheme.

Ian tightened his hold and peered at the woman in red. “She’s been waiting for this moment for so long.” He turned to Layla and looked directly in her eyes. She got the message loud and clear—get a hold of yourself before you blow our cover. He spoke to her in a soft coaxing voice. “Take your time, love. We don’t have to make a decision right away.”

Layla’s hands trembled so hard she was afraid the woman would get suspicious. She wrapped her arm around Ian’s waist and drew in a sharp breath. “Full fey.” She said the words with wonder in her voice as if she’d never seen them before. “Can you tell me about the one in orange?”

The woman glided to the fairy. “Isn’t she lovely? She’s from the Paeonia flower clan. Their magic is specifically known for creativity. Our aspiring writers and artists have great success with them.”

The woman swept her arm toward a blue poppy fairy. “Aren’t her wings beautiful? The darker the blue, the stronger the magic. She is a premium model. Her magic is a powerful broad spectrum. Money, fame, intelligence. This fey can deliver your greatest desires.”

Layla’s stomach knotted, and her throat was so dry she wasn’t sure she could speak. She swallowed and tried to look awestruck and not sickened by what she saw. “What do you think? I can’t decide between the two.”

Ian smiled. “Why not both?”

The elf-woman’s eyes glowed, and she flashed a broad smile. “If you’re interested in our male fairies, we have a special on the Thistle variety.”

Layla’s heart went to her chest, and she took a step back. She couldn’t help it. Thistle was her clan.

The woman led them to the opposite side of the room. “Don’t let the name put you off. The lads have good strong magic.”

Layla stared at the lads who’d been placed side by side. She knew them. Robbie and Fergus. They were schoolmates of Esme—and they’d bullied Layla for being half-human. 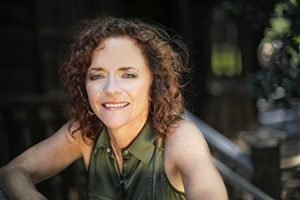 About the Author
Mary Karlik has always been a dreamer. When she was a teen, she read The Lion, The Witch and the Wardrobe, and then sat in every wardrobe in her Nanna’s home, trying to open the door to Narnia. She didn’t find it, but she did discover her voice as an author: one filled with her young adult self, and grounded in her roots as a Texan and her Scottish heritage, nourished by obscure Scottish folklore.

You can find her Texas roots in her YA contemporary romance Hickville series , which has been described as “100% solid storytelling,” and begins with Welcome to Hickville High, a “lovely story about growing up.”

She digs deep into her Scottish roots – there is magic there, she just knows it – for the forthcoming YA epic fantasy Fairy Trafficking series, beginning with Magic Harvest.

She makes her home in the beautiful Sangre de Cristo mountains of Northern New Mexico where she is a certified professional ski instructor, but she also loves visiting Scotland where she is currently studying Scottish Gaelic at the University of Highlands and Islands in Skye. Mary also earned her MFA in Writing Popular Fiction from Seton Hill University, has a B.S. degree from Texas A&M University, and is a Registered Nurse.

Mary currently serves as the President of the Young Adult Chapter of Romance Writers of America and looks forward to raising a glass or two of gin and tonic with her fellow writers every year at RWA’s national convention.