Welcome to the blog tour for OFF PLANET, the first book in the young adult dystopian series, Aunare Chronicles, by USA Today bestselling author, Aileen Erin. See below for information on the book, buy links, an exclusive excerpt, and details on her giveaway. 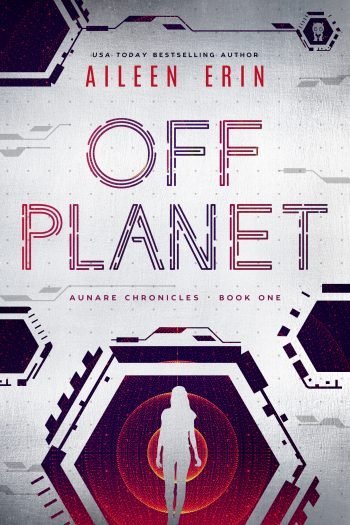 In an all-too-plausible future where corporate conglomerates have left the world’s governments in shambles, anyone with means has left the polluted Earth for the promise of a better life on a SpaceTech owned colony among the stars.

Maité Martinez is the daughter of an Earther Latina and a powerful Aunare man, an alien race that SpaceTech sees as a threat to their dominion. When tensions turn violent, Maité finds herself trapped on Earth and forced into hiding.

For over ten years, Maité has stayed hidden, but every minute Maité stays on Earth is one closer to getting caught.

She’s lived on the streets. Gone hungry. And found a way to fight through it all. But one night, while waitressing in a greasy diner, a customer gets handsy with her. She reacts without thinking.

Covered in blood, Maité runs, but it’s not long before SpaceTech finds her…

Arrested and forced into dangerous work detail on a volcano planet, Maité waits for SpaceTech to make their move against the Aunare. She knows that if she can’t somehow find a way to stop them, there will be an interstellar war big enough to end all life in the universe.

There’s only one question: Can Maité prevent the total annihilation of humanity without getting herself killed in the process?

Excerpt #2
I’d never been happier to be home as I was that night. Roan had paid the exorbitant cab fare and then left on foot for Starlite as soon as I’d entered the apartment building. He’d asked me to join him, but the close call with the cop was almost more than I could handle. All I wanted to do was hide in my darkened room for the next day or ten. But as I approached the front door of our apartment, voices seeped into the cement-lined hallway.

For a second, I dismissed them, but Mom’s voice rose above a deeper one, and I stopped walking.

We rarely had anyone over at all and never at this hour. Something was going on, and it couldn’t be good.

I tiptoed the rest of the way, pressing my ear to the door.

“I tried to contact you. I really did.” Mom’s voice was muffled, but I could make out her words. “But how could I know if he’d come for Maité after all these years?”

It felt like something slithered around my chest and tightened. Someone had come for me. But who?

Between the next three heartbeats, a few scenarios ran through my mind.

One. The cop from earlier had sent another officer to bring me in, but STPF didn’t move fast, especially for an idiotic ticket.

Two. SpaceTech had found us. Two of Earth’s Most Wanted. But if that were true, then there would be fighting and screaming and the sounds of my mother begging for them to leave me alone.

Then the third idea came, and I took a big breath.

There was only one other possibility. They were here. The Aunare were here. I’d stopped dreaming years ago that my father or the Aunare would show up to rescue us. I wasn’t sure what this meant except that my life was about to change in a huge way.

The fluttering in my stomach started small and crescendoed into thousands of flying butterflies. I wasn’t sure if it was excitement or nerves, but specifics didn’t matter.

I slid my backpack off my shoulders and unlocked the door. 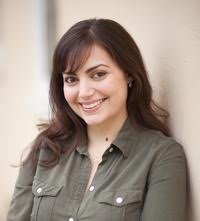 About the Author
Aileen Erin is half-Irish, half-Mexican, and 100% nerd–from Star Wars (prequels don’t count) to Star Trek (TNG FTW), she reads Quenya and some Sindarin, and has a severe fascination with the supernatural. Aileen has a BS in Radio-TV-Film from the University of Texas at Austin, and an MFA in Writing Popular Fiction from Seton Hill University. She lives with her husband in Los Angeles, and spends her days doing her favorite things: reading books, creating worlds, and kicking ass.