Welcome to the blog tour for PRIMAL INSTINCT, the first book in the adult paranormal romance series, Prowlers, by Ally Parker. See below for information on the book, buy links, an exclusive excerpt, and details on her giveaway. 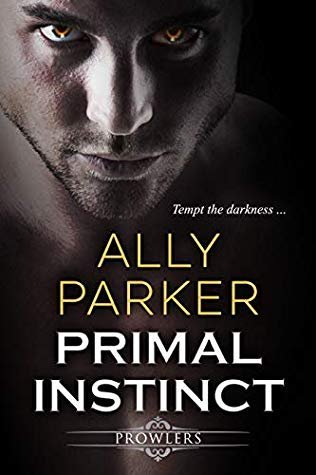 Synopsis
Freedom has been a pleasure denied to Mackenzie for the last five years. Forced to do the bidding of a crazed man to keep both her sister and her self alive, she is sent on a mission to infiltrate a group of people. Payment; their release. The only problem, no one mentioned they weren’t human. Or, that she would be drawn to a certain sexy, addictive male.

Which will she decide, her heart? Or her freedom?

In a world filled with despair, Jaxx’s only chance to save his humanity is tethered to a woman he hasn’t met. Finding her in an underground facility with his kidnapped protégé, was the last place he thought to find his savior. In a web of corruption, he will have to find the truth and convince his mate, she is his.

Before it’s too late.

Excerpt #1
Jaxx coiled a hand around Kenzie’s arm, and escorted her toward the cells, his gut clenching tighter with ever step. Once they had returned to the compound Flynn had graciously delivered some jeans, and secured the vehicle out of sight. Seb struggled leading Kali though the tunnels. Seeing Kali was akin to seeing a ghost. He’d been haunted about abandoning the she-wolf every damn day since he’d escaped the Outlaw pack. Sure he’d tried finding her over the decades, but by the time he’d heard whispers of the Outlaw’s damage, they were long gone.

His chest rattled, a growl lodged deep inside. Like he had every other minute, his gaze sought out his mate. How could his mate betray him, betray Shadow Moon? Damn his chest tightened, and he reached up and palmed it. The only thing keeping him together was feeling Kenzie’s skin under his hand. His beast ripped its claws on his insides trying to finish the mating with his female. Betrayal or not — the wolf didn’t care. No matter how pissed he was finding she had fled, putting herself in direct danger, risking not only her life, but his—he still needed her.

“Are we good?” Seb’s eyed him under pinched brows.

It took Jaxx a second to realize he was growling. He fought for control, and clamped down on his wolf, and grunted. Maybe he should lock himself up? Stupid animal couldn’t understand why he wasn’t luring his female to complete the mating. Kenzie’s skin was soft beneath his hand and she smelled like hope. He yanked her closer, needing more of her against him. She sucked in a breath, but didn’t look at him. Why wouldn’t she meet his gaze? Why hadn’t she begged for forgiveness? A dark accent cut across his glyph. The new marking a stark reminder he was on borrowed time.

They approached the cells. Quinn was absent—probably questioning Ryker’s male. Seb opened the cell Kenzie slept in the night before, and maneuvered Kali into the room. Seb grabbed the silver collar, the heavy retractable chain rattled against the wall.

Freezing in place, Kali paled, her gaze shooting around the room and landing on him. “Please, Jaxx. Don’t do this. The Outlaws, they’re after me. I didn’t have a choice.”

Jaxx ground his teeth. Damn it. He swallowed down the empathy tugging at his insides. Kali was working for Delmac. Delmac were not only inhumane, but a risk to their kind. Kenzie’s fear stung his nostrils. She backed into him. “Jaxx. Wha… what are you doing?”

“Securing a threat.” His jaw pulsed. Even if he wanted to, there was nothing he could do for Kali. Faster than Jaxx had seen him move before, Seb lunged forward and locked the metal collar around Kali’s throat.

“Save it for someone who cares,” Seb spat, and tugged on the chain, testing the metals strength.

Damn, he felt just as evil as his father. Did Kali have anyone who cared? Things had been tough when he’d been with the Outlaws. His father was a ruthless, sadistic, bastard that abused his position of alpha, and took special pleasure in playing with the she-wolf. He hesitated. Maybe this wasn’t the best idea. Vanilla teased his senses and he glanced down to Kenzie, her eyes wide, filled with terror. He would do anything to help his mate.

Kenzie tensed in his grasp. “Why are you doing this?”

He pushed her against the wall. She didn’t need to worry about Kali. Kenzie had her own trouble to deal with. Fire scorched his skin, and another mark fan across his shoulder. The guilt eased in his chest. Justice would be served.

“We do what has to be done.” It was as simple as that.

About the Author
Paranormal romance author, Ally Parker brings you dark, dangerous, and deadly tortured heroes and the women strong enough to save them. Her action packed writing will keep you turning the page until the very end.

When not writing her heart pumping paranormal romance, Ally is a nurse by day and a mother twenty four seven. If she’s not working on her next book, you’ll find her practicing archery (in case of a zombie apocalypse), chasing her kids or storms to capture amazing lightning shots. In her down time, she normally is reading a vampire or shifter book, hanging out with her family or feeding her social media addiction.