Welcome to the blog Tour for SIREN SONG, the third book in the young adult paranormal romance series, The Chameleon Effect, by Alex Hayes. See below for information on the book and series, buy links, an exclusive excerpt, and details on her giveaway. 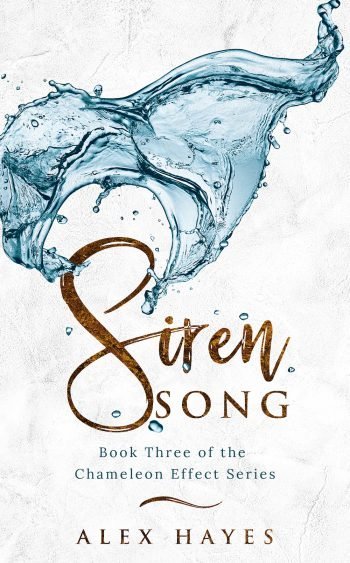 He’s a member of the most scorned profession in Hollywood, but he’s good at it, and a hard-ass to boot.

He might also be called an ambulance chaser, though not for the disreputable reason he chases celebrities. Connell has the ability to heal, and at the sound of a siren, he is drawn to those in need.

Life is just fine until his pushy paparazzi nature almost gets someone killed.

Rowan Bren suffers post-traumatic stress and a permanent headache following a near-death experience at the hands of her mortal enemy. After months, she still isn’t right, but she won’t be held back from seeking her bond mate, Con, any longer.

She travels to Los Angeles motivated to help her friend, Idris, with his brilliant plan to locate their missing people. But Rowan’s top priority in the City of Angels is to find Con. She doesn’t know where he lives, but she’s not worried, because her crystal will lead her straight to him.

When she trips into his world, she finds a man so different from the person she expects, she fears he might not be Con at all. That he might be possessed by an evil force like the one that almost killed her.

Siren Song is the third novel of the Chameleon Effect series.

Excerpt #3
The sirens get closer. I’ve a few minutes at most before the emergency vehicles arrive.

I dart, light and birdlike, up the whitewashed stairs to peer through the back door window of a second-story apartment.

An elderly woman in pants and a blue sweatshirt lies on the kitchen floor, a Life Alert bracelet visible below her right cuff. If it weren’t for that wristband, an ambulance wouldn’t be on its way and I wouldn’t be here.

I lift a hand to the doorknob—unlocked. Breathing a sigh, I slip inside silently, the morning light streaming through me.

One touch to her head and I sense the problem. Lesions in the brain, most likely from a stroke. I check her heart. Beating. Rapid but strong.

Dropping to my knees, I push my voluminous wings out of the way and cup her head of fluffy white curls in my palms. The scent of Nivea and cocoa butter hits me.

I shift my attention to the work at hand. Healing flesh isn’t difficult. Surprisingly, internal injuries are easier to mend than epidermal ones. Bone and tendon damage are the toughest to fix.

A couple of minutes is all it takes to repair the burst blood vessels and damaged cells, and restore blood flow to the compromised areas of the brain. Her breaths deepen and she stirs.

Time to get out of here. Just need to unlock the front door so the paramedics can get in without breaking anything.

I slip through the peach-colored apartment. The place has seen better days, but it’s neat and clean. I reach the door as the sirens cut. An ambulance is right outside, two stories below. I release the chain, unlatch the deadbolt and turn the doorknob lock.

Good to go, I hurry back through the apartment. My wing catches the edge of a table, rattling knickknacks. I save a porcelain statue of Mary holding Baby Jesus, set it straight and rush into the kitchen.

The old lady’s sitting up, rubbing her head. I left the swollen bump on her cranium resulting from the fall, a surface wound that will heal quickly on its own. If I healed every injury, the paramedics might get suspicious.

While her back is turned, I pull open the rear door, but its soft squeak makes her look around.

My breath falters. I’m invisible, but being stared at disturbs me. Hopefully, she’ll put the open door down to the wind.

She squints in my direction as I tease the door wider. Sunlight floods the kitchen, turning the discolored linoleum tiles at my feet bright white.

A gentle smile lifts her lips. “Thank you, dear.”

A sharp knock at the front door.

“Hello? Anyone in there?” comes a muffled shout. “Emergency Services. We’re responding to a Life Alert alarm.”

The lady glances in the direction of that voice, then returns her gaze my way. She can’t possibly see me.

Her smile widens. “Now, off you go, angel. I’m sure you’ve got plenty more people to save today.”

Without further hesitation, I slip through the door, race down the fire escape and take off from the alley.

Flight is the only antidote to an experience like that.

Did she spot me?

It was the open doorway, the bright shaft of sunlight. Who wouldn’t imagine a celestial being had just paid a visit? I might have myself, and I don’t believe in angels. 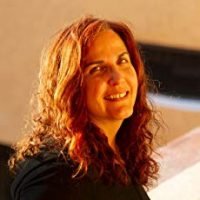 About the Author
Alex Hayes wrote her first fiction story when she was twelve. Inspired by her mother’s storytelling, she began work on her first novel, Ice Cracks, at eighteen.

She received a Bachelor of Arts degree in English, Creative Writing from San Francisco State University. In her twenties, she moved from Marin County, California to Boston, Massachusetts, where she built a career as an IT professional in database engineering. In 2004, she self-published Ice Cracks, which became a semi-finalist in the 2005 IPPY Awards.

Alex splits her time between Grand Junction, Colorado and Guanajuato, Mexico. When she isn’t writing, she’s helping her partner, Lee, renovate a 450 year old hacienda. She is mother to one beautiful daughter and many wonderful cats..