Welcome to the blog tour for SOUPUSS, a standalone new adult dark comedy by Merricat Mulwray. See below for information on the book, preorder links, an exclusive excerpt, and details on their giveaway. 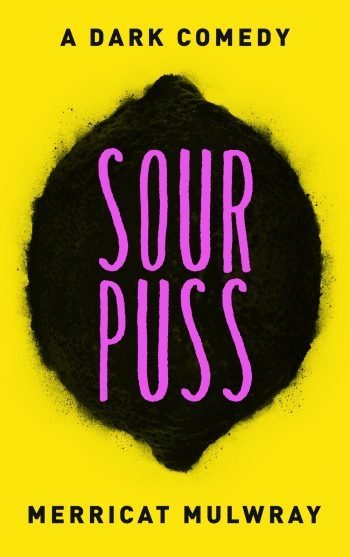 Synopsis
Sourpuss is a blistering satire of the depraved and entitled culture that pervades college campuses.

She’s sprinting through her senior year obsessed with winning a spot on the US Olympic track team. But she runs straight into a hurdle in the form of fraternity president Graham Patterson, an intern assigned to help her recover from an injury – one she blames on him.

Once Graham’s therapies begin to work, Mallory pretends to fall in love but traps herself in her own scheme and tailspins deep into his debauched world. When a scandal erupts which threatens to shatter her Olympic dreams once and for all, Mallory must finally face the dark truth she’s been running from since freshman year.

In the style of a ’90s dark comedy flick, Merricat Mulwray’s debut brings an insightful and humorous perspective to the reckless behavior college students perpetually get away with. Mallory, herself a flawed heroine, is backed by a self-serving cast of athletes, party girls, townies, and fraternity brothers so hilariously dark that the book will leave you wondering if anyone ever gets what they deserve..

Darius yelled back that he couldn’t have his girl ride the campus shuttle and turned his Jeep perpendicular to the street, driving up to the curb. Passing students and campus commuters blared their horns in protest. He jumped out of the driver’s seat and waved them all past. “Kenny, come get these crutches,” he commanded to the huge second lineman in the car. Before Mallory could protest, Darius had already picked her up.

“Is your leg properly elevated?” he asked when he set her down in the front seat. “Are you comfortable?” She shifted as the chorus of large men now squeezed into the back seat asked if she was comfortable enough.

“What did the doc say?” Darius asked.

“Nothing much, it’s fine. Just a lot jabbering on about proper care.”

“I thought you got the all clear. Callie told me you were starting physio.”

“Oh, did she? Did she also tell you that Coach Green is trying to have me rehab with some joke of a student intern?”

“Oh, they’re putting you in the Horace program? That shit is bomb.”

“Are we talking about the same thing? The interns?”

“Oh, hell yeah. I did that when I had my hamstring injury. Yo. It’s so much better. You get to work with someone on your own level. These guys are all into the latest. They do way more for you than some old-ass man telling you to stretch or just sit in the ice bath. I got back to form faster than when I’ve been out before. I have the same injury all the time. But not since I worked with my boy from Horace.”

“I hate to tell you but the program must have taken a serious shit dive since you were in it.”

“Really? It’s a hard program to get into. Who you with?”

“That condescending asshole that was bothering you during the meet. I doubt you know him personally. A total piece of work. President of some shitty frat. Not only did he insult me, but he also had the nerve to think he was actually gonna put me on a supplement program.”

“You mean Graham Patterson? He’s not the president of some frat, he’s president of the frat. Graham’s my dog! See, they always put the best with the best,” he said to the backseat.

Mallory stared at him. She wasn’t sure if he was ignoring her or just preferred to listen to himself speak.

“No, you don’t understand.”

“How?” Darius asked again with a side eye.

“It was more of an underlying attitude.” Mallory paused.

“Sounds like he was trying to get to work. Already came up with a supplement plan.”

The Jeep pulled up to her place, and Darius looked at Mallory. He was giving her the pained look every student gave to the one kid asking questions when everybody else wants to move on. “Asshole? Yo, do you guys know Patterson to be an asshole?” The consensus returned a no vote.

“Yeah, he’s not an asshole. You’ll do well to work with him. You’ll vibe with him.”

“I really prefer to just get myself together.”

“Look. You know I don’t fuck around when it comes to this shit. You’re a few months away from trials. You and I know both know that Kathy Voss just broke your fastest time.”

She’d heard the news yesterday after her interlude with Graham. The news made her so upset she’d hid in the bathroom, alternating between screaming and biting into a towel.

About the Author
Merricat Mulwray is the collaboration of two sisters. They live in Los Angeles where they hatch plans and develop schemes, sometimes these turn into novels.