Welcome to the blog tour for TWO THOUSAND YEARS, the first book in the new adult fantasy series, The Empire Saga, byM. Dalto. See below for information on the book, buy links, an exclusive excerpt, and details on her giveaway. 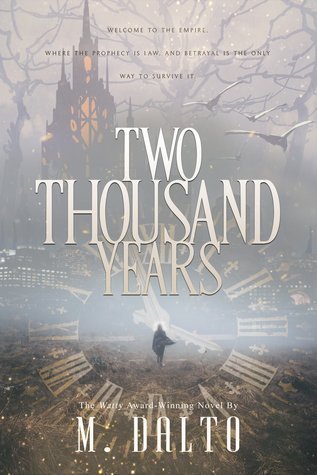 Synopsis
Two thousand years ago, the Prophecy of Fire and Light foretold the coming of the Queen Empress who would lead the Empire into a time of peace and tranquility. But instead of the coming of a prosperous world, a forbidden love for the Empress waged a war that ravaged the land, creating a chasm between the factions, raising the death toll of innocent lives until the final, bloody battle.

Centuries later, Alexandra, a twenty-two-year-old barista living in Boston, is taken to an unfamiliar realm of mystery and magic where her life is threatened by Reylor, its banished Lord Steward. She crosses paths with Treyan, the arrogant and seductive Crown Prince of the Empire, and together they discover how their lives, and their love, are so intricately intertwined by a Prophecy set in motion so many years ago.

Alex, now the predestined Queen Empress Alexstrayna, whose arrival was foretold by the Annals of the Empire, controls the fate of her new home as war rages between the Crown Prince and Lord Steward. Either choice could tear her world apart as she attempts to keep the Empire’s torrid history from repeating itself. In a realm where betrayal and revenge will be as crucial to her survival as love and honor, Alex must discover whether it is her choice – or her fate – that determines how she survives the Empire’s rising conflicts.

Excerpt #4
Her hand grasped at her breast as she tried to catch her breath. The material of her dress clung to her sweat-soaked body as she heaved for air. Wiping away tears from her cheeks, she realized it was a dream, and only a dream. Even as she could still feel the heat of his breath against her skin, and the weight of those restraints around her wrists…

It was only a dream.

But still, it felt too real, and that terrified her all the same.

Calming herself, she looked around to find herself in yet another strange room. This room was better furnished, at least from what she could tell. The mahogany bed was extremely comfortable and nearly a fortress with four posts rising to the ceiling and sheer curtains creating a canopy. The comforter was made of fine fur and filled with down and on either side of the bed were matching double-drawered bedside tables.

Finally, able to calm her heart after the jolt of waking, she flopped herself back down on the mound of pillows underneath her head and let out a breath she didn’t even know she was holding.

She needed to think.

She tried to wrap her head around all that had transpired over these last few days—at least she thought it was days. Time was starting to waver, and she felt like a stranded sailor at sea. Of course, it was hard for her to discern the time when sleep kept falling upon her time and again, and now she felt robbed of both time and information. As to what exactly was happening, however, she was still in the dark—literally and figuratively.

According to what Treyan told her, she was a prophesized Empress for a world she didn’t know existed, being hunted by his estranged twin brother for who knows whatever reason.

She shuddered at the memory.

Rolling to her side, Alex closed her eyes for a moment as she tried to collect her thoughts. She wondered if anyone in Boston was missing her yet—if Crystal had sounded an alarm after her phone call, or if she assumed Alex was merely overreacting after a night of excessive drinking. Knowing Crystal, she’d probably remain in bed all weekend nursing the hangover she liked to enjoy for days, regardless of the concern Alex’s call may have instilled.

Thinking about home made her groan and sink deeper into the blankets. She needed to get back. The comfort of the bed, and the care Treyan seemed to have for her well-being, they weren’t enough to keep her here. Whatever fantasy he may have had about who she was and what she was supposed to do was just that—nothing more than some delusion that there was an alternate world where she mattered. If she remained any longer, playing into this farce, she was bound to lose her mind, among everything else. 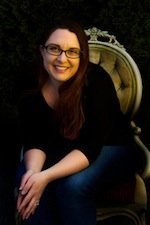 About the Author
M. Dalto is a fiction author of adventurous romantic fantasy and her debut novel, Two Thousand Years, won one of Wattpad’s Watty Awards in 2016. She continues to volunteer her time as an Ambassador, where she hopes to engage and inspire new writers. She spends her days as a full-time residential real estate paralegal, using her evenings to pursue her literary agenda. When she’s not writing, she enjoys reading fantasy novels, playing video games, and drinking coffee. She currently lives in Massachusetts with her husband, their daughter, and their corgi named Loki.