Welcome to the blog tour for YOU SAY IT FIRST, the first book in the adult contemporary romance series, Happily, Inc., by New York Times bestselling author, Susan Mallery. See below for information on the book, buy links, an exclusive excerpt, and details on her giveaway. 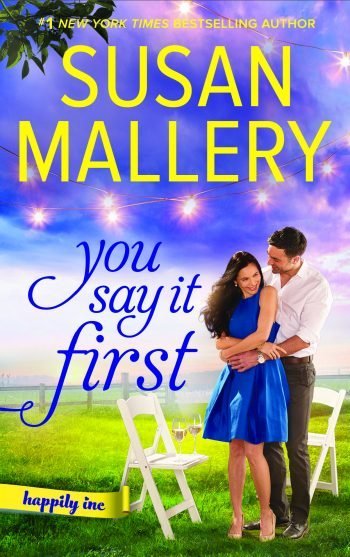 YOU SAY IT FIRST (Happily, Inc. #1) by Susan Mallery

Synopsis
The #1 New York Times bestselling author of the Fool’s Gold romances invites you to visit Happily Inc, a wedding destination founded on a fairy tale…

Sculptor Nick Mitchell grew up in a family of artists and learned from his volatile father that passion only leads to pain. As he waits on a new commission, he takes a day job as a humble carpenter at a theme wedding venue. The job has its perks–mainly the venue’s captivating owner, Pallas Saunders. Although he won’t let love consume him, for ecstasy with an expiration date, he’s all in.

Pallas adores Weddings in a Box. But if she can’t turn the floundering business around, she’ll have no choice but to cave to her domineering mother and trade taffeta for trust funds working at the family’s bank. Then when a desperate bride begs Pallas for something completely out of the box, her irresistible new hire inspires her. Nick knows she doesn’t belong behind a desk, and she knows in her heart that he’s right—where she really belongs is in his arms. Excerpt #3
Nick sanded the sliver of wood so the point was sharper, then used tweezers to carefully put it into place. This time the fit was perfect. The restoration of the panels was painstaking work, but worth it, he thought. Something this beautiful deserved to be made whole again.

He looked up and saw Pallas in the doorway. Not a surprise—this was her business and from what he could tell, she was in the office every day. However, right now something was very different and every cell in his body noticed.

Instead of her usual work uniform of jeans and T-shirt, she had on a long dress. But not just any dress. It was low-cut, with a tight, black leather corset over a white short-sleeved puffy blouse and full, black-and-white vertical strip skirt that fell to the floor.

She had curves he hadn’t noticed before—the kind of curves that got a man to thinking about touching and tasting. While he’d known that Pallas was female and someone whose company he enjoyed, he hadn’t exactly seen her that way before. That he did now was unsettling. Worse was the possibility that now there was no way to unsee her.

She held out the skirt with both hands. “I have a princess wedding with a black-and-white theme. My friend Violet wants to make these changes to the server costumes.” Her voice sounded doubtful. “We’ve used this basic style forever, but she added the corset and the overlay on the skirt.”

She spun around for him to see the back, then bent over to look at the—well, he didn’t know or care what. Not with her breasts practically spilling out. Was it him or was it hot in here?

He had to clear his throat before he could speak. “It looks good.”

“Really? Do you think it will be a distraction?”

“Probably, but is that bad?”

She released the skirt and crossed her arms under her breasts. The full curves seemed to swell toward him, which made it difficult to think about anything but walking over and pulling her close. What he would do after that wasn’t totally clear. Mostly because there were so many possibilities—there was no way to pick just one. 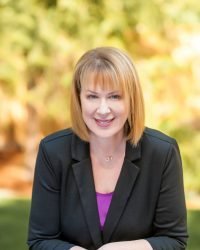 About the Author
#1 New York Times bestselling author Susan Mallery writes heartwarming and humorous novels about the relationships that define women’s lives—family, friendship, romance. She’s best known for putting nuanced characters into emotionally complex, real-life situations with twists that surprise readers to laughter. Because Susan is passionate about animal welfare, pets play a big role in her books. Beloved by millions of readers worldwide, her books have been translated into 28 languages.

Susan lives in Washington state with her husband, two ragdoll cats, and a small poodle with delusions of grandeur.