Welcome to the blog tour for TIFFANY BLUES, a stand-alone adult historical romantic mystery, by New York Times bestselling author, M.J. Rose. See below for information on the book, buy links, and and exclusive excerpt. 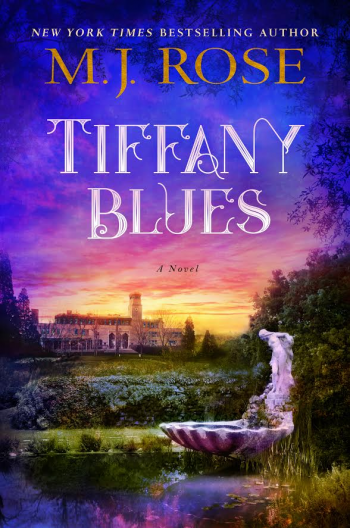 Synopsis
New York, 1924. Twenty‑four‑year‑old Jenny Bell is one of a dozen burgeoning artists invited to Louis Comfort Tiffany’s prestigious artists’ colony. Gifted and determined, Jenny vows to avoid distractions and romantic entanglements and take full advantage of the many wonders to be found at Laurelton Hall.

But Jenny’s past has followed her to Long Island. Images of her beloved mother, her hard-hearted stepfather, waterfalls, and murder, and the dank hallways of Canada’s notorious Andrew Mercer Reformatory for Women overwhelm Jenny’s thoughts, even as she is inextricably drawn to Oliver, Tiffany’s charismatic grandson.

As the summer shimmers on, and the competition between the artists grows fierce as they vie for a spot at Tiffany’s New York gallery, a series of suspicious and disturbing occurrences suggest someone knows enough about Jenny’s childhood trauma to expose her.

Supported by her closest friend Minx Deering, a seemingly carefree socialite yet dedicated sculptor, and Oliver, Jenny pushes her demons aside. Between stolen kisses and stolen jewels, the champagne flows and the jazz plays on until one moonless night when Jenny’s past and present are thrown together in a desperate moment, that will threaten her promising future, her love, her friendships, and her very life. 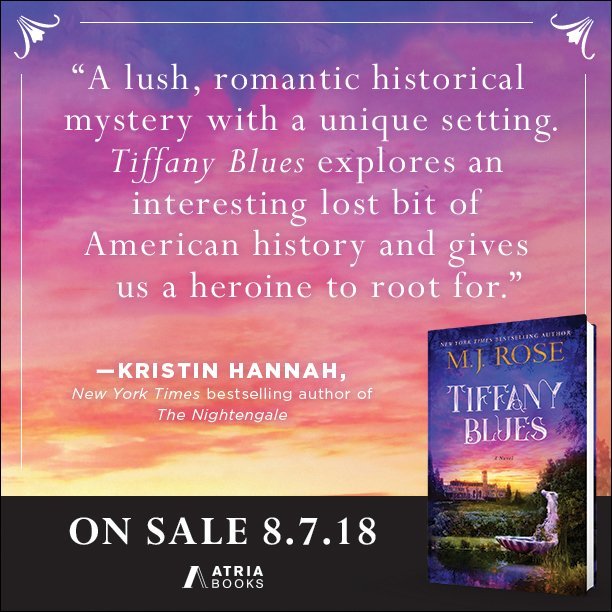 Excerpt #4
“May I see?” A man’s voice came from behind me. In its timbre, I saw a flash of forest green. The color of holly in the summer when its leaves are at their glossy best.

He looked to be about my age, not striking except for the excitement in his warm brown eyes as he glanced from me back to my drawing.

And then he tipped my pad toward himself.

“No, no, don’t. let me look. These are so good. You’ve captured so much more of him in one drawing than I can with this,” the man said, pointing to the camera slung around his neck.

Before I could stop him again, he took the sketch pad from my hand and was rifling through my series of drawings.

“You have absolutely no right—” I tried to grab the sketch pad back, but he held tight.

“Please say you’ll come to the office with me. I want to show these to my boss. I’m sure he’d want to buy at least one from you.”

“The office? Your boss?”

“I work at the New York Herald Tribune.”

My heartbeat quickened. “No, no,” I said. “I have to go. I have class. And you are being amazingly rude!” I held out my hand for the sketch pad.

He returned it with a sheepish grin. “I’m sorry,” he said.

I slipped the pad into my satchel and prepared to go.

“But I’m certain the paper would—”

I shook my head. “I’m really late and not at all interested.” I walked away, not waiting to hear the rest of what he had to say.

My last run-in with newspapers and reporters had been almost nine years earlier. Enough time to give me perspective but not enough to take away the sting or to erase the memories. No matter how kind this man’s eyes looked, he was obviously a reporter, and I knew from experience that reporters could not be trusted. The press was out for one thing only: the story that would give them a headline to sell copies.

I hurried westward, half walking, half running, crossing Sixth and then Seventh Avenue, and finally coming to a stop at number 215 West Fifty-seventh Street. I took the steps two at a time, pulled open the door, and took a deep breath.

I was safe3 in the hallowed halls of the art school that had been training men and women form the last fifty years. The combined scent of oil paints, turpentine, primer, clay, wood chips, marble dust, and cigarettes was an aroma like no other. It could not be reproduced in even the finest perfumery.

I walked up two flights to the classroom, laid out my supplies, and banished all thoughts of the scene on the street and the rude reporter. Instead, I threw myself into trying to capture the pose of the current female model on the dais. 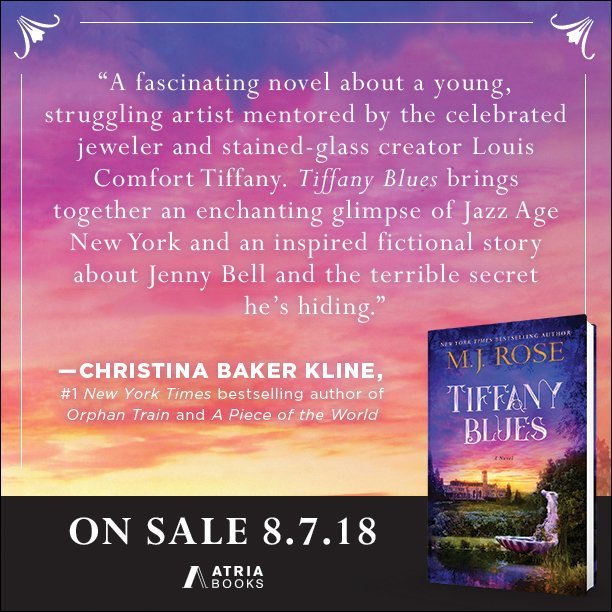 “[M.J. Rose] transports the reader into the past better than a time machine could accomplish” (The Associated Press).

About the Author
New York Times Bestseller, M.J. Rose grew up in New York City mostly in the labyrinthine galleries of the Metropolitan Museum, the dark tunnels and lush gardens of Central Park and reading her mother’s favorite books before she was allowed. She believes mystery and magic are all around us but we are too often too busy to notice… books that exaggerate mystery and magic draw attention to it and remind us to look for it and revel in it.

Her most recent novel TIFFANY BLUES (Atria/S&S) was chosen as an Indie Next Pick and takes place during the Jazz age at Louis Comfort Tiffany’s Long Island mansion/ art colony.

Rose’s work has appeared in many magazines including Oprah Magazine and she has been featured in the New York Times, Newsweek, WSJ, Time, USA Today and on the Today Show, and NPR radio. Rose graduated from Syracuse University, spent the ’80s in advertising, has a commercial in the Museum of Modern Art in NYC and since 2005 has run the first marketing company for authors – Authorbuzz.com

The television series PAST LIFE, was based on Rose’s novels in the Reincarnationist series. She is one of the founding board members of International Thriller Writers.