Welcome to the blog tour for STRICKEN, a stand-alone middle grade/young adult dystopian adventure with a scifi twist, by C.K. Kelly Martin. See below for information the book, buy links, an exclusive guest post by the author, and details on her giveaway. 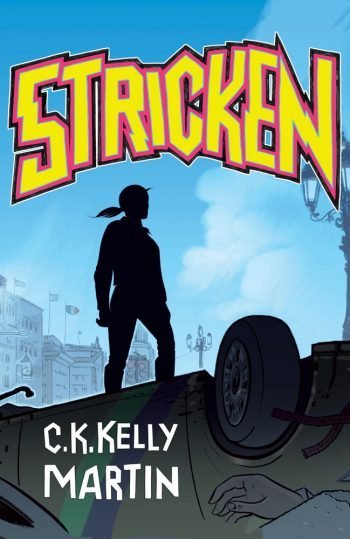 Synopsis
Naomi doesn’t expect anything unusual from her annual family trip to visit her grandparents in Ireland. What she expects is to celebrate her thirteenth birthday, hang out with her friends Ciara and Shehan, and deal with her gran’s Alzheimer’s. What she finds is a country hit by an unexpected virus that rapidly infects the majority of the Irish population over the age of twenty-one.

Amnestic-Delirium Syndrome (ADS) starts off with memory loss, but the virus soon turns its victims aggravated, blank, or violent. Naomi and her friends must survive on their own, without lucid adults, cut off from the rest of the world, until a cure is found.

But there are whispers that ADS is not terrestrial, and soon Naomi and her friends learn the frightening truth: we are not alone.

Guest Post – Cover Love
Seeing a new book cover for the first time is always exciting for an author– it’s a visual representation of your work that will (hopefully!) have an immediate impact on whoever sees it.  Stricken is my first middle grade book and my first book cover that wasn’t a photograph. Those things alone made me giddy. An original cover illustration!

The first I saw of the Stricken cover art was a black and white sketch that I instantly fell head over heels in love with. Canadian visual artist Nick Craine adapted Bruce McDonald’s, Dance Me Outside and Hard Core Logo into graphic novels and his illustrations have appeared in The Atlantic Monthly, The New York Times, The Washington Post, and The New Republic.

To me it’s no small thing that Nick Craine also designed the best book cover I’ve ever had. I’m in absolute awe of main character Naomi’s defiant posture atop an overturned car. Seeing Dublin’s main thoroughfare, O’Connell Street (a place central to the Easter Rising of 1916 and the Irish Civil War of 1922) pictured behind her gives me a thrill every time I see Stricken. If you ever go to Dublin, there’s no way you’ll visit the place without seeing O’Connell Street and O’Connell Bridge, which spans the River Liffey. The Stricken cover vividly portrays more than a familiar city street though; it shows a place in trouble, a place where life has been turned upside down.  It makes me want to snatch up the book and find out what happens within the pages, even though I’ve already read it. It’s a cover that sets up delicious expectations, which I dearly hope I meet.

I was twenty-one the first time I landed in Dublin, but there was something about it that nearly instantly felt like home. That makes this book and its fabulous cover very special to me.   I can’t thank Nick Craine enough. 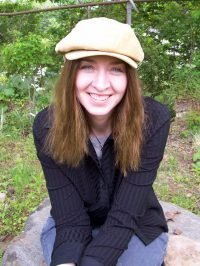 About the Author
Long before I was an author I was a fan of books about Winnie the Pooh, Babar, Madeline, Anne Shirley and anything by Judy Blume. Throughout high school my favourite class was English. No surprise, then, that most of my time spent at York University in Toronto was as an English major—not the traditional way to graduate with a B.A. (Hons) in film studies but a fine way to get a general arts education.

After getting my film studies degree I headed for Dublin, Ireland and spent the majority of the nineties there in forgettable jobs meeting unforgettable people and enjoying the buzz. I always believed I’d get around to writing in earnest eventually, and I began writing my first novel in a flat in Dublin and finished it in a Toronto suburb. By then I’d discovered that fiction about young people felt the freshest and most exciting to me. You have most of your life to be an adult but you only grow up once.

Currently residing near Toronto with my Dub husband, I’m an aunt to twenty-one nieces and nephews, and a great-aunt to two great-nephews. I became an Irish citizen in 2001 and continue to visit Dublin as often as I can while working on novels about young people.

My first young adult book, I Know It’s Over, came out with Random House in September 2008, and was followed by One Lonely Degree, The Lighter Side of Life and Death, My Beating Teenage Heart and sci-fi thriller Yesterday. I released Yesterday’s sequel, Tomorrow, in 2013 and put out my first adult novel, Come See About Me, as an ebook in June 2012. My most recent contemporary YA books, The Sweetest Thing You Can Sing and Delicate, were published by Cormorant Books’ Dancing Cat Books imprint in 2014 and 2015.