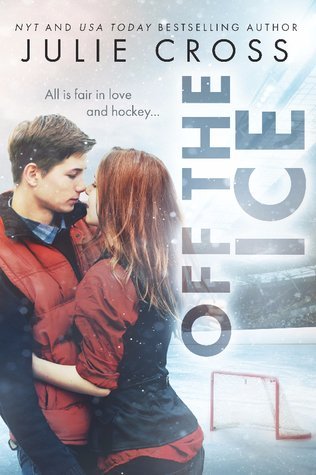 OFF THE ICE (Juniper Falls #1) by Julie Cross

Synopsis
The NY Times and USA TODAY bestselling author of Whatever Life Throws at You kicks off a brand-new series perfect for fans of Miranda Kennealy and Abbi Glines.

All is fair in love and hockey…

Claire O’Connor is back in Juniper Falls, but that doesn’t mean she wants to be. One semester off, that’s what she promised herself. Just long enough to take care of her father and keep the family business—a hockey bar beside the ice rink—afloat. After that, she’s getting the hell out. Again.

Enter Tate Tanley. What happened between them the night before she left town resurfaces the second they lay eyes on each other. But the guy she remembers has been replaced by a total hottie. When Tate is unexpectedly called in to take over for the hockey team’s star goalie, suddenly he’s in the spotlight and on his way to becoming just another egotistical varsity hockey player. And Claire’s sworn off Juniper Falls hockey players for good.

It’s the absolute worst time to fall in love.

For Tate and Claire, hockey isn’t just a game. And they both might not survive a body check to the heart..

My Review
Tate Tanley is the starting goalie on his high school hockey team in Minnesota, where hockey is a religion. Claire O’Connor is back in town from Northwestern University after her father is diagnosed with an inoperable brain tumor. When she sees Tate for the first time in over a year, she realizes her best friend’s little brother isn’t so little anymore. Tate has had a massive crush on Claire most of his life, but he’s always been the kid brother. Not anymore. These two dance around attraction mixed-up with a lifelong friendship set against Claire’s dreams for her future and Tate’s goals on and off the ice. It’s a super sweet romance with deeply developed characters.

Plot
The romance is the primary plot, but it’s missing that teen angst that I’ve grown to love in Julie Cross’s stories. What it lacks in that department, it more than makes up for in the supporting plots. Tate’s hockey career, college recruiting, and his relationship with his town-legend father. Claire has her issues with her dad’s health and what she wants to do with her college career, saving her family’s business, and more. Told from dual-points-of-view, there’s a lot of territory covered.

The Characters
No one does characters like Julie Cross. Tate is complex, fascinating, and completely loveable. The author takes usdeep inside his head and I never doubt it’s a guy’s point of view. Unfortunately, Claire fell a little flat for me. I struggled to like her her. I felt for her, I mean, who wouldn’t with everything she was dealing with, but I just didn’t love her the way I do so many of Ms. Cross’s characters (Ellie from Chasing Truth, for example). This was a pretty character-heavy story and I had a tough time keeping some of the hockey players straight in my head, but Tate’s and Claire’s families came across in vivid color.

World Building
There’s a lot of hockey here, something I didn’t know that much about before reading Off the Ice. I feel as if I understand it better now. To me, it’s always been “soccer played on ice with sticks.” And maybe there’s a little bit of that to it still, but it sounds a lot more interesting. I may even try to take in a San Diego Gulls game and watch it live.

What Didn’t Work for Me
1. The romance. It wasn’t that it didn’t work so much as there wasn’t ever a doubt they might not end up together. The romance lacked much in the way of overt conflict. It’s almost as if these two teens were wise beyond their years when it came to relationships.

Top Five Things I Enjoyed About OFF THE ICE
1. The realness. I love that nothing was glossed over. The emotions, and feelings, and events were all written with such intensity, they grabbed me and pulled me into the story.

2. Tate. He’s so deeply drawn, it’s hard not to get such a sense of who he is and I love him all the more for his flaws.

3. Hockey. And not just the games. The practice and politics surrounding high school hockey was fascinating.

4. Cancer. No, I don’t like cancer, but I love that the author didn’t gloss over the ugly effects of this heinous disease.

5. Roger. Tate’s stepfather grows more important in Tate’s life throughout the story, so we catch glimpses of him early on, that grow more frequent as the book progresses until we get to see him for who he really is. Hint: he’s one of the really good guys.

Bottom Line
OFF THE ICE is a sweet small-town high school romance. A Friday Night Lights for the hockey crowd.

About the Author
Julie Cross is a NYT and USA Today bestselling author of New Adult and Young Adult fiction, including the Tempest series, a young adult science fiction trilogy which includes Tempest, Vortex, Timestorm (St. Martin’s Press). She’s also the author of Letters to Nowhere series, Whatever Life Throws at You, Third Degree, Halfway Perfect, and many more to come!

Julie lives in Central Illinois with her husband and three children. She’s a former gymnast, longtime gymnastics fan, coach, and former Gymnastics Program Director with the YMCA. She’s a lover of books, devouring several novels a week, especially in the young adult and new adult genres.

Outside of her reading and writing credibility’s, Julie Cross is a committed–but not talented–long distance runner, creator of imaginary beach vacations, Midwest bipolar weather survivor, expired CPR certification card holder, as well as a ponytail and gym shoe addict.