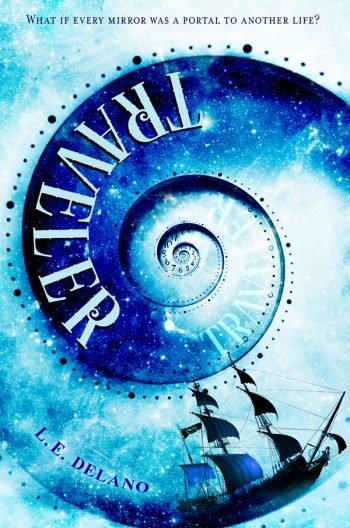 Synopsis
A teen writer discovers that every mirror is a portal into an alternate version of her life in this romantic YA fantasy by author L.E. DeLano.

Jessa has spent her life dreaming of other worlds and writing down stories more interesting than her own, until the day her favorite character, Finn, suddenly shows up and invites her out for coffee. After the requisite nervous breakdown, Jessa learns that she and Finn are Travelers, born with the ability to slide through reflections and dreams into alternate realities. But it’s not all teacakes, pirates and fantasy lifestyles…Jessa is dying over and over again, in every reality, and Finn is determined that this time, he’s going to stop it… this Jessa is going to live.

My Review
This was a fresh take on the urban fantasy genre. Jessa discovers she’s a Traveler, someone who can move between parallel universes. The purpose of the Traveler is to keep all the universes orderly, fixing things that can become catastrophic if left unchecked. Together with fellow Traveler, Finn, Jessa reluctantly accepts her fate until she discovers someone is trying to kill her, one universe at a time.The tale is magical with incredible world-building and complex characters. Because each character is slightly different in each universe, the author crafted a wonderfully deep cast. As Finn and Jessa race through portals, they develop a deep bond, but Jessa’s best friend, Ben, has strong feelings for her, setting up one of the most unique love triangles I’ve come across. The teen angst is palpable without being overly dramatic.

Plot
The plot centers around Finn and Jessa’s search for whoever is trying to kill her. There’s a solid mystery component to it with some exciting moments. The romance almost takes a back seat, though. I was hoping for more romance earlier in the book. It takes a good three-quarters of the story to fully develop. Even so, it is well done and I feel as conflicted as Jessa does about the two boys in her life.

Characters
While this is definitely a plot-driven story, the character development really shines. I loved seeing all the slight ripples in personality from Jessa’s viewpoint as she traveled. It’s clear the author spent a lot of time getting to know her characters.

What Didn’t Work for Me
1. Pacing. The story took too long to really get ramped up. At least for me. I had to plod through the first third waiting for it to grab me, and some sections I ended up skimming.

2. World Building. Don’t get me wrong, I love the world the author created, but I found some of the rules confusing and hard to follow.

What I Enjoyed About TRAVELER
1. Ben. I liked him immediately and I love how much he cares for Jessa.

2. Danny. Jessa’s brother takes different shape throughout the story as she travels to different dimensions, but her love for Danny, and seeing him the way he is in other realities and the way it affected her, was one of my favorite aspects of the story.

3. The ending. Even though it took awhile to build, once the story reached its pinnacle, it was a non-stop ride to the finish.

4. Alternate Universes. Or AUs as my teen likes to call them. This is almost as fascinating as time travel.

5. Finn. He’s such a tormented, complex hero. Strong, resilient, and so easy to love.

6. The cover. Seriously, this is absolutely gorgeous!! I’d totally frame it and hang it on my wall!

Bottom Line
TRAVELER is everything I hoped it would be, a fascinating plot with plenty of twists. 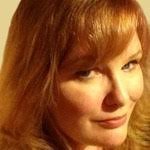 About the Author
L.E. DeLano is a YA novelist rep’d by Barry Goldblatt Literary agency, author of the upcoming “Traveler” (Swoon Reads/MacMillan 2017) and lifelong writer. Her work has been featured on various online outlets and she lives in Pennsylvania with two very adventurous kids and two very ridiculous cats. In her spare time, she writes (of course) and binge-watches way too much Netflix.