Book Blitz – Excerpt + Giveaway – EXTINCTION OF ALL CHILDREN (Extinction of All Children) by L.J. Epps

Welcome to the book blitz for EXTINCTION OF ALL CHILDREN, the first book in the young adult dystopian series, Extinction of All Children, by L.J. Epps. See below for information on the book and series, buy links, an exclusive excerpt, and details on her giveaway. 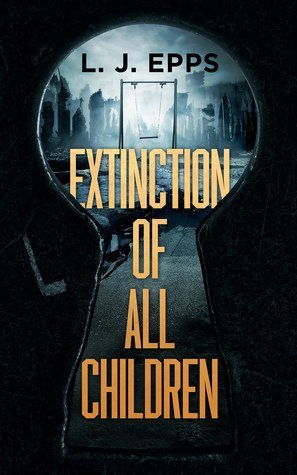 EXTINCTION OF ALL CHILDREN (Extinction of All Children #1) by L.J. Epps

Synopsis
A young adult, fantasy novel about a teenager who is the last eighteen-year-old in her territory. There will never be another child; every baby born after her has been taken away. Everyone wonders why she survived.

Emma Whisperer was born in 2080, in the small futuristic world of Craigluy. President Esther, in charge for the last twenty-two years, has divided their world into three territories, separated by classes—the rich, the working class, and the poor—because she believes the poor should not mingle with the others. And, the poor are no longer allowed to have children, since they do not have the means to take care of them.

Any babies born, accidentally or willfully, are killed. Emma is the last eighteen-year-old in her territory; every baby born after her has died. Somehow, she survived this fate.

During the president’s Monday night speech, she announces a party will be held to honor the last child in the territory, Emma Whisperer. Emma must read a speech, expressing how happy she is to be the last eighteen-year-old.

Emma doesn’t like the rules; she doesn’t believe in them. So, she feels she must rebel against them. Her family doesn’t agree with her rebellion, since they are hiding a big secret.

If this secret gets out, it will be disastrous, and deadly, for her family.

During Emma’s journey, she meets—and becomes friends with—Eric. He is one of the guards for the president. She also befriends Samuel, another guard for the president, who is summoned to watch over her. As Emma meets new people, she doesn’t know who she can trust. Yet, she finds herself falling for a guy, something which has never happened before.

After doing what she feels is right, Emma finds herself in imminent danger.

In the end, she must make one gut-wrenching decision, a decision that may be disastrous for them all.

“Fans of dystopian fantasy will devour this book. L. J. Epps writes a story that, while dealing with heavy subject matter, is still a light, enjoyable read. This dystopian fantasy novel ignites the imagination, and is a must read for fans of The Hunger Games and the Divergent Trilogy.”
—Kristina Gemmell, Beta Reader

Excerpt #1
I take in a deep breath before walking into my family’s house. Our brick home is around a thousand square feet. My father says since it is on the smaller side, it takes a lot less money to heat and cool. The back of the house is like a forest, and the front of the house is on a dirt road with lots of gravel. As soon as I reach the front door, I notice the stench of beans lingering in the air, making the room smell as if a skunk has run through it.

“You’re late,” my brother, Theodore, says. “You know dinner is at six.”

He shoves my arm. He has on dark clothing that mirrors my own.

“Whatever,” I say, rolling my eyes. Another stupid rule. “It’s almost eight.” I glance at the brown clock on the wall. “Shouldn’t you be done?”

“We had to stop what we were doing and watch the box,” he says, then he gulps down a bottle of water.

His Adam’s apple moves in and out, while the bottle crinkles in his hand.

“Yes, the announcements came early.” My father rises from the dining room table. “I’m sure you heard them.”

He walks to the living room where I am.

“Where were you?” Mother asks. “We were worried.”

“I know, and I’m sorry, but I’m fine. I watched the announcements from the supply store.”

I know they worry about me, but I also know they won’t ask how I ended up at the supply store, or ask why my jeans are dirty. There is a more pressing question they want to ask.

“Did you see her?” my mother asks.

Now that is what they really care about.

“What does that mean?” my mother asks with a frown. “You’re not giving me any details.”

I sigh. It was the same questions every time I go to the wooded area. Another sigh follows because my heart saddens, seeing how old my mother looks. She is only in her fifties, but I can see the gray strands in her dark hair instantly becoming grayer every time we discuss this. Even when I bring back food, my mother is too tense to eat. Day by day she is growing thinner.

“Emma, answer your mother,” my father says, looking at me with slanted eyes.

“If you want to know how she is, why don’t you go and see her yourself?” I snap back. I’m tired of the theatrics. But it was a stupid question. I know why they can’t go. They aren’t strong enough or fast enough.

“You know your mother moves too slowly. She would never make it there,” my father says, echoing the very words in my head.

Read the Rest of the Series

About the Author
L.J. Epps is a lover of all things related to books: fiction and nonfiction novels, as well as biographies and autobiographies. She has also been known to sit and read comic books from cover to cover, several times over.

Over the last few years, L.J. has written several manuscripts; her mission is to publish all of them. She enjoys writing fiction in several genres, including contemporary romance and women’s fiction, as well as young adult dystopian, science fiction and fantasy. She loves to write because it immerses her into another world that is not her own.