Welcome to the book blitz for GAVIN, the first book in the adult thriller series, Gavin Nolan’s Biography, by Russell. See below for information on the book, buy links, an exclusive excerpt, and details on his giveaway.

Synopsis
The Chicago summer is heating up…

In a luxurious hotel off Michigan Avenue, Detective Gavin Nolan arrives on a grisly scene. Two men have been brutally murdered, and one of the victims has a familiar face. The twisted display is like nothing Gavin has ever seen, but it’s the message scrawled in blood on the bathroom mirror that leaves him reeling: Gavin, you could have saved me.

Other men have been viciously slain as well over the last few weeks. As he dives further into the victims’ lives, Gavin and his partner, Derrick, discover that each of the men have a common thread—one that Gavin shares. It’s a reality he has suppressed for years.

On top of Gavin’s personal chaos, the killer is displaying the bodies in a series of speciﬁc designs to depict a long ago memory. Recognizing the pattern, Gavin soon is forced to recall the dark event. In order to catch the killer, Gavin must reconcile his past.

Before he becomes the ﬁnal victim himself.

GAVIN is a sexual thriller that will leave you breathless…

Excerpt #2
Gavin’s favorite band, Slipknot, pulsated in his earbuds. The steely guitar riffs, the raw guttural singing, and the rhythmic drum pounding created a resurgence of raw energy and increased the length and quickness of his pace. This particular album was Gray’s second-to-last recording with the band before his death. Appreciating the posthumous honor, Gavin enjoyed the inspirational bassist’s riffs even more as he ran along Lake Shore Drive.

The tingling in his left leg meant that he’d pushed himself harder. A glistening layer of sweat coated his naked torso, and he felt the sun’s radiant heat on his skin. Even though the music was deafening, he could still hear his raspy breath.

Today was the first real day of summer.

Being an avid runner, he was not as neurotic as some of the others. He did not wear the expensive shorts, the breathable shirts, the specialized hats, or any of the merchandising. More so, he no longer wore a watch. For a long time, he did wear one, and it helped with his pacing here and there. Three years ago, he had forgotten it for his first half-marathon. The freedom of not looking down at the time made him enjoy the race more. After viewing his results, he discovered that his pace was actually better. Now the watch was on the kitchen counter, still keeping time.

From that point on, he just ran to enjoy the exercise. In fact, he liked it simple. His beat-up White Sox hat, a cheap MP3 player with his tunes, a water bottle clutched in his left hand, a decent pair of running shoes with great support, and a pair of shorts were his choice for a warm day. Yes, he did run when it was cold, but the distance was significantly shorter. To him, running in the summer was much simpler.

He caught glimpses of women turning their heads as he passed them. Perhaps his half-naked body made them take a good second look. Courteously, he received the runner’s nod from men, probably eyeing him up as well. Honestly, he did not care. Before he would have felt slightly self-conscious of their stares, but today, especially today, on this hot summer day in the afternoon, he absorbed their looks. The faded, slightly torn baseball cap was tight on his head, and his eyes darted side to side, looking at the views.

Ahead, the glorious tall buildings of Chicago poked jaggedly toward the sky like shimmering steel and glass stalagmites rising toward the brilliant azure sky above. To the left, he saw the beach filling up with people, kids, and dogs playing in the rough, choppy lake water. The heat was intense. He could have just run over and jumped into the water, but instead, he ran toward the pedestrian bridge over Lake Shore Drive. Halfway through the overpass, looking below the steel fence, he saw that the Friday afternoon traffic already swelled up all eight lanes, and the faint sound of blasting horns could be heard over the music. No matter, he was heading for his apartment building on Wells, which was less than a mile away.

He was reaching the twelve-mile point.

Running helped Gavin purge his thoughts of the day, find solutions to problems, and even work on cases. The more stressed he had been at work, or in life, the longer he would run.

The concrete was his therapy session. 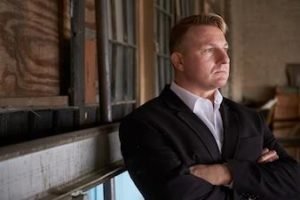 About the Author
For nearly two decades, Russell was an executive chef in the restaurant industry, in which he created succulent entrees and managed various types of kitchen operations. In the last seven years, he began to teach future culinarians how to achieve their professional goals in hands-on classroom and lecture settings. With his recent graduate work in the field of sociology, his interests center on organizational behaviorism, social theory, and food insecurity.

Russell has been writing for the majority of his life. Last year, he published a second edition of his freshman novel, The Tale of Old Man Fischer. Slipping into alternative universes allows Russell to enjoy the process of creativity from the novel’s conception to its final draft. Most importantly, inspiration is a continuous piece of his work and results from the world around him. Currently, he lives in Up State New York with his wife, two children, and several cats..