Welcome to the book blitz for GEARS OF FATE, the first book in the young adult fantasy/mythology series, Forgotten Gods, by Wilbert Stanton. See below for information on the book, buy links, an exclusive excerpt, and details on his giveaway. 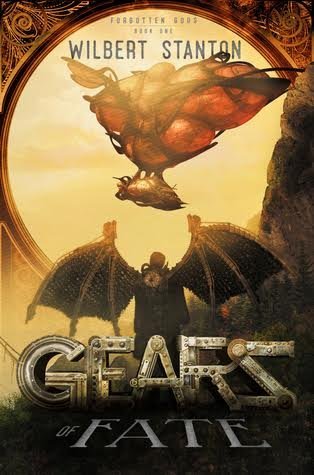 Synopsis
Centuries have passed since the Fey conquered Earth, forcing mankind and gods alike to flee to the sky city Olympus. Forgotten gods walk amongst man, lost and powerless. Little do they suspect a second Fey war looms, and an unlikely duo will set in motion the gears of fate.

Zak Walker is a fringe rat living in the slums who would do anything to protect his sister, Alice. His neglectful father threatens to consign him to a life away from home on an airship, but he yearns for his life to mean something more than drudgery.

Princess Seneca Rose is the last surviving member of the Seelie royals. They tried to establish peace with mankind, but fell to the forces of Queen Mob and the Unseelie Court. Fleeing for her life, Seneca arrives on Olympus in hopes of uniting the forgotten gods against the oncoming Fey.

Zak couldn’t care less about the fate of Olympus, until faeries kidnap Alice. He doesn’t believe Seneca’s stories of faeries or gods, but soon has no choice but to accept their lives are intertwined. All his life, he’s dreamed of something more. If he cannot face the dangers that await down on Earth, the gods, mankind, and his sister Alice are all doomed..

Excerpt – Prologue
Chaos filled the halls of Olympus. Bad enough he had to entertain such undignified company as the one eyed Norse God, but Zeus couldn’t stand listening to everyone squabble. As king of the Olympian Gods, he’d fought countless wars. It would seem he’d been fighting from the moment his mother, Rhea, spat him out. Chronos, king of the Titan Gods, his father, would have killed him at birth had his mother not been clever enough to save him. After spending his life in hiding, preparing, and learning all Rhea had to teach, Zeus conquered his father’s kingdom, destroyed Chronos and his army, and banished those who survived to Tartarus where they would rot for eternity. Except Atlas―he suffered a special kind of punishment. Zeus’ cleverness when it came to concocting punishments always made him smile.

Zeus sat upon his ivory throne, towering over all the other Olympians and his visiting Norse cousin. He couldn’t even tell who argued with whom anymore. Nor did he care. The boredom of it all was enough to put him to sleep. His eyes sparkled with wild fire, a penetrating gaze that took on the visitor with contempt.

His Aegis sat ready for war at his side. The Titan lords forged the shield in lightning and hellfire, creating a thing of immense beauty, and bestowed it with the secrets of godhood. He may have been able to wield lightning with the flick of his wrist, but the Aegis held his true power and remained a mystery to all. Yet there he sat, listening to his great halls echo with the voices of uncertainty.

Odin begged an alliance. What a ridiculous idea. How could Odin expect Zeus and his royal blood to cower in fear over some unknown enemy? Zeus feared no man or beast, and Odin wanting help to fend off this invading army only proved him too weak a god to be called cousin. To make matters worse, the other Olympians were starting to believe Odin’s nonsense.

This, Zeus could not allow.

He focused on his son, the sensible one.

“Father, we should hear him out,” Apollo said. His golden armor gleamed with magic light. Apollo the great general, smart and cunning, with his twin sister Artemis at his side, could face any danger. So why would Apollo choose to humor Odin? “We know nothing of this Fey threat. Perhaps it would be wise to at least take heed of his warning.”

Hera sighed and crossed her arms. While Zeus may have feared no man or beast, Hera was a different matter. His wife was beautiful in all regards, but she had the temper and jealously to match even his pride. “Really, child? These barbarians walk into Olympus spouting tales of fancy, and you shiver in your boots. How is it you lead our armies and not Ares?”

“I’ve been asking you that for an eternity now!” Ares slammed his mighty fist on the table before him, knocking over a goblet of ambrosia. “Honestly, I can rarely tell which one is the bigger girl, him or his sister—”

The petite Artemis nearly jumped over the table had Apollo not held her back. “How about I rip your eyes out, since they seem to be of no use to you?”

Ares waved her off with a laugh. “As I was saying. I could handle this threat on my own.”

Odin rubbed his calloused hand over his one good eye. He seemed old and dusty, a wanderer who had travelled the world looking for something he could not find, his hair graying like the fading life of an abandoned cobweb. Unlike Zeus whose old features made him look strong and dignified, he looked worn and weary. “Zeus, you sit there in silence while your children bicker. Can you not look me in the eyes?”

Zeus could barely look at the gathering without shaking his head “When you’ve lived as long as I have, when you’ve fought as many wars, loved, and hated as I, you will understand. I do not fear death because death knows its place where I’m concerned. These invaders you speak of have yet to witness the might of Zeus, and I will not be introduced as someone who cannot stand on his own. Let this threat come, let them fall before me and beg to kiss at my feet.”

Before Zeus could rage over his cousin’s insult, a shift in the air stayed his temper. A rush of wind, a blur of motion, warned him of his messenger’s approach. Hermes almost seemed to flicker into existence. He knelt with his head held low. The boy always showed the proper respect in front of an audience, usually to mask something of a mischievous nature.

“Grandfather, you have a visitor.” Hermes looked up upon the king with fear-filled eyes. “I would not turn her away.”

“Can’t you see I’m at council?” Zeus clenched his fists and seethed. The clouds darkened behind him and lightning ripped across the sky.

Hermes disappeared only to reappear halfway across the court a safe distance away from Zeus. “I understand that grandfather… however, when I said I would not turn her away, I meant… I feared turning her away. Her eyes nearly froze my heart with fear. There is something not right about this woman; she is not quite man nor god.”

“Odin, I swear your foolish wives’ tales have turned all my Olympians into cowards!”

The courtroom doors burst open. A cold wind followed and a sense of dread permeated the air. A woman came forward, walking with a confidence that bordered between pride and insanity. Her long sinewy arms firmly crossed before a frail body cloaked in leather, leaves, and feathers. Her pale face bore cracks like a centuries-old porcelain doll, upon which sat a cancerous smile that dripped with venom. She came into the court alone and yet had the presence of someone with an army at her side.

“So this is where the children of mighty Chronos hide as my army even now takes back the land.” She tapped a long spider like finger at her chin. “Packaged up all nice in one place. If I weren’t of a mind for war, I could end this all right now.”

Zeus leaned forward, curiosity sparking in his bored eyes. “Who are you to barge into my court?”

She slowly licked her lips, delighted in the desire she saw in his eyes. “I am Queen Mob.”

“I know of no Queen Mob, and for what nation do you rule?”

She looked around at the others with a mild curiosity. Almost as if a second thought, she muttered, “Earth.”

With a casual grace, Queen Mob picked up a goblet from the table and drank deeply. The Gods watched dumbfounded, shocked by the creature’s brazen nature. “I do.”

To Odin, Zeus said, “This is the Fey threat you spoke of?”

Odin inched away from the presence of Queen Mob. “Aye.”

“Well then.” Zeus stood and stretched his arms. “You hold no claim here, witch. It was a grave miscalculation on your part coming here. I shall end this—”

“The Earth has grown tired of the rule of man. The blood of Atlas runs deep through her veins. His blood has given her enlightenment. The blood you call ambrosia and drink with no regard to its power. Did you know she is alive? This land you so callously abuse. She begs for a savior, someone to set right the wrongs of men and gods.”

“What dare you speak of Atlas, the Titan I banished into the depths of Earth for his betrayal?”

“Where he bled and awoken the planet.”

“What affronts me is how both you and mankind abuse and mistreat her. She gave you life and cared for you as a mother should, even when she is rewarded with nothing but abuse. You gods and man take from her with no thought of her well-being. You are a cancer upon this land that if left unchecked will eventually bring about her last breath. The Fey were born in her aid. We will cure her of this disease and she will flourish once more.”

Zeus sat back on his throne. “Apollo, dispatch this menace.”

Apollo stood; he unlike his father cautiously sized up Queen Mob. He drew a glimmering gold blade and approached. “We have no quarrel with your kind. Know that you brought this upon yourself.”

Even as he stepped forward, Mob couldn’t be bothered to pay him any attention. Instead, she looked around the court, inspecting every inch. “This castle may be fit for Oberon, but I have no desire to reside in something so… bright.” She passingly waved a hand at Apollo and he fell to his knees. His sword clattered to the ground next to him. His eye bulged and his golden skin turned red.

Artemis didn’t miss a beat, her bow and arrow drawn and trained on Mob. “What are you doing to my brother?”

“Oh, you might have made a perfect mate for Puck. But it wouldn’t do letting anyone think they can draw a weapon on me, now would it?” Mob waved another hand and Artemis’ head turned violently with a crack and her body crashed out the window as if an invisible hand swatted her away. Apollo fell flat on the ground. His last breath escaped his perfect lips in a whimper.

To Zeus, Mob said, “I hope to see you on the fields of battle? I could finish it here. But the Earth deserves to be bathed in the blood of man and God.”

Mob disappeared in a flash of smoke and leaves. Zeus breathed heavy with anger while the others screamed and argued.

For the first time he could recall, Zeus felt fear. 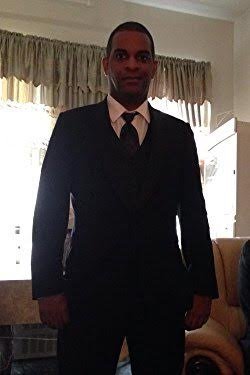 About the Author
Wilbert Stanton was born and raised in New York City. From an early age, Wilbert decided he would either write books or take over the world; everything else was just a precursor to his end game.

Along the way, he has studied Psychology, English, and Computer Science. He’s held jobs in a wide range of fields and met people from all walks of life. Wilbert is constantly learning and growing as a person, in order to solidify his dreams.

In the end, world domination was a bit tedious, so he decided to focus on writing books.