Welcome to the book blitz for HEARTS, the first book in the adult fantasy twisted Wonderland retelling series, The Glass Queendom, by Klarissa King. See below for information on the book, buy links, an exclusive excerpt, and details on her giveaway. 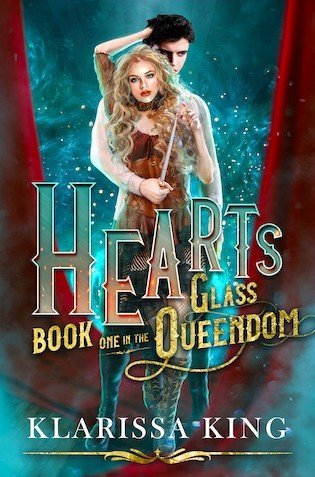 Synopsis
In Spades, there is a game as terrifying as the Sisters of Fate. The Hatterthon. A game so cruel that its brick-roads run red with blood and in every shadow there are players killing to survive. The mysterious Ringmaster seized the Hatter’s once-delightful game long ago, and branded it with his mark. The stain of death…

All I ever wanted was a peaceful life. Most other blacksmiths have no trouble holding onto small dreams like mine, and I’ll envy them for it for all my days. Not only is my village attacked by the Heart-Breakers, in the battle I’m thrown down the Forbidden Well. I land in the most unimaginable place, a place of true terror and wonder. A deadly game called the Hatterthon.

If I’m ever going to get back home, I have to win this dangerous game, where the brick roads run red with blood and allies are just waiting to plunge a blade into the nearest heart. I can’t trust anyone here—especially not Night, the definitely wicked ally I picked up along the way. I’m not sure which is more dangerous: Night, who wears deceit behind the veil of his captivating eyes, or the greatest threat in the game—the Ringmaster. All I know is, I have to strike down my ally before he turns on me and breaks much more than my bones.

Because only one can win the Hatterthon. Before I lose myself to the madness…

In Spades, kisses taste like sweets and wine, and only when they end do you taste the poison on your lips. Hearts is a Wonderland retelling (Hold the Alice!) and is the first in the Glass Queendom Duology. The sequel, Spades, The Glass Queendom, will be released later this year.

HEARTS is no longer a part of the Feared Fables series.

Night haunted my dreams.  We stood, trapped in darkness, lost in the Black Woods.  I knew I was dreaming, though I still breathed a burning question and let it whirl around us like a faint gust of wind.

That was what he meant by coming into my dream, wasn’t it? Showing me the graveyard of magic, the death all around us. He meant to show me where I would meet my own end.

Night’s striking face betrayed nothing. He stepped closer and power pulsed over the inky floor, rippled over my bare feet. My toes dug hard into the black mud and a shiver seized me. In my dreams, nightmares took over. In my dreams, I was my rawest self. I was afraid, and there was no point to faking bravery before him. He wasn’t real.

Bleak eyes stared back at me, and in them I could see the yearning for the woods around us. They longed to be one, connected. And I was the broken bridge separating them.

“Is death what you crave, Shoshanna?” His voice was steady, sounding faraway like he was a dream within the dream. Still, even faint, the steel of his voice cut through me. A blade to a bleeding heart.

His eyes turned dark, blacker than my stained veins and the woods caging us.

I blinked. And in that moment, he delivered his promise.

Death was all around me.

At my feet, twisted in a circle, were the bodies of all who I’d ever known. And those who I had killed.

Night’s hand found my chin and gripped, hard. I winced, even in the whispered pain through the dream. But it wasn’t enough to wake me.  He came closer, the trees’ blackness turning to tar, melting away.

“I can give you freedom,” he said, his voice low and seductive enough to flip my stomach and churn my blood with hate. “I can give you the worlds.” He inched closer, and I could taste the caramel on his breath.

‘It’s only a dream’, crooned a chilling voice I wished I could forget. A child’s voice from a deep, damp well that stole my future away from me.

Night’s fingers cut deeper into my chin, locking me in place, as he brought his face to mine. Twilight eyes searched my gaze for answers, for something he hadn’t asked. The Black Woods melted away, but I was the one to melt into him.

It’s only a dream.

Sisters whispered all around me, as though speaking right into my ears, but it was all darkness. The only light I had to hold onto was the pull of Night’s glittering eyes as he turned them down to my lips.

I parted my mouth, letting out a shuddering breath. I became a puppet on the strings of another. I became his, and he pressed his lips to mine.

It was all wrong.

Still…even as sickened as I was by him, I couldn’t deny it. The pull, the seduction of him. His darkness.

Too soon, Night pulled back and his cutting stare struck down at me.

About the Author
When not writing, Klarissa can be found in bed poring over a great new release, or reluctantly walking her demanding dogs who pretty much run the house.

She is the writer, Isla Jones. Isla uses the pen-name Klarissa for fantasy, while using Isla Jones for her darker, grittier horror works to help separate the styles and genres for her readers.