Welcome to the book blitz for KISSED OFF, a stand-alone young adult comedy/mystery/romance, by Tellulah Darling. See below for information on the book, buy links, an exclusive excerpt, and details on her giveaway. 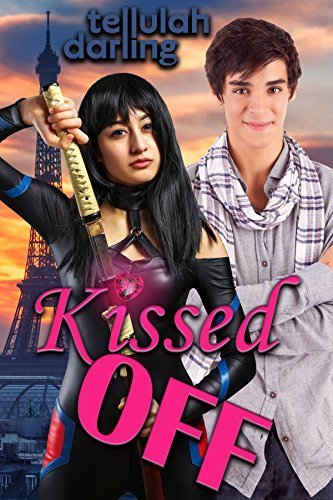 KISSED OFF by Tellulah Darling

Now the only question is: does this count as a date?

Sixteen-year-old Reiko Mori’s family has clashed with the Markows in a clandestine search for the famed Lover’s Kiss Ruby, ever since their ancestors killed each other over it centuries ago in Japan. Now, after pulling off a successful museum heist, Reiko’s finally going to be the one who finds the jewel. Even better? She’s just arranged a study date with hot-but-sheltered sculptor Levi Green to work on their English project. Things are looking good.

Until a mysterious third party attacks Reiko and Levi, intent on stealing her clues to the ruby. Until Reiko discovers the Lover’s Kiss is actually in Europe, an ocean away. And until goofy, affable Levi Green turns out to be Levi Markow, mortal enemy number one.

Plan B it is: reluctantly team up with Levi to find the priceless gem before the shadowy and deadly group on the jewel’s trail finds it first.

And if history is gonna repeat itself with the kissing, running, and screwing over, see which one of them comes out on top.

“‘I presume?’” Reiko dropped into a fighter’s crouch. “You’re missing the British accent.”

Levi put his hands up in a pathetic imitation of defensive position. Her cat could have landed a punch through those gaps. “And you’re missing the reality where we aren’t about to have an MMA showdown.”

Reiko smirked but lowered her hands. “Because I’d wipe the floor with your ass.”

“Says Hit-Girl masquerading as the resident shy chick all these years. Nice James Bond alter ego you got going on.”

“I am shy.” She grabbed a dishtowel and whipped it at his head. It fluttered to the counter, far short of its mark.

“Being around my sworn enemies tends to knock it out of me. Besides, you’re one to talk, Artsy Boy. Had everyone fooled.” Including stupid me. She pushed him backwards out of the kitchen, shoving him again and again until his back hit the wall next to the front door.

Levi fended off her next blow. The sweep of his arm knocking her hands away left behind a familiar faint hint of rubbing alcohol. She’d watched him use it to remove clay from his hands at school many times. Could she be more pathetically tuned into this guy?

Levi held out his hand, palm up. “Hand over the locket, sweetheart. The real one this time.”

“Sweetheart?” She pulled herself up to her full height. “Could you be more stereotypical bad guy?”

“He could have a mustachio to twirl,” Aviva said, from her avid spectator spot hanging over the bannister.

Levi rubbed the back of his neck. “I’m not the one blowing kisses before screwing people over. That a move passed down through the generations with you chicks? Think that adds weight to my family being the wronged party here, Mata Hari.”

“Mata…? Argh!” She snatched up the poker.

“Go ahead, brain me.” Levi turned out his pockets in a huff. “No ruby. Just lint. I’d hate you to pointlessly commit murder except, oh yeah. You Moris are bloodthirsty!”

“Better a bloodthirsty Mori than a cowardly, backstabbing Markow!” Reiko jabbed the poker at him.

Levi grabbed the other end, the two of them engaged in a furious tug-of-war for possession. He let go suddenly, sending Reiko staggering back a few steps

Reiko flung open the door and pointed outside. With the poker. “Get. Out.”

Levi held his ground for a minute but must have decided she meant business because he grabbed his shoes. “This isn’t over.”

“You’ll get the locket over my dead body, Lion Cub.”

“Great! Can’t wait to pry it out of your cold, rigor-mortised hands,” he snapped, and stomped out of the house, slamming the door behind him.

“Shit,” said Aviva, “this is really gonna put a crimp in your dating plans.” 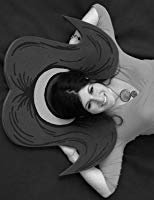 About the Author
Tellulah Darling
noun

2) Firm believer that some of the best stories happen when love meets comedy and awkwardness ensues.

Both a hopeless romantic and total cynic, Tellulah Darling is all about the happily-ever-after, with a huge dose of hilarity along the way. Her romcoms come in a variety of heat levels and flavors; straight up romantic comedy, shaken with Greek mythology or stirred with urban fantasy.