Welcome to the book blitz for MIDNIGHT, a stand-alone adult contemporary LGBTQ+ romance, by J.V. Speyer. See below for information on the book, buy links, an exclusive excerpt, and details on her giveaway. 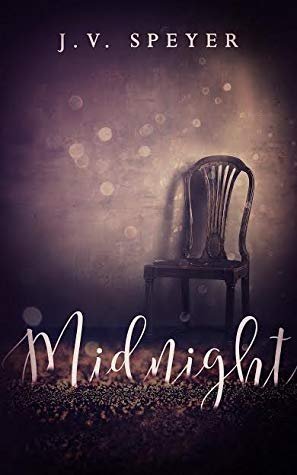 Synopsis
Brandon loved Adrian, so when Adrian abruptly moved out of their apartment Brandon was devastated. Six weeks later Brandon is ready to start to ease his way back into life again, but a chance encounter leaves him questioning everything he thought he knew – about Adrian, their relationship, and himself.

As Adrian’s true nature is revealed, Greg starts to wonder if maybe what’s best for both of them wouldn’t be each other.

Excerpt
Brandon sat down on one of the chairs.  “Yeah. I mean I know he had to hide. I knew that going in.  A lot of guys had to do that. Most of them figure it out. And I’m not mad at him or anything.  I just want to move on.” He frowned. ”What are you trying to get at here, Greg? Why does Adrian have anything to do with tonight’s party?”

Greg inclined his head down, toward the spot on the street that he hadn’t been able to tear his eyes from.  “Because he’s been here this whole time.”

Brandon choked on his gin and tonic.  “What?”

“He’s been sitting outside the condo, watching the building, this whole time.  I mean, I get it.”

“I don’t!” Brendon declared, standing up again.  He clutched his drink in his hand and couldn’t decide if he wanted to hurl it at the ex standing on the ground or if he wanted to go inside and hide.  Throwing the glass would be wrong. It would be irresponsible; it would get people hurt. He didn’t want to hurt Adrian, even if this latest stunt was creepy and stalker-ish.  “He’s the one who walked away. Why is he hanging around outside my building like some kind of lonely ghost?”

“He wanted your attention.  He didn’t know how to get it, and his ploy backfired spectacularly.  I think he regrets what he did.” Greg sighed. “I’ve been watching him all night, trying to figure out what to do.  I was thinking about bringing him in.”

Brandon spun, bringing himself face to face with his best friend.  “Why would you do that?”

“Because you love him, Bran!”

“So what?  I’m moving on, trying to rebuild my life.  Something you have not been shy about encouraging, I’ll point out.  And you want to just… what, drag him back in here? What could that possibly accomplish?”  He pulled at his hair.

“I thought it might give you guys a second chance.”  Now it was Greg’s turn to sit down, flopping into one of the other patio chairs like it was the only thing holding him up.  “I want to see you happy, Bran. I keep hopping this fence – I know you weren’t with the people who made you happy, but you seemed so perfect for each other.  And I desperately want you to be happy.” He sighed heavily, gesturing back in Adrian’s general direction. “But I didn’t do it. The guy’s in his thirties. If he wanted to come up he could ring the doorbell like an adult.”

Brandon shook his head and rubbed Greg’s shoulders.  “I knew I could trust you.” Greg leaned into the touch, just a little bit, and Brandon grinned.  “I thought we established that Adrian can’t make me happy at this point. We’re not right for each other, even if we thought we were.”

“I know.  I just don’t know what to do here.” He leaned back.  “I mean, this is kind of creepy. He’s just out there, watching.  If I’m not going to invite him inside, I probably ought to call the cops.”

Technically, Greg was right.  Brandon probably ought to call the police, because no good ever came from one ex staking out the other’s home like this.  “Do you think he’s dangerous?” Brandon hedged. “Seriously, has he said anything that’s struck you as dangerous?”

“Other than creepily hanging around outside your house?  Nah. Not that he’d say anything to me, you know?” Greg snorted.  “I’m pretty much the last person he’s talking to right now, except maybe you.”

“What do you mean?”  Brandon’s arms froze on his friend’s shoulders.

“He’s all pissy because I lit into him about stalking you through the rally.”  Greg waved a calloused hand in dismissal. “Like okay, fine, he wants to be with someone new.  Okay. And so what if the guy’s an undergrad – it’s a little weird, he’s a little young for a midlife crisis but who am I to judge?  But that whole thing – like anyone didn’t know what he was up to.” He shook his head again, and Brandon could feel his shoulders tensing up again underneath his hands.  “I wasn’t going to just sit there and not say anything.”

“What the hell for?”

“I never wanted to come between the two of you.   You’re friends. You should be doing friend things, not arguing over me.”  He turned away, clutching at his drink so he could do something with his hands. 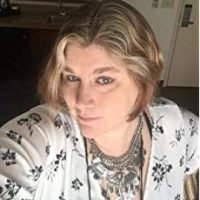 About the Author
J. V. Speyer has lived in upstate New York and rural Catalonia before making the greater Boston, Massachusetts area her permanent home. She has worked in archaeology, security, accountancy, finance, and non-profit management. She currently lives just south of Boston in a house old enough to remember when her town was a tavern community with a farming problem.

J. V. finds most of her inspiration from music. Her tastes run the gamut from traditional to industrial and back again. When not writing she can usually be found enjoying a baseball game or avoiding direct sunlight. She’s learning to crochet so she can make blankets to fortify herself against the cold.