Welcome to the book blitz for THE DEVIL’S WHISPER, an adult dystopian suspense, by T.H. Moore. See below for information on the book, buy links, an exclusive excerpt, and details on his giveaway. 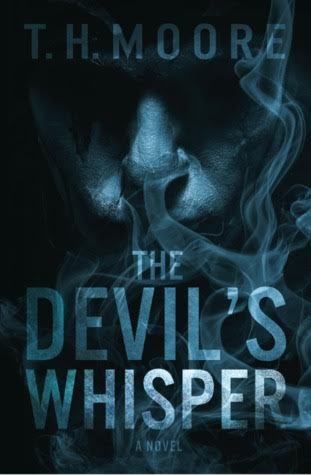 THE DEVIL’S WHISPER by T.H. Moore

Synopsis
Take a moment and imagine your history books devoid of war. Envision entire civilizations absent of heinous crimes against humanity. A planet spared from the plagues of slavery, cultural genocides, and the colonization of indigenous nations by foreigners. Would you dare make the choices necessary to maintain this Utopia in which universal peace existed? Could you ignore the Devil whispering in your ear, luring you away from a world in which loving your fellow man was the expectation, not the exception?

In a state of reverie, an impractical idea of world peace has given birth to a culture in which the human race has chosen to live free of violent criminals. Instead, criminals have been systematically exiled to the lone prison city, Katingal, constructed in a far corner of Earth. Sentenced for the remainder of their natural lives, the wicked pit themselves against their soulless brethren. Exposure, disease, and starvation claim their victims daily. Those who survive nature’s wrath negotiate the perils of the prison city through murder and cannibalism. All the while, this inimitable death sentence satisfies civilization’s aim to punish the world’s irretrievable outcasts.

Charles “Yäbälay” Gravo is the criminal mastermind behind the world’s largest human trafficking network. As a prime most-wanted fugitive, he sets into motion events that will forever alter the realities of both civilization’s Utopia and Katingal’s Hell.

Excerpt
Though Charles felt relieved to have discovered Kristoff’s lair, he could see that the savage was surrounded by his men. Nevertheless, Charles surged ahead, his heart racing in tempo with his legs as he moved closer to his objective.

As Charles drew near, a commotion broke out on the balcony. The group of men were drinking, dancing, and fighting as if the balcony were a mosh pit. One reveler grabbed another, while a third man struck the unfortunate chap with a pipe. He buckled, and with one swift movement, the two men flung their victim from the balcony. His limp body fell twenty floors to the hard pavement below. Charles heard the thump when it hit, and the cheers from a group of men who had been waiting for it on the street.

“The king is offering sacrifices tonight,” one maniac on the balcony cheered, hooting down at the dead man sprawled on the pavement.

Charles quickened his pace, staying close to the edges of the road. He ducked into a nearby building and crouched down in a dark corner, using his hands to gather a pile of dirt. He took a mouthful of the water from his satchel and pushed it around his mouth to alleviate his thirst before releasing a thin, controlled stream onto the dirt pile. After mixing the water and dirt into a dark paste, he covered his pale face until all that remained visible were his green eyes.

As he continued his trek toward the epicenter of the city, Charles heard the faint symphony of suffering. Angry yells of men coming from the east and bloodcurdling screams of women pierced the night to the west. Moments later, he slid past a band of filthy men vying for ownership of a corpse like a pack of wolves.

Another ruckus was followed by another violent assault. Just like the one before him, the beaten man was thrown from the balcony. He screamed the entire way down while the maniacs rejoiced from above. Scavengers sprinted past Charles to the man’s broken body and started ripping him apart.

Charles was fifty yards from the barbed wire courtyard that secured the front entrance to the Apex building. Another scream of fear, followed by another thud, a pitched body, and the scurry of the scavengers. This time, Charles was close enough to hear bones snapping against the pavement. He took cover to avoid the scavengers, and waited while they butchered the latest sacrifice with their homemade weapons.

Charles darted along the side of the building until he spotted four men guarding the back doorway.

“Four offerings so far tonight,” one of the guards warned the other three. “Two more before it’s safe to go back up there.”

“You sound like a woman, Manta,” the smallest guard said.

“Fuck you, Hiro!” He laughed. “You look like a woman. Now give me some pussy, you dwarf!”

“Curse me again and I’ll take your tongue,” Hiro seethed, pulling a short knife from his belt.

The other three guards erupted into laughter. “You call that a knife?” said one. “The only thing that knife is good for is picking your rotting teeth.” 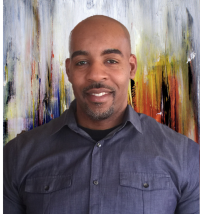 About the Author
T.H. Moore is a Southwest Philadelphia native who relocated to Camden, New Jersey at the age of ten. He’s an active member of Omega Psi Phi Fraternity, Inc., and earned a Bachelor of Science degree from Morgan State University. His career as an Information Technology Consultant and Real-Estate investor has afforded him the opportunity to travel to many countries all over the world as well as the majority of the United States. Blending experience with imagination helped formulate the basis of, and inspired him to write his first novel, ‘The End Justifies the Means’.

His second novel, The Devil’s Whisper, is uniquely creative fiction that ventures away from the inspiration of his own life experiences. In The Devil’s Whisper, he dives into a darker set of dual protagonists whose sole objective is to survive the circumstances of the world they live in. T.H. Moore is the proud father of one son, Jason, and currently resides in Virginia, where he is working on the next two installments of The Devil’s Whisper trilogy..