Welcome to the book blitz for THE FOREVER GIRL, the first book in the new adult fantasy/paranormal romance series, The Forever Girl, by New York Times bestselling author, Rebecca Hamilton. See below for information on the book, buy links, an exclusive excerpt, and details on her giveaway. 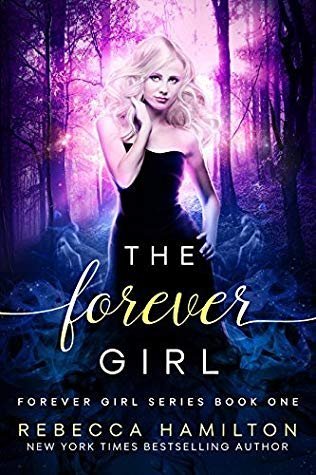 THE FOREVER GIRL (The Forever Girl #1) by Rebecca Hamilton

Synopsis
A young descendent of a true witch, Sophia discovers her familial curse can only be cured by entering a world of shifters, fae, and vampires who want her dead.

Sophia’s ancestor’s body went missing after a Salem Witch Trials hanging. Now, over three centuries later, Sophia is cursed, and the only way to free herself is to find out what happened to her ancestor’s body.

As Sophia uses magic to find answers, she unknowingly paints a supernatural target on her back, making herself a beacon for creatures of the night. And they won’t stop hunting her until they’ve collected what they want.

There’s one man who might be able to help her, but when Sophia finally decides to trust him, his own secrets place them both in more danger.

Scroll Up and One-Click The Forever Girl to start the hauntingly beautiful adventure today!.

Excerpt #2
Once Circe disappeared into the crowd, Thalia smiled at Charles.

“That one”—she bit her thumbnail and indicated me with her pinky—“would be valuable.”

A vein pulsed in Charles’ neck, and a soft hum vibrated through his body. Why didn’t he just shift?

“Surely you aren’t attached?” she asked, dropping her hand away from her mouth.

“You’re outside your rights, Thalia.”

“Temper, temper.” She sighed, the sound sickening coming from her. “But, my sweet Charlie, we’ve missed you. And what of Adonis and Blake? Have you forgotten who your friends are?”

“These women know nothing.” His voice sounded rougher, more gravelly. “Do not cross me.”

A young, scrawny vampire pushed his way through the crowd. He bowed toward Thalia. “I’m sure Charles can handle this…misunderstanding. He’s been around longer than both of us put together.” He arched his eyebrows.

Thalia stepped back, cocked her head to one side, and tapped a finger against her cheek. “Fine. We have their scents.” To Charles, she added, “Pray you handle this well.”

Represented by Rossano Trentin of TZLA, Rebecca has been published internationally, in three languages: English, German, and Hungarian.