Welcome to the book blitz for THE WITCH’S TOWER, the first book in the young adult fantasy romance series, Twisted Ever After, by award-winning author, Tamara Grantham. See below for information on the book, buy links, an exclusive excerpt, and details on her giveaway. During release week, you can pick up the eBook for just $0.99. 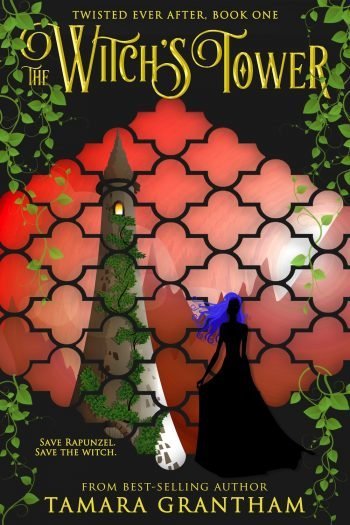 THE WITCH’S TOWER (Twisted Ever After #1) by Tamara Grantham

Synopsis
Gothel is a witch. Punished for the actions of her mother, her choice is simple: either she stands guard over Princess Rapunzel — or she dies. But just because a choice is easy doesn’t mean it’s pleasant. Protecting Rapunzel means watching as the princess lays trapped in a tower, bedridden by hair that is so long and heavy it’s slowly driving her insane. Gothel’s life has become one of imprisonment and solitude as well — until a prince and his handsome squire appear at the tower.

Only one object can cut Rapunzel’s hair and end the curse: a pair of magical shears. But the shears are guarded by the most terrifying witches in the land, who also happen to be Gothel’s aunts. As Gothel and the prince’s squire, Raj Talmund, work to form a plan, she finds herself more and more drawn to the mysterious young man from the Outerlands. Unfortunately, his destiny is far more dangerous than she wants to admit: to save a princess, he must kill the witch who’s been forced to guard her.

THE WITCH’S TOWER is the first in an inspired new series of fairy-tale retellings from award-winning fantasy author Tamara Grantham. 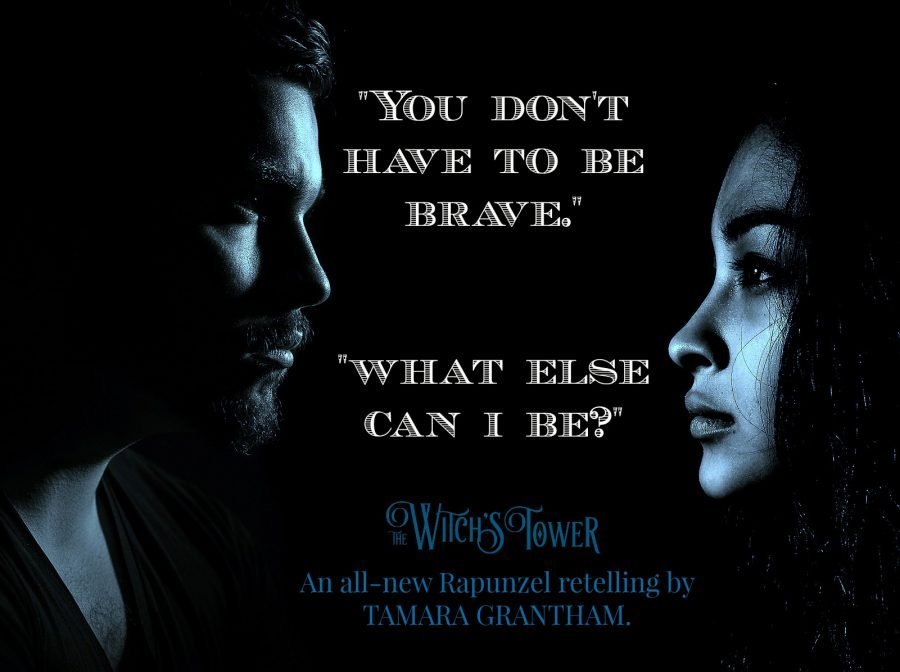 Excerpt #2
Moonlight illuminated the tower as Raj and I crossed into the meadow. The handcart’s wheels squeaked as I pulled it to a stop at the base of the tower. Raj had been true to his word and purchased all the supplies we needed for winter. I couldn’t complain—I was grateful he’d done it. I only hoped he didn’t expect a miracle in return.

Now I had the chore of transporting everything into the tower. Luckily, I’d brought my largest knapsack. As I loaded vessels of lentils, bags of flour, and a few jars of syrup into my bag, Raj stood over me.

“You’re bringing all that up there?” he asked.

“It’s better than leaving it down here.”

“You really live up there all the time?”

“Yes, I only ever come out to gather edibles, or when we’re desperate for supplies.”

“But how do you get water?”

“We have a well inside the tower. Can you help me?” I tossed him an empty burlap sack. If he was so insistent on being here, he might as well help me.

I eyed him. Lonely? What did he know of loneliness? I didn’t feel like admitting to this stranger how desperately lonely the past five years had been, how I lay awake at night wishing I had someone to talk to, feeling as if the silence would drive me to insanity. No, he didn’t need to know any of that.

“It’s not that bad. Rapunzel isn’t one for talking, but we have a cat. His name is Jester. He keeps me company most of the time.”

“Yes. He’s mostly feral. But he’s friendly enough, and he comes and goes as he pleases. He’s even learned to climb the vines to get in and out of the tower. He’s quite clever.” I adjusted the pack’s straps on my shoulders. “Now, let’s get up there before Rapunzel…” I stopped myself. “Let’s get up there.”

With the pack strapped to my back, I turned to the tower. Wind rushed past, battering my hair against my cheeks, as I prepared to speak the spell.

“Rapunzel, Rapunzel, let down your hair!” My words carried on the wind, echoing through the forest.

I waited, nervousness making my hands grow clammy as I held to the pack’s straps, but why did I feel so uneasy? Was it because Raj was with me?

I turned to him. He stood with haunting dark eyes as he watched a coil of ropy, matted hair drop from the tower’s only window high above us. I stepped to the length of hair and grabbed it, holding my breath against the scent of unwashed scalp. I never got used to that smell.

“Yes. But let me enter first.” Gripping the hair tightly, I started the climb. I made my way toward the window at the top of the tower. Halfway up, my muscles burned, and I focused on breathing to make it the rest of the way. This part was always the hardest, and the sack of supplies weighing me down wasn’t helping. Why did Varlocke have to put his daughter into such an impossibly tall tower?

When I reached the window, I grabbed the ledge. The worn stones felt smooth under my palms as I climbed over, then landed inside. As I straightened, I pulled off the pack and left it on the floor, then focused on the room. Moonlight illuminated the bare stones walls, the well sitting at the room’s center, the wooden chairs, roughly-hewn tables, huge bookcases cluttered with dusty spell journals and vials, and the bed where Rapunzel lay.

I stepped over the matted coils of hair. Pieces of rat and bird bones lay trapped in the knotted strands, seeming to glow white against the dark hair. The sound of gnawing stopped me.

“Rapunzel,” I said quietly. “What are you doing?”

The gnawing continued.  I approached her on quiet feet, afraid of what I might find. Behind me, Raj scrambled inside the room.

Please don’t let it be the prince.

When I reached her side, her pale, skeleton-white skin glowed in the moonlight. She held a rat.

I exhaled, grateful it was only a rodent and not something—someone—else. A crust of bread and a handful of wild beets sat on the bedside table, but they were untouched.

Raj’s footsteps echoed, and I turned to face him. His tall, lean frame looked so out of place. Only the high sorcerer ever visited, and to have an Outlander squire inside my home unnerved me.

“Is she eating something?” he asked. “What is that?”

“Sorry. It’s the cat’s fault. He catches them and leaves them on her lap. He thinks he’s giving her a prize or something. Rapunzel does that with them sometimes—with the rats—eats them, I mean.” I stumbled over my words, feeling immeasurably mortified that Raj had to see it. But it could’ve been worse.

I approached her. She looked up, as if only seeing me now, and she hissed. With her red-rimmed eyes, it looked as if she hadn’t been sleeping, and her collarbones seemed to be protruding more than I remembered. Her white gown hung off her meatless frame, but at least it was the clean one I’d left for her. She’d managed to change clothes—at least there was that.

“Where is the prince?” Raj asked.

“I don’t know.” I scanned the room. With the large piles of hair covering the floor, he could’ve been hidden, but we should’ve seen some clue he was here—his feet or a hand poking out. Something. “You’re certain he came up here?”

I studied the tower more thoroughly but didn’t see anything that resembled the prince. Odd. Where was he?

“Rapunzel,” I said, turning to her, “we’re looking for a prince. Have you seen him?”

She shook her head, clutching the rat, her fingers digging into the carcass.

“Please,” Raj said. “I need to find him. His father is the king. He’ll be very sad if he loses his only son. Can’t you tell us where he is?”

Rapunzel focused on the man, but she remained silent. Outside, the sky lightened. Pink streaked through the gray as dawn approached. As the sun rose, sunlight streamed into the room, giving light to the dark places. Something thudded inside the well, and Raj followed me as I maneuvered around the coiled hair toward the raised ring of stones surrounding the deep drop that went straight through the bottom of the tower.

“Is there something in the well?” Raj asked.

I pried open the lid. Sitting atop the wide-mouthed bucket was the prince, who stared up at us with a vacant expression. Hair coiled around him as blue bands of magic wrapped his wrists and ankles. I grabbed his tunic with both hands and attempted to lug him out. He was heavier than he looked.

“Rapunzel. She tried to throw him down, I assume.”

“With her hair, yes. She’s clever when she’s motivated.”

“He was looking at me!” Rapunzel yelled. Well, at least she was finally speaking. 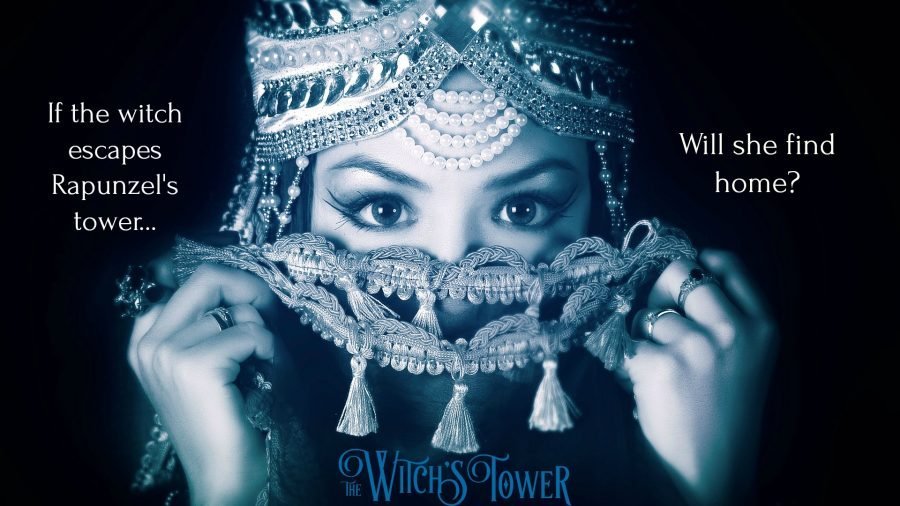 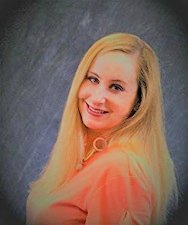