Welcome to the book blitz for UNTAPPED, adult romantic thriller from the Bad Boy Crime series, by Logan Chase. See below for information on the book, buy links, an exclusive excerpt, and details on his giveaway. 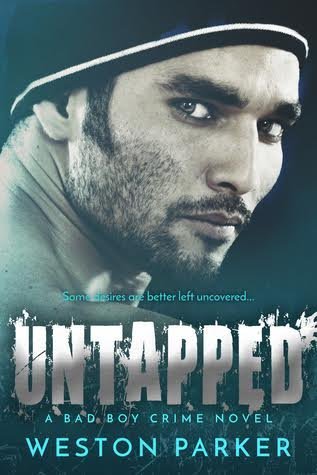 Erik Bertinelli is the son of the vilest mob boss in all of New York’s underbelly. He’s the enforcer, the hitman for the syndicate, and the type of guy who doesn’t mind getting his hands dirty. His hideaway is as unconventional as they come… the New York Public Library.

With a thirst for knowledge and a grand getaway at his fingertips, he loses himself daily in the dusty tales of old. Life is too f*cked up most days of the week. Peace would be beyond welcomed.

Grace Adams desires more than anything to live fully alive, and yet, she’s doing just the opposite of that. She’s a librarian at the New York Public Library and spends her days wishing like hell that she could disappear into one of the romance novels she reads.

With an imagination that would shock her family and friends, she keeps to herself and lives in the colorful parts of her mind – alone. Untapped.

When the same deliciously dangerous alpha male keeps showing up between the bookshelves, her daydreams quickly dive into passion that feels too good to be true. The kind that could burn anyone involved. The kind she would do anything for. Maybe even kill…

“It’s finally starting to get cold.” Thomas glanced over at me and smiled as we jogged side by side. His freckles were fading now that summer was gone, but a faint splattering of them was still there.

“This isn’t cold.” I snorted and reached up to tug at my ponytail as we ran past the University. The library rose up in the distance, and I felt a sense of belonging. I’d been working there for a while, and even though I had some difficulty with some of the staff, most of the people there liked me. And it was where I could find Erik.

“Hey. Did I lose you?” My brother reached over and tugged on my sleeve.

“Oh yeah, sorry. There’s this new guy at the library, and I think I’m going to ask him out.” I turned the corner and slowed for a minute as my lungs screamed for air.

“You’re my older brother, dimwit.” I stopped by a cement bench and dropped down to fix one of my tennis shoes. “You’re not supposed to like it.”

“When do I get to meet him?” Thomas ran in place as he scanned the lawn in front of us. His smile widened as he lifted his hand and waved. “Kara. Nancy. Hey girls. Looking good.”

“Oh brother.” I stood up and reached up to adjust my hair again as I turned to see who he was waving at. Cheerleaders. Had to be. Their shorts looked more like panties, and they were wearing sports bras. “There should be a dress code out here. That’s just offensive.”

He laughed. “Just because you dress like a Granny doesn’t mean you have the right to be ugly about other girls dressing their age.”

“Oh yeah?” I lifted my eyebrow and ran my hands down my long-sleeve t-shirt. “And you’d be okay with me wearing what they have on?”

“What?” His brow pulled tight. “Hell no. That’s not happening.”

“Right.” I rolled my eyes and started to jog away from him. “What did you want to talk about that we couldn’t talk at home where it was warm and cozy?”

“Mom and Dad were there, Grace.”

“You could have come by my apartment.” I glanced over at him, noticing the dark circles under his eyes now that I was really looking. He’d been a little on edge lately, but he was nearing his last senior semester at NYU. I assumed it had everything to do with that. What other stress could he have in his life? He was president of the largest fraternity on campus and everyone worshiped the ground he walked on.

Everyone but Jenna. I forced myself not to chuckle. My poor brother had been after my best friend for years, and Jenna was oblivious to it. Now he was too late. She was dating a hottie bad boy from the coffee shop where she worked.

“I hate going to your apartment.” He shook his head. “It’s embarrassing enough getting caught in a movie that has a sex scene with your little sister, but to go to her apartment and hear the perverts next door bonking every fifteen minutes is sick. No fucking way. Count me out.”

“Fucking all the time is cute?” He lifted his hand as he paled a little. “You know what? Don’t answer that. We’re good just talking out here.”

“Alright. Spill then.” I laughed as he gave me a ‘watch it’ look. My brother was a bit of a prude from what I knew, but we never really talked too much about our love lives. That was gross.

Love life. What a fucking joke. I’d never been tongue kissed by a guy, much less anything else. After my mother had Thomas when she was sixteen, she used a scare tactic to keep me a virgin, and it worked well.

I’d never been around anyone that left me wanting to defy her and my father and spread my legs anyways. Not until Erik Bertinelli. The thought of him left my heart racing, my body tightening. The things I wanted him to do to me were over the top, horrible, embarrassing.

About the Author
Romance is a genre that is oftentimes written by women, but my novels give you the chance to see through the eyes of some of the men that perhaps you fantasize about, and the opportunity to read about passion from the other side for a change. Stories told about real relationships, legit problems and past experiences… unless you’re an ex, in which case any resemblance to women living or dead is merely a coincidence. 😉

My name is Weston. I’m a full time firefighter during the day, but I’m not here to put out any fires. I’m here to start them. Hope you enjoy my stories and feel free to reach out at any time. I love to flirt.