Welcome to the book blitz for UNVERIFIED, a stand-alone adult contemporary romantic comedy, by Kristin Giese. For a limited time, you can pick up the ebook for FREE! See below for information on the book, buy links, an exclusive excerpt, and details on her giveaway. Be sure to grab your free copy today! 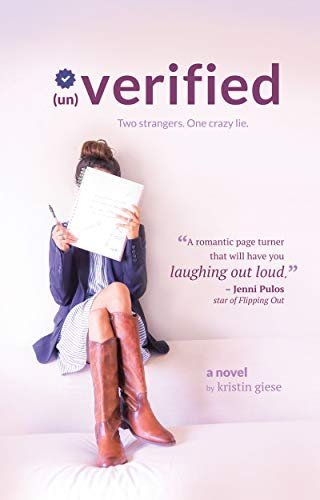 Synopsis
Matthew Milles-Lade, a rich kid whose trust fund is suddenly in question, and Margo Valentine Melon, a writer whose career fizzled before it sparked, are two twenty-something strangers stuck living at home, trying to figure out their lives. When they each come across a real estate listing for a palatial (and significantly underpriced) guest house in one of LA’s toniest neighborhoods, their lives get turned upside down.

What happens next has them racing to catch the truth before it catches them.

Unverified has all the magic and making of the rom coms you love, set in the world of social media stardom and online fame, with just enough real world stakes to make it a page turner you won’t be able to put down. 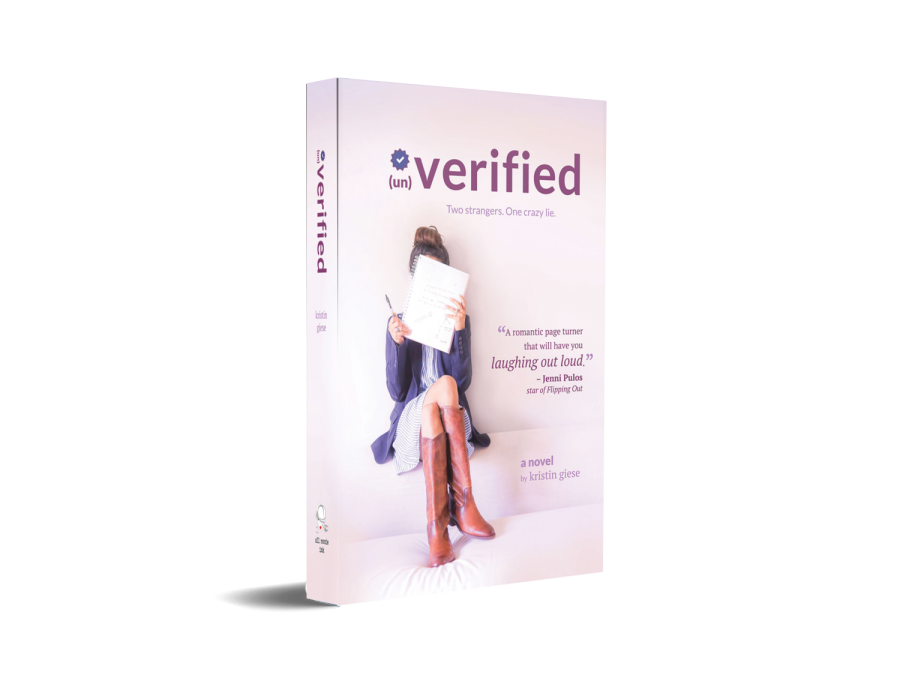 Excerpt
“Kirby, when do you move in?” Maureen Melon shrieked as Margo walked into the kitchen. “Did you hear that M&M? Kirby bought a house!”

“I close next week. And then after that,” Kirby trailed off, lost in a haze of euphoria before exclaiming, “I’m gonna be a homeowner at 24! Can you believe it?”

They both looked at Margo with stars in their eyes.

Margo had moved home as a stopover after a failed stint at Popler, the holy grail of fashion magazines, but that was four years ago now. She’d nabbed the position her senior year and crammed her entire world into two checkable duffel bags and flung herself across the country to a rundown studio in Harlem. In real life it was 246 square feet of worn walls and sloping floors.

Perfection, Margo had thought the moment the door swung open. Her first day, she arrived ready to run the place. But, after eight weeks of only filing, running errands, and fetching coffee, she surmised she wasn’t being used to her fullest.  So, with an abundance of entitlement that she mistook for confidence, Margo marched into her boss’s office. Lennox Stanton sat before her picking apart a vegan burrito like a vulture clad in Balmain as Margo launched in: “People say you have to start at the bottom, but I don’t think that applies to everyone. Some of us are meant to start several rungs up. I’m happy to get your coffee every once and a while, Lennox, but I’d like to be given more challenging duties if I’m expected to remain in my position.”

Five minutes later, Margo was on the corner of 45th and Times Square holding the contents of her desk, three packages of Little Debbie snacks, and a fake cactus. Lennox Stanton had fired her.

Her parents had encouraged her to bootstrap a way to stay in New York. “I’m not just taking any job, Dad,” she’d protested. “I wanna write, not wait tables.” The next day, she bought a ticket home. “It’s fine. I’ll take this time to write,” she informed her parents as she hefted her suitcase off the baggage carousel. Their worried glances said they weren’t so sure.

Kirby, on the other hand, skyrocketed. While waiting in line for coffee in between her classes Kirby had met a coding student, David, from the technical school across the street. Together, the pair formed a resale fashion start-up, Blush & Bashful, selling Kirby’s vintage finds. Surprising even to them, it took off and took them with it. Kirby went from a girl with no professional drive to driving a Mercedes in two short years. As far as Margo was concerned, that ride, metaphorically and literally, was supposed to have been hers.

Margo shook free from the memory to find her mom passing Champagne flutes through the window that connected their dining room and kitchen and robotically grabbed them. She lapped the table placing one flute at each seat.

“What do you mean a channel?” she asked as Kirby joined her relay team, falling in rank behind her, placing napkins at each stop.

“I mean a channel, AN ACTUAL CHANNEL. I’ve already started shooting videos for the site, and we’re changing my title to editor in chief and style director. Can you believe…”

Margo halted. Kirby smashed into her back. “What?” Margo asked indignantly. “You’re an editor in chief just because some coding school dropout gives you the title?”

“MARGO!” her mother reprimanded. Silence stood like soup in the room.

She knew she should stop but didn’t. Couldn’t. “I’m the writer. Not you. What have you ever done? I mean, really, Kirby? Seriously?” she asked, each word punctuated with accusation.

“You made eyes with a guy in a coffee shop who wanted in your pants and somehow you parlay that into a self-professed editor in chief title. You’re such a fake. And….”

“THAT’S ENOUGH!” Hank Melon boomed from the doorway. “Margo Valentine Melon, you will not speak to your sister that way. What has happened to you? You’re the one who quit. Not me.

Not your mother. Certainly not Kirby. You. You gave up. You threw in the towel. And yet here you are trying to hang all of us with it. I don’t think so, young lady.”

His words stung, mostly because they were true. Margo wanted to yell at them, like a child who drops their ice cream and then shouts at everyone standing around for what was their own mistake. She bit her lip to keep it from trembling, placed the remaining flutes on the table, and rushed out.

“Margo?” Kirby started behind her.

“Give her a minute.” Maureen grabbed Kirby’s arm.

Carved into the side of the hill halfway down Beverly Crest sat Coyote Café, a small sliver of an establishment that was easily missed thanks to its hidden façade, so much so that Margo had missed it. She had to go down the hill and turn around, driving back up to locate it. She waited for one of the only spots in the lot that her beat-up Bronco would fit into. When she walked into the café, she stepped in a puddle of water. Damn it! Chelsea’s McQueens!

Margo felt herself relax, the anger shaking free from what had just happened up the hill. “Ain’t that the truth,” she said, smiling at his positivity.

Margo rattled off her order and paid at the register.

“Take a seat.” He pointed to the booth. “I’ll get that right out to you. Want any pastries?” he asked, as he began to grind coffee beans, gesturing with his head toward the counter brimming with cake stands. “We make ’em homemade daily. I get up at 4 a.m. just to do it.”

Margo looked at the counter and spied the pile of at least ten croissants under an elegant glass cloche. She thought of Mix’s request for the flaky and buttery baked goods. “Nope, all set,” she said as she took a seat.

As Margo sat in the oversized walnut booth, a flood of anger and uncertainty washed over her. Universe, God, Beyoncé, Oprah, give me a sign of what I’m supposed to do. I thought I was on the right path, but I don’t know. I just need a sign of what to do next, of where I belong…. 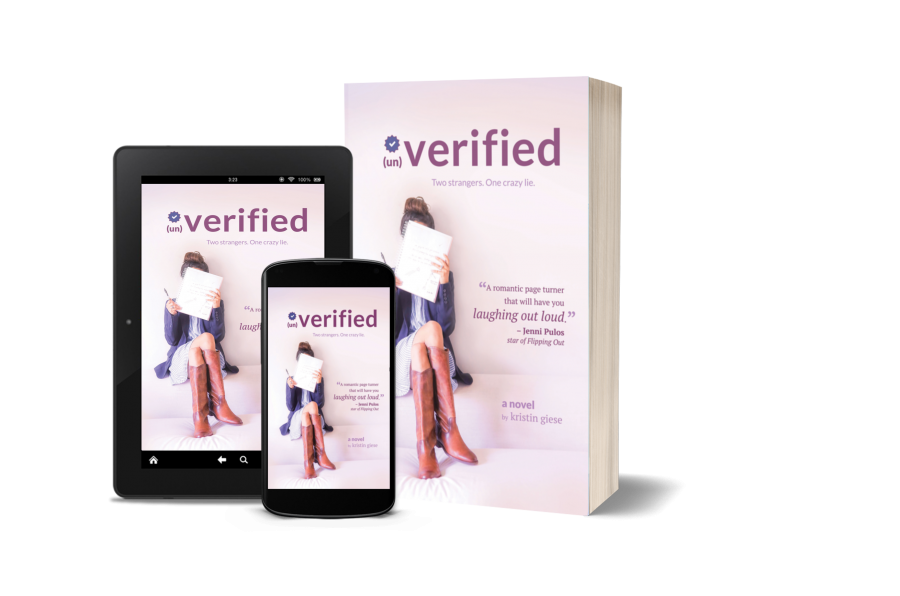 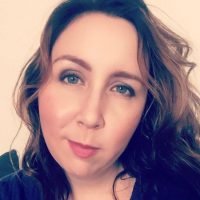 About the Author
Kristin Giese is a talent manager, brand developer, and executive producer who began her career building the entirety of the Nate Berkus brand, amongst other talent as well as partnering with the likes of The Oprah Winfrey Show, OWN, Sony, Target, TLC, NBC, P&G, GMC, and so many more.

Born and raised in Ohio and a proud Shelby Whippet, Kristin’s love for estate jewelry is only outmatched by her commitment to vintage kimonos and her family. Unverified is her 1st novel. Follow her on Instagram @allmoxie.