Welcome to the book blitz for TAINTED LIES, an adult science fiction thriller in the Dream Walker Division, by Leona Nation. See below for information on the book, buy links, an exclusive excerpt, and details on her giveaway. 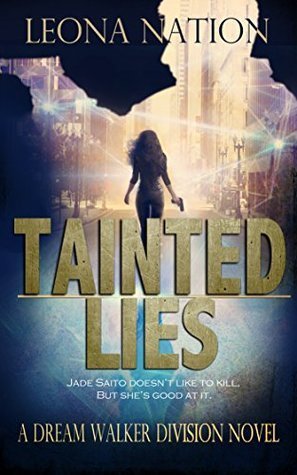 Synopsis
When you’re a spy with special abilities, you do what you must to save the ones you love—even if that means killing. Jade didn’t choose this life, it chose her.

Twelve years ago, Assassins forever changed Jade Saito’s world with flames and bullets. She was saved by the Dream Walker Division, a covert branch of the CIA consisting of people like her—agents with the ability to dream themselves into another’s reality as unseen observers. They also happen to be stronger, faster, and have photographic memories, making them optimal spies.

Now Jade is a field agent for the DWD where she and her unit use their abilities to take down criminal organizations. When DWD leaders start turning up dead, the compound is shaken to its core. If the leaders of the DWD aren’t safe from Assassins, no one is. But the deeper Jade digs the more she realizes not everything is as it seems. Will Jade stop the Assassins before it’s too late? Or will they they murder everyone she loves—again?

Excerpt
When fighting, I think about nothing but the moment. There’s no room for obsessing over the Assassins, being depressed over Brooks, or mad at Shea for wanting to leave. There’s only my opponent and me. Defeat or be defeated. I want to drag out the fight, use it as an escape. Some people revert to alcohol and drugs for escape, I use ass-kicking.

“I’ll take you down even with my gimp arm and without using pressure points,” I say.

As I re-wrap my gloves, I gaze at Shawn with a wicked grin. “You forget who you’re talking to.” Shawn might have more muscle in his one bicep than I do in both of mine combined, but I can still beat him. It’s all about physics, about knowing how to use one’s weight to one’s own advantage. This is going to be fun.

I finish strapping on my gear and join Shawn in the ring. Paramore blares through the speakers and the recruits shout encouragement at us. We meet in the center and tap knuckles. Shawn gives me a wink. I laugh.

We dance around each other––backs rounded, chins down, guards up––waiting for the other to strike. Shawn is skilled and with his strength, he could knock me out with one good strike. He’s also much slower than I and tends to tire out faster. Even with working myself harder in warm-up, I have better stamina than him.

He throws a right jab. I easily dodge out of the way, light on my toes. Next he throws a combo: right jab, left hook and round house. I sidestep the jab, knock the hook away and duck under the roundhouse. I take advantage of him being on one leg and sweep his stationary leg out from under him. Shawn falls to his back with a thud, his eyes wide. I let him jump back to his feet. Although I could have, I’m not ready to end it.

Ten minutes later, Shawn’s breathing is labored. We’ve both gotten some hits in, but nothing either of us can’t recover from quickly. I see my next opening when he throws a hook followed with a spinning back kick. Not the smartest move when you’re already winded, so really, he deserves what’s coming.

As soon as Shawn’s back is to me I throw a hard kick to the back of his knee sending him to the floor in mid-kick. I jump on his back and initiate a rear naked choke hold. My arm is wrapped around his neck, under his chin, and secured into place with the other one so I don’t slip off from the sweat. My wound burns like hell, but I refuse to give up. I have him. I push his head into the crook of my arm and squeeze tighter. My arms look like a milky cobra against his dark skin.

“You better tap,” I say, out of breath. “I have no problem putting you to sleep, big guy.”

Shawn grunts, struggling to get free. I add more pressure until he finally taps. I release him and collapse on my back next to him.

“Good workout,” I say, and slap him on the shoulder. “I told you that you had no chance today.”

“Damn, girl,” Shawn says between breaths. “I feel sorry for whoever pissed you off. By the way, you’re bleeding through.”

I look at the bandage on my arm. A red blotch is staining the white cloth.

“I’m trying not to gain any satisfaction from it.” He rubs his head. “If I have to lose, at least I know it’s hard on you.”

My music suddenly stops in the middle of a song. I lift my head to see Shea standing at the radio. Shea and I glare at each other for a moment. Ugh, why can’t she just follow the rules? Yeah it sucks sometimes. Brooks’s hurt eyes flash in my mind and pain explodes in my heart again. Really sucks. But that’s how it is in our world. Breaking the gaze, I get up and peel off my sparring gear.

Shawn whistles a long note, looking from Shea to me and back again. “Now that’s a fight I wouldn’t mind seein’. You all are pissed.” He chuckles. “Chick fights are hot. Can we throw in some mud? Or oil?” He nods his head. “Definitely oil.”

“I’m just sayin’. It would make you feel better if you hashed it out.” He spreads his hands and shrugs his large shoulders. “Well, at least it would make me feel better.”

“Can’t blame a brother for tryin’.”

As I grab a bottled water from the gym fridge, Shea and I continue to ignore one another. I head for the door, glancing down at my bleeding arm. After my shower, I’ll need to make a stop at the infirmary. I step out the door and almost run smack into Carol Breakenridge, head of the Europe DWD. She brushes off her jacket like I ruined it. Her blond hair is pulled away from her face, accentuating her angular features and large blue eyes.

She crosses her arms across her chest. “Yes, you should be,” she says in a clipped tone heavy with a French accent.

“It was an accident,” I reply in a less friendly way. “I didn’t see you.” Head or not, between being ignored earlier and my all-around crappy day, I’m about out of patience.

“I was referring to that display in there,” she says raising her chin at the gym. “Why did you not finish him when you had the chance?” She apparently watched the fight and must have seen when I let Shawn get up. “You should never hold back your strengths. If you do, you may die.”

We were just training, working out. It’s not like we were in a real fight. Even though I’m annoyed with her overreaction, I nod and give her the respect I should. “I’m sorry, ma’am. I would have done better had I known you were watching.”

She drops her voice to a whisper, and raises a perfectly waxed brow, “Dear Jade, you are always being watched,” she smiles slyly. “Analyzed. Your actions may affect more than just you.” She turns and walks away, leaving me with an uneasy feeling. I’ll be more than glad when the Heads leave. 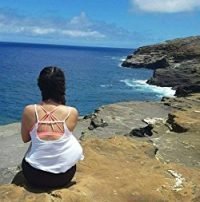 About the Author
Leona Nation lives in Chandler, Arizona, with her husband, four kids, cat and dog. Her imagination often got her into trouble in her school years, but she finally realized she could put her imagination to good use by creating worlds of her own. She loves to write, read, travel, bake, binge-watch shows, and anything else she can do to avoid her true nemesis: house cleaning. When she’s not writing, she’s taking kids to football, volleyball, dance, horseback riding, helping with homework assignments (unless it’s math, then she’s useless), and saying the word no way too often—as is the job of a parent. She loves that her husband of seventeen years can still make her heart skip with just a kiss.