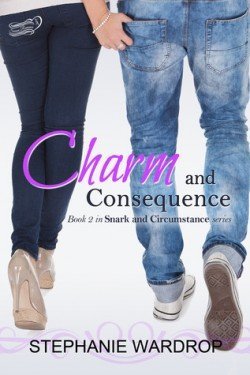 Charm and Consequence (Snark and Circumstance #2) by Stephanie Wardrop

Synopsis
Sixteen-year-old Georgia Barrett is no expert on guys, but her bio-class partner is harder to dissect than anything in their lab tray. He’s smart, almost as sarcastic as she is, and cute in that preppie way.

Things are great . . . until he decides her vegan activism is ridiculous and suddenly can’t refuse a date with her fast enough. So why does he show up at her door, interested in learning how to make tofu ricotta? And why does he seem so upset that a senior hottie has taken an interest in her?

My Review
Charm and Consequence picks up where Snark and Circumstance left us. Georgia’s older sister, Tori, is still cozy with newcomer, Trey, younger sister, Cassie, is still tight with Rick “the Brick” and even uber-conservative, Leigh, is getting her neck bruised by Alistair, the preacher’s son. Georgia is still sadly single, at least until hot and hunky Jeremy begins to show flirtatious interest in her. On top of that, things with Michael Endicott are getting interesting. Instead of fighting every chance they get, they’re actually having interesting, thoughtful discussions.

Plot
The second book in the Snark and Circumstance series is still centered around Georgia’s relationship with Michael. At the end of book 1, they seemed to tame some of their animosity enough to allow an almost friendship to begin to take root. But any good teen romance wouldn’t be complete without a healthy dose of angst as Georgia and Michael go back and forth in twisted seesaw fashion between almost flirting to outright animosity. Things reach the pinnacle of interesting when Georgia attends the Harvest Ball and is invited to dance by both Michael and Jeremy. And they go from interesting to downright fascinating the night of the New Year’s Eve party.

World Building
We get to learn a little more about the world of Longbourne and understand some of the social hierarchy of a small town with it’s own version of royalty. I have to admit, living in a big city, this isn’t something I’m familiar with, but I found it fascinating nonetheless.

Characters
The character development continues, as Stephanie Wardrop fleshes out the characters she introduced in Snark and Circumstance. I’m getting to know Georgia even more, and I really like her. Sure she can be annoying, but her heart is in the right place most of the time. Michael is also growing on me and I think I learned more about him in this book than any of the other characters. I still find Cassie and Leigh, along with their parents to be pretty flat. I’m hoping that changes soon.

2. Tori. She goes through a bit of an emotional upheaval this time around, and we get to see more sides to her, rounding her out nicely.

3. Michael. He’s even more layered than I thought, and though he has many faults, he’s definitely one of the good guys.

4. New Year’s Eve. The party is particularly interesting as it so accurately reflects a teen party and builds to an interesting conclusion.

5. Philosophical Discussions. Because they lead to better understanding of characters across the board.

Bottom Line
I enjoyed Charm and Consequence more than its predecessor. Stephanie Wardrop increases the stakes and draws out the main characters, creating conflict in all the right ways.

About the Author
Stephanie Wardrop grew up in Reading, Pennsylvania, a town mostly famous for being a railroad card in Monopoly. After giving up on her childhood goal of becoming a pirate, she decided to become a writer but took a detour through lots of college and grad school and ended up teaching writing and British and American literature.

She’s the author of the Swoon Romance e-novella series Snark and Circumstance, based on Jane Austen’s Pride and Prejudice, and lives in western New England with her husband, kids, cats, and gecko.