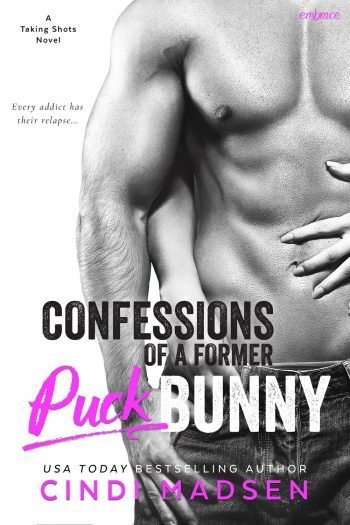 Synopsis
Confession #1: I used to be a puck bunny, but after a hockey player broke my heart, I gave up all things hockey. Now I’m just focused on finding a way to pass my math class so I can graduate college.

Confession #2: Ryder “Ox” Maddox’s deep, sexy voice sends fuzzy tingles through my entire body, and I’m powerless to stop it. Which is a big problem since the hot, surprisingly funny hockey player is my new math tutor.

Confession #3: I can’t stop thinking about how ripped Ryder is from all his hockey training, and how fun it’d be to cross lines with him.

Confession #4: I kissed a hockey player and I liked it.

Confession #5: If I’m not careful, I might relapse and fall for Ryder, and then I’ll be totally pucked.

My Review
I loved the idea of this book — a girl who used to chase hockey players who realizes she doesn’t like who she’s become, is pursued by a hockey player. But the execution didn’t live up to my expectations. I found Lindsay to be extremely annoying, but I did like Ryder. Lindsay went back and forth between knowing who she is and being unapologetic about it, to being ridiculously unable to control her own hormones around Ryder while keeping him at a distance. I’m frankly shocked he put up with that. Especially because the only thing he seems to like about her initially is her appearance. He talks about how hot she is all the time. It’s almost as if he only wanted the challenge of the chase, except he didn’t really seem to enjoy that. The author writes well and the story is well plotted, I just didn’t like the characters. This happens sometimes and based on the other reviews I’ve read, i’m in the minority.

Plot
The plot is Ryder and Lindsay’s relationship. Ryder offers to tutor her in math and thus are forced together. Ryder pursues, Lindsay can barely control herself, yet somehow does, in a back and forth that seems to go on way too long. There are some decent subplots, like Lindsay’s family issues. Her mother relies on men to support her, and Lindsay swears she’ll never be like her mom. Ryder is also preparing for the playoffs, so a relationship may be the last thing he needs, and yet for some unknown reason, he still goes hard after Lindsay. Where the book really worked for me was the hockey aspect. Practice, athletic superstition, parental expectations, and the team dynamics all worked together to keep me invested in the story.

Characters
They both came across as shallow to me. Early on, Lindsay mentions a friend who settled down with a nerdy type, which she can’t understand at all. She’s all about the hard bodies and good looks. Same thing with Ryder. Lindsay’s relationships with other girls is unhealthy, although she does realize that as well as the fact that it’s her own fault. Where I liked Lindsay the most was when I read her confessions. These were heartfelt and honest. But then she’d do something completely stupid and I lost my tenuous respect for her. The rest of the characters intrigued me, though, to the point I want to read the earlier books in the series. I may discover I like Lindsay more if I can see her through the eyes of other characters.

What I Enjoyed About CONFESSIONS OF A FORMER PUCK BUNNY
1. The Confessions. I liked Lindsay the most when she was being open and honest, when she was unapologetic about her sexuality and her reasons why.

2. Hockey. The hockey aspect was easily my favorite part of the book. It might be a subplot, but it still kept me engaged and I’m not really a rabid hockey fan. Although since the Chargers packed up and left town, the Gulls might be my new favorite local sports team.

3. Ryder. When he wasn’t being a jealous jerk or refusing to take no for an answer, he was a complex character that drove some of my favorite scenes in the book. His history and drama with his dad added a lot of interesting depth to his character.

4. Daddy Issues. Both Ryder and Lindsay suffer from this common young/new adult-ism, but in different ways. I like the way the author approached them differently — more subtly with Lindsay and more direct with Ryder.

5. Breakups. I love me a good angsty romance and while overall the romance was only a meh for me, the big dramatic breakup scene was what turned me around and made me invest in these two.

Bottom Line
Hockey, college romance, and a couple of kids with a lot of growing up to do. 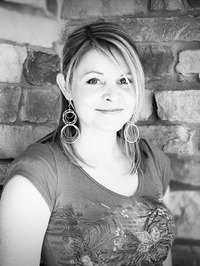 About the Author
Cindi Madsen is a USA Today Bestselling author of contemporary romance and young adult novels. She sits at her computer every chance she gets, plotting revising, and falling in love with her characters. Sometimes it makes her a crazy person. Without it, she’d be even crazier. She has way too many shoes, but can always find a reason to buy a new pretty pair, especially if they’re sparkly, colorful, or super tall. She loves music, dancing, and wishes summer lasted all year long. She lives in Colorado (where summer is most definitely NOT all year long) with her husband and three children.