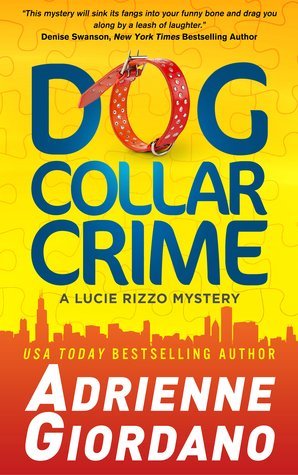 Synopsis
Out of work and down on her luck, Lucie Rizzo is forced to do the one thing she’s long avoided—move home to her nutty, mob-infested family. A move that brings her back into the tempting arms of Frankie Falcone, the ex that never fails to make her heart sit up and beg.

When Lucie parlays her temporary dog-walking gig into a career making fancy dog accessories, Frankie becomes her number one supporter. Life starts to look like a walk in the park…until three of her bling-wearing clients are dogjacked.

Despite help from the on-again, off-again Mr. Fix-It in her life, Lucie is thrown into an investigation that’s more Goodfellas than good doggie. One that could shatter her new life and her second chance at love.

My Review
There was much to love about Dog Collar Crime. In many ways, it reminded me of a Stephanie Plum novel minus the incompetent protagonist and unrealistically stupid criminals. Lucie Rizzo is out of work and forced to move back home with her mom and brother. Born and raised a mob princess, Lucie longs to break free of her family chains and make her own way in the world. But after getting laid off, she’s right back in the middle of the family drama, including a father in prison. Her on-again-off-again boyfriend, Frankie, would do anything for her, except leave behind his own mob-connected family.

Lucie makes ends meet by walking dogs and making high-end pet accessories, while she waits and hopes a job in banking comes her way. But when the dogs she walks start being targeted by someone, Lucie begins to wonder if she’ll ever be able to escape that world.

Plot
The plot is a mystery with a strong dose of romance. Finding out who is targeting her dogs and why is the main plot, but her relationship with Frankie plays a larger role than in most other books of this genre. The pacing was slow more than a few times. There seemed to be a lot of time spent walking the dogs, which granted is Lucie’s job, but not much else happened. There also seemed to be some repeated elements. Instead of escalating early, the dognappings stayed sort of the same and the back-and-forth with Frankie felt too repetitive at times. But there’s light humor, plenty of chemistry between the characters, and a couple of twists that redeem the story.

Characters
The characters are by far the best part of the story. They’re fun, quirky, well-rounded, and believable. Lucie Rizzo’s desire to be anything but the daughter of a mobster is tangible and relatable, even if your dad isn’t a made man. Frankie is also sympathetic as the loyal son who has managed to break away from the crime family and flourish in a legitimate job. Even the gangster family members transcend stereotype and are well-developed and three-dimensional.

Ending
I was expecting more from the ending. Although a mystery and not a thriller, overall the story lacked a real sense of peril for the characters. I never felt like any of their lives were truly in danger. The climax left me wondering what would happen to the characters’ relationships rather than if they would survive. And that’s not necessarily a bad thing, because I did care about all of them and wanted them to wind up happy.

What Didn’t Work for Me
1. The pacing. The story moved too slow for me at times.
2. Repetition. There were times I felt like we revisited the same issues over and over again, particularly when it came to Lucie’s feelings for, and issues with, Frankie.

What I Enjoyed About Dog Collar Crime
1. The characters. All of the characters were well developed, interesting, and avoided stereotypes.
2. Chemistry. There was instant chemistry between Lucie and Frankie, but also a great bromance between Frankie and Lucie’s brother, Joey, between Lucie and her brother, and between Lucie and her mom. These relationships all came across as lovingly authentic.
3. The mystery. The mystery of who was behind the dognappings was well plotted, and kept me guessing.
4. Ro. Best BFF ever.
5. Lucie’s mom. She was so beautifully flawed and yet I never doubted her love for her children.

Bottom Line
Dog Collar Crime is a lighthearted mystery with compelling characters and a touch of humor.

She is a Jersey girl at heart, but now lives in the Midwest with her workaholic husband, sports obsessed son and Buddy the Wheaten Terrorist (Terrier).

She is a co-founder of Romance University blog and Lady Jane’s Salon-Naperville, a reading series dedicated to romantic fiction.