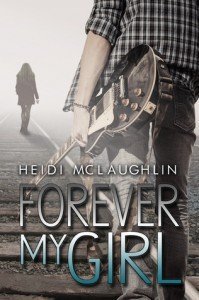 Synopsis
I was never supposed to be a rock star. I had my life all planned out for me. Play football in college. Go to the NFL. Marry my high school sweetheart and live happily ever after. I broke both our hearts that day when I told her I was leaving. I was young. I made the right decision for me, but the wrong decision for us. I’ve poured my soul into my music, but I’ve never forgotten her. Her smell, her smile. And now I’m going back. After ten years. I hope I can explain that after all this time. I still want her to be my forever girl.

My Review
Forever My Girl is an emotional love story told from two points of view. The first is Liam who makes a decision about his future, leaving his small hometown and girl behind. Josie is the girl he left broken and alone, who has spent the past ten years attempting to rebuild her life. Newly engaged, her life seems perfect until Liam arrives back in town for the funeral of their closest friend. When these two see each other again, sparks fly.

Plot
Heidi McLaughlin does a fantastic job of doling out information slowly, keeping us hooked and then carefully reeling us in. I found myself deeply into the story from the first chapter, and this is something that is rare for me with romance novels. It usually takes me several chapters at least to really get into it.

The plot unfolds at the perfect pace through most of the book. About the only thing really lacking is a decent antagonist. There is Liam’s conniving agent, but she’s not developed enough to really be the one you love to hate. And her plans to destroy Liam and Josie’s relationship comes too late in the story and isn’t nearly strong enough. And then there’s Josie’s long suffering fiancee. We get a glimpse at his potential anger early on, but it never escalates and he doesn’t present enough obstacles to really fulfill his potential as an antagonist.

Characters
The main characters are strong, fleshed out, and engaging. Even most of the secondary characters have depth that is often missing in romance novels. My only complaint is the lack of a solid antagonist which would have taken this story from 4-1/2 stars to 5.

Bottom Line
A very well written, engaging story with solid characters that you root for.