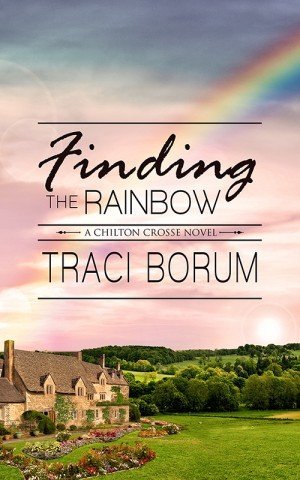 Synopsis
Holly Newbury’s life is on hold in the cozy English village of Chilton Crosse. While her friends are marrying, having children, and embarking on successful careers, Holly is raising her three younger sisters and working part time at the village art gallery.

Her life feels incomplete, but family is more important to her than anything. Then a film crew’s arrival galvanizes the community, and Holly becomes fast friends with Fletcher Hays, the movie’s love-shy American writer.

The production of an Emma film isn’t the only drama in town, though. Their father makes a choice that threatens everything she gave up her dreams for. Holly’s sisters endure growing pains.

And Fletcher plans to return to America as soon as filming is over, ruining any chance of their relationship blossoming further. After years of sacrificing for others, Holly must find the courage to take a risk on a future she never dared to expect.

My Review
Finding the Rainbow is a return to my favorite English village, Chilton Crosse, the place I fell in love with while reading Painting the Moon. The story picks up not long after the end of Painting the Moon and is told from Holly’s point of view, Noelle’s gallery assistant. Holly dropped out of university six years before to help raise her younger sisters after the sudden, unexpected death of her mother.

Holly takes care of her sixteen-year-old twin sisters, Rosalee and Bridget, and twelve-year-old baby sister, Abbey while her father commutes to London where he runs a successful business. Assuming the roles of mother, caretaker, and older sister, doesn’t leave Holly with much time for herself, although she takes courses online and escapes to her grown up playhouse out back to read in peace.

When the BBC production of Jane Austen’s Emma comes to Chilton Crosse, Holly decides a book club centered around the same novel is a wonderful way to immerse the town into the production. Walking through town, she stumbles upon one of the screenwriters, Fletcher, and American from Texas, and coerces him into addressing the book club, launching one of the best platonic male/female friendships I’ve read in awhile. The camaraderie is evident from the start, rather than developing after the whole lust-at-first-sight thing which is common in most romances of late. This is a refreshing change from the ordinary.

Plot
The plot in Finding the Rainbow is more subtle than in Painting the Moon. Overall, it’s about Holly finding where she fits, and the romance plays a role in that, but it’s so much more than that. When Holly’s father makes a choice that changes her function within the family, she feels adrift and without purpose. This is no “I need a man to be happy” story, though. Her friendship with Fletcher is well-established before anything romantic evolves and he isn’t her saving grace. Strong subplots involve the making of the movie and a romance involving Holly’s boss, Frank. Additionally, Holly’s father, all three sisters, and even Fletcher have their own arcs.

World Building
The world building is almost stronger this time around than in Painting the Moon. Sure, we’re already well acquainted with Chilton Crosse, but Noelle was a recent transplant, whereas Holly was born and raised there. This time, we get to see it through the eyes of a lifelong resident, allowing us to gain a more intimate understanding of the village and it’s colorful inhabitants.

Characters
I love all the characters, and I think that’s where Traci Borum’s writing really shines. She creates unique, three-dimensional characters that come alive in believable ways. Each and every character is distinct, even twins, Rosalee and Bridget. Holly is not Noelle 2.0 either, nor is Fletcher a reboot of Adam.

Writing
Once again, the writing transports us to a quaint English countryside where life is slower paced and it rains. A freakishly lot. The pacing matches the laid-back lives of the characters that inhabit the pages.

Ending
I thought the ending did justice to the story, and I liked it more than the end of Painting the Moon, which I thought was well done. The characters remain true to themselves, which I think is key.

Top Five Things I enjoyed about Finding the Rainbow
1. Holly’s Personality. I love her outlook on life, the way she’s so resilient and doesn’t allow herself to wallow, even though she has plenty of reason to.

2. Fletcher. I love that he was always a friend first to Holly. He could have been the typical American guy, looking for a quick lay and short-term romance until he left, but he never went that route.

3. Rosalee. Of Holly’s sisters, she was my favorite. Her passion and tender heart made her someone I’d want to befriend if she was a real person.

4. Emma. While not my favorite Austen novel (that would be Sense and Sensibility) I do love the Jane Austen themes that wind through both of Traci Borum’s novels.

5. Grown Up Playhouses. I love how Holly turned her childhood playhouse into and adult retreat. I’d kill for someplace like that in my own backyard!

Bottom Line
Finding the Rainbow is a sweet story that is similar in some way to Painting the Moon, but has a little Notting Hill twist with a dash of The Englishman Who Went Up a Hill But Came Down a Mountain.

About the Author
Traci Borum is a writing teacher and native Texan. She’s also an avid reader of women’s fiction, most especially Elin Hilderbrand and Rosamunde Pilcher novels. Since the age of 12, she’s written poetry, short stories, magazine articles, and novels.

Traci also adores all things British. She even owns a British dog (Corgi) and is completely addicted to Masterpiece Theater–must be all those dreamy accents! Aside from having big dreams of getting a book published, it’s the little things that make her the happiest: deep talks with friends, a strong cup of hot chocolate, a hearty game of fetch with her Corgi, and puffy white Texas clouds always reminding her to “look up, slow down, enjoy your life.”