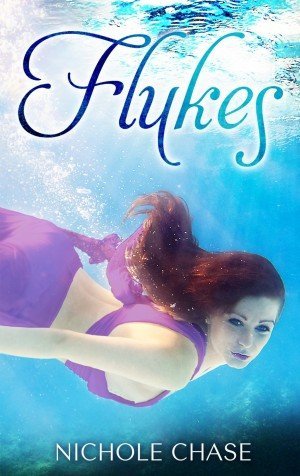 Synopsis
Meena has a secret guarded closely by her family—a secret as dangerous as the sea and buried just as deep. When court-appointed community-service workers are assigned to Flukes, the family-owned animal sanctuary, everyone is on high alert.

It doesn’t help that Meena finds herself attracted to sexy-as-sin Blake Weathering, one of the new workers. If he wasn’t so distracting, she might be able to land Flukes a much-needed cruise-line contract.

Blake Weathering, the first in his family to attend public school, has developed a tough image. Unfortunately, it lands him in trouble. Now banned from his high school graduation ceremony, getting his diploma is dependent upon a community-service gig cleaning up fish crap.

No diploma, no trust fund fortune—and no way to escape his overbearing father. The last thing he needs is the distraction of a mysterious girl with teal eyes who pulls at his heartstrings.

When Blake discovers Meena’s secret, they are both thrown into a desperate search for information about her past. Two worlds pull them in opposite directions, and they will have to fight to hold on to all that really matters.

My Review
This is a fun, new adult paranormal/fantasy romance with plenty of heat and several good plot twists. Set in the Caribbean, it feels equal parts Splash the movie and the Australian teen mermaid adventure, H2O. Meena is a mermaid, adopted by two humans after her mother is killed by a fisherman’s net. Her parents own and operate a marine animal sanctuary that’s barely in the black. To help maintain the facility, they use the services of ne’re do wells fulfilling their court-ordered community service.

One of those just happens to be Blake Weathering, son of one of the wealthiest inhabitants of the island. Blake has his own secrets, like why he’s stuck doing community service the summer after his senior year instead of escaping the island and the stifling life under his father’s thumb.

Sparks fly when Meena and Blake meet, but the two bicker more than anything else. At least in the beginning. That bickering turns to playful banter, before turning into full-on flirting. But secrets, a pair of mysterious strangers, an angry guy named Devin with a chip in  his shoulder, and Blake’s impending departure from the island Meena feels she can never leave, keep Meena and Blake at arm’s length.

Plot
Primarily an older teen romance, there is a fair amount of angst, which is what I love most about this genre. Add a couple of mysteries, hidden secrets, and the plot unfolds with a lot of obstacles that make it an engaging read.

Characters
Meena and Blake are interesting and well-developed. I didn’t get that same sense with Meena’s parents, although Blake’s dad has some interesting layers. There is some subtle character development, but this is definitely a plot-driven story.

Writing
While written about older teens, it’s definitely more new adult than young adult. The characters are older teens, out of high school and there are some scenes that are inappropriate for younger readers. That said, the author does a good job of creating the kind of tension and angsty drama that makes a teen romance work.

Ending
I liked the ending. It wasn’t necessarily thought-provoking or overly emotional, but it works for this story.

Top Five Things I enjoyed about Flukes:
1. Dolphins. I love Meena’s relationship with Mitch, Jallia and the gang.

2. Blake. He comes off as just another cocky, arrogant good-looking douche, but he’s got a heart of gold and the way he protects his brother makes him a hero in my book.

3. Meena. She wears her snarkiness like a protective armor and that makes her a more interesting character.

4. Mermaids. Nichole Chase’s mermaids are so different from anything else I’ve read or seen with these mythological characters and it’s a fun twist on fantasy.

5. The Caribbean. Beautiful, relaxing, exotic. It sounds like a fabulous place to visit, if only in my mind.

Bottom Line
Flukes is a new twist on the mermaid genre with fresh characters and an intriguing plot.

She is also the instructor of Say What? a dialogue class at the Romance Academy.

When not writing, you may find her reading, painting, crafting, or chasing her daughter around the house while making monster noises.