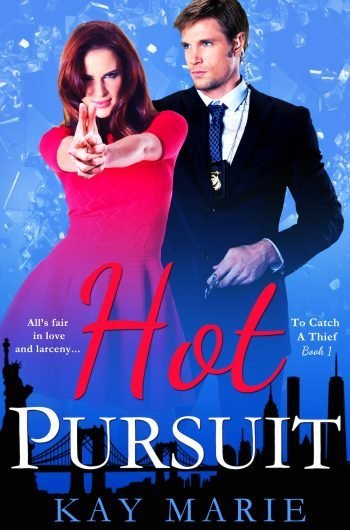 HOT PURSUIT (To Catch a Thief #1) by Kay Marie

Synopsis
How to Lose a Guy in 10 Days meets White Collar in this sassy and sweet romantic comedy, new from bestselling author Kaitlyn Davis, writing as Kay Marie.

All Jolene Carter has ever wanted is to own a bakery of her own. There’s only one problem. Her father, Robert Carter, is a world-renowned art thief and she’s, well, sort of his protégé. But he’s promised her that this next job in New York will be their last, and she won’t let anyone get in the way of her dreams…especially not the distractingly delicious FBI agent hot on her tail.

Agent Nate Parker has been on the Robert Carter case for years, and if the rumors of the aging criminal’s retirement are true, this might be his last chance to nail him. With the legacy of his late father in the back of his mind, the stakes are more personal than anyone realizes. He won’t let anything stand in the way of justice…especially not the red-headed vixen who keeps giving him the slip.

My Review
I love a good romantic suspense with a healthy dose of humor which is exactly what HOT PURSUIT delivers. Jolene Carter is the daughter of a notorious art thief being hunted by the FBI. All she wants is open her own bakery where she can make her coopies–cookies wrapped in pie dough. FBI agent Nate Parker just wants to nail Robert Carter. Too bad Carter’s sexy, flirty, bad ass daughter is hell-bent on making his life difficult. The two begin a game of cat and mouse that is as much fun as it is frustrating, until things shift and feelings get in the way of what both of them want. Responsibilities, desires, loyalties, and wits tangle within both Nate and Jo. Both will be forced to choose between what they want most and what they must do, with no easy out for either of them, and nothing but heartache on the horizon. 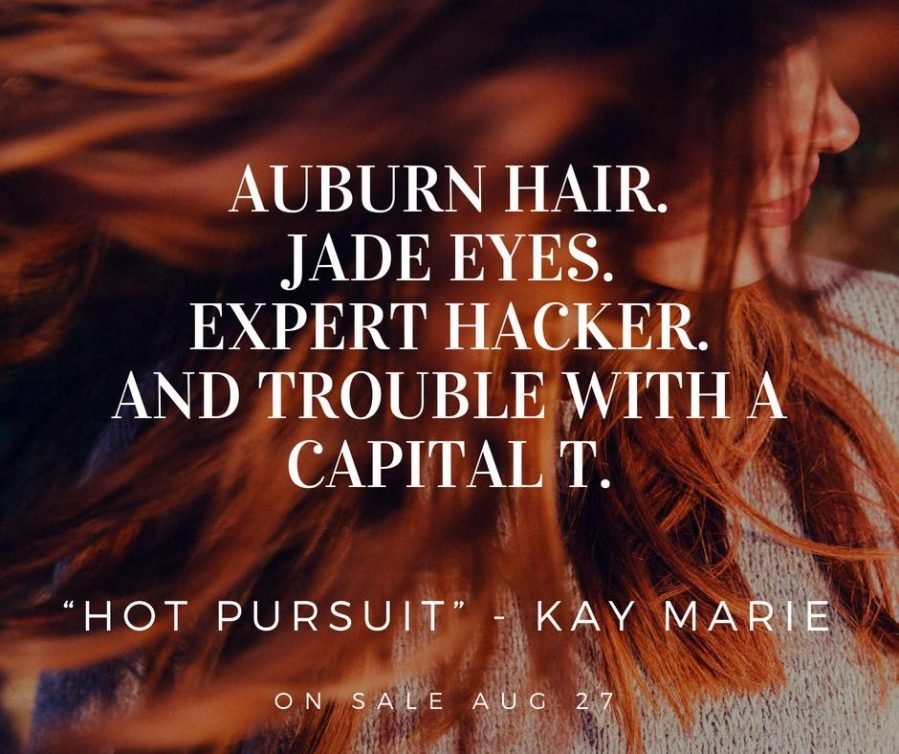 Plot
The plot centers around the heist that Jo is helping her dad and her best friend, Thad, pull off, and the FBI’s attempts to catch them in the act. Central to that plot is the budding romance between Jo and Nate. The two plots are so intertwined they’re nearly one in the same. The romance drives conflict in the heist and Jo’s criminal family and her role in all of it drives conflict in their relationship.

The Characters
The characters are what sold this book for me. Not that it wasn’t a fun story, but the author made me care about the characters so much, that I wanted everything for both of them. Each has deep motivations and rich back stories that drive everything they do. At no point did I question their actions, because they remain true to themselves throughout. Jo is funny, irreverent, smart, and lonely. Nate is all about the rules and he hates everything Jo stands for, but that doesn’t stop him from falling for her after finding out what makes her do the things she does. Each wants to save the other from themselves. 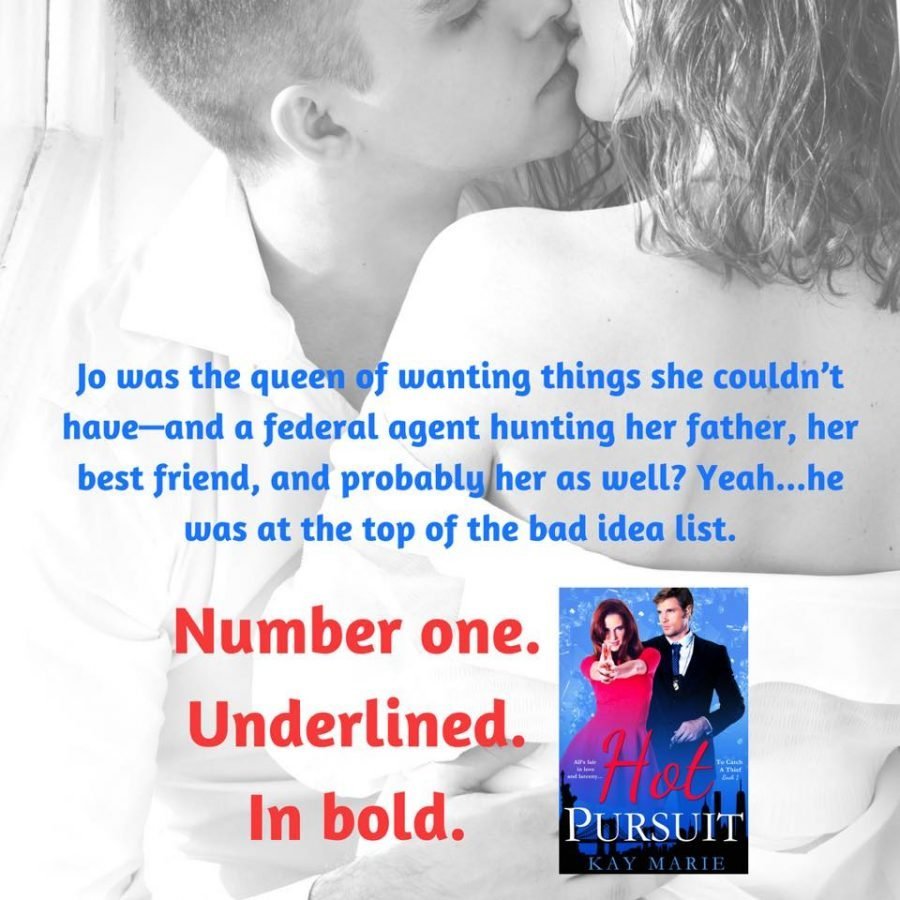 Top Five Things I Loved About HOT PURSUIT
1. Jolene Carter. She’s adorably spunky, unpredictable, and just the type of person I’d love to have for a BFF.

3. Non-graphic heat. Don’t get me wrong, I love graphic sex scenes as much as the next reader, but the way the author creates sexual tension is straight out of Gypsy Rose Lee’s playbook. Always leave them wanting more!

4. Thievery. I’m not promoting lawbreaking, but I love a good heist story, along the lines of Oceans Eleven or Now You See Me. HOT PURSUIT is in the same vein, and it was pure fun. 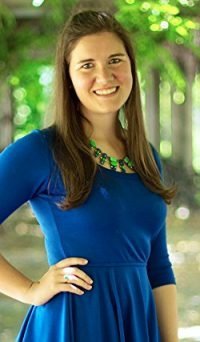 Always blessed with an overactive imagination, Kaitlyn has been writing ever since she picked up her first crayon and is overjoyed to share her work with the world. When she’s not daydreaming, typing stories, or getting lost in fictional worlds, Kaitlyn can be found playing fetch with her puppy, watching a little too much television, or spending time with her family. If you have any questions for her–about her books, about scheduling an event, or just in general–you may contact her at: KaitlynDavisBooks@gmail.com

Sign up for Kaitlyn’s newsletter to stay up-to-date with all of her new releases, to receive exclusive subscriber bonus content, and more! bit.ly/KaitlynDavisNewsletter