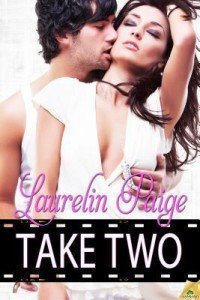 Synopsis
He’s ready for his close up, but she’s the one calling the shots. On the night of her graduation from film school, straight-laced Maddie Bauers fell completely out of character for an oh-my-god make-out session with a perfect stranger. Complete with the big O.Seven years later, that romantic interlude is still fresh in her mind. That stranger is now a rich and famous actor. And she’s one very distracted camera assistant working on his latest production. She might consider another tryst…if he even remembers her.Micah Preston does indeed remember Maddie. Too bad he’s sworn off Hollywood relationships. He allows himself as much sex as he likes—and oh, he does like—but anything more is asking for trouble. For the woman, not for him. Yet knowing Maddie could want more than a movie-set fling doesn’t stop him from pursuing her like a moth drawn to hot stage lights. But as the shoot nears its end, it’s decision time. Is it time to call, “Cut!” on their affair, or is there enough material for a sequel?Warning: Contains a dreamy movie star hero, a focus-pulling heroine, off-the-charts instant chemistry, steamy sex in near-public locations, and a new use for lip gloss.

My Review
Take Two is thoroughly engaging from the first page. It moves along swiftly, is punctuated by enough angst that would give any teen novel a run for its money, and the sex scenes are H.O.T. hot! The author has done her homework and has given us a behind-the-scenes look at the entertainment industry that is almost its own character in the story. The chemistry between Maddie and Micha is palpable, rivaling some of the most passionate couples between the pages.

Plot
The plot is solid, if not ground-breaking. There is a formulaic predictability to it, but I think that’s pretty standard for the genre. While there were a few instances where I found myself rolling my eyes, in general, it kept me turning the page.

Characters
I found the characters a little bit cliche. There was the bad-boy with something in his past that has him bedding every girl in town, refusing to fall in love until he finally meets the one. Then there’s the good girl searching for love and won’t settle for less and when she meets the bad boy, he brings out the bad girl in her the way no one else ever has. The supporting cast is almost non-existent — only there to move the plot along, which is their role, but we don’t see nearly enough of them. And Beaumont, the antagonist, is only a shell. We never learn what makes him tick, or why he has it in for Maddie. A superficial reason is given, but I was hoping for something deeper before the story ended. As a result, he came off as a stereotype and that’s too bad, because he had potential.

Bottom Line
This is a solid four out of five stars for a fun read that moves quickly, provides an insane amount of heat, and lives up to expectations. If you like steamy contemporary romances with a phenomenally sexy bad-boy, this is right up your alley.