Author Michael W. Garza is revealing the cover to A VEIL OF SHADOWS, the second book in the young adult fantasy series, The Shadow Gate Chronicles, releasing September 22, 2017. See below for information on the book, a link to add it to your Goodreads TBR, and links to purchase THE LAST SHADOW GATE, book 1 in the series. 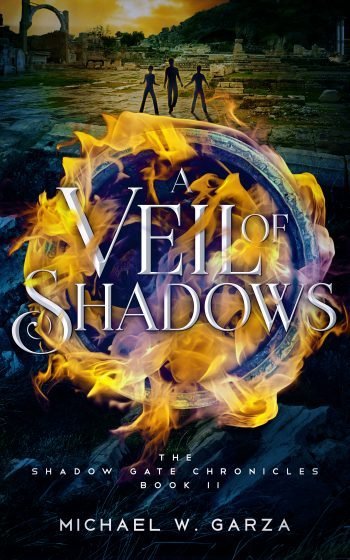 A VEIL OF SHADOWS (The Shadow Gate Chronicles #2) by Michael W. Garza

Synopsis
Naomi and Gavin are on the run. Having narrowly escaped Azzmon’s clutches, they find themselves hunted by Malick, another Shade Lord. He has amassed an army of foul creatures, and the city-state of Tarravale stands on the brink of chaos. Naomi’s ability to open Shadow Gates makes her an alluring target, and the Shade Lord will stop at nothing to possess her. The children must find a way to escape before their new world is buried in an unwinnable war.

FAQ:
Where did the idea for The Last Shadow Gate come from?
This series was in the draft phase for over a decade. I based the characters on my kids and as they grew and developed their own personalities I allowed the characters in the book to do the same. It’s been a labor of love and seeing it finally in print has been a wonderful experience. Every time I read through it I see my daughter and son on every page.

Where do you get your ideas?
Ideas for stories come from the strangest places. I never sit down and say ‘let’s write a book’ there’s usually a spark that comes out of nowhere. It’s the littlest things that lead to the big ideas for me. I’m never in a hurry when it comes to writing so I’ll sit on something for quite a while and let it build until I can see an entire adventure from beginning to end. In that way, by the time I sit down to write I usually know exactly where I’m going.

How do you find the time to write?
As a father of three, time is always a challenge. Writing is a hobby for me. It’s something I’m passionate about but my focus is usually needed elsewhere. A majority of my writing is done in the quiet of a late night when everyone else is in bed. I take my shots whenever I can get them. I’ve been known to disappear for a short time here and there if I see an opening for a writing opportunity but a majority of the good stuff I get down on paper is done long after everyone else is snoring.

About the Author
Michael W. Garza often finds himself wondering where his inspiration will come from next and in what form his imagination will bring it to life. The outcomes regularly surprise him and it’s always his ambition to amaze those curious enough to follow him and take in those results. He hopes everyone will find something that frightens, surprises, or simply astonishes them.