Avon Books and New York Times and USA Today bestselling author, Jill Shalvis, are revealing the cover to CHASING CHRISTMAS EVE, the fourth book in the adult contemporary romance series, Heartbreaker Bay, releasing September 26, 2017. See below for information on the book and series, pre-order links, and an exclusive excerpt. 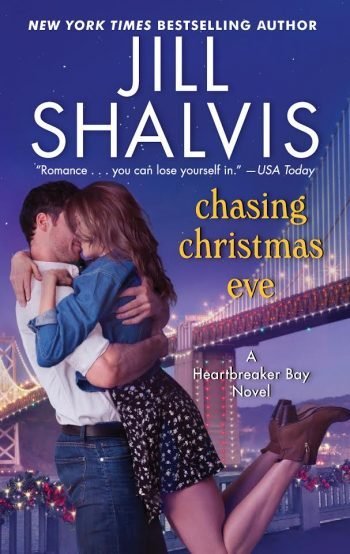 Run for the hills—temporarily. That’s Colbie Albright’s plan when she flees New York for San Francisco. Wrangling her crazy family by day and writing a bestselling YA fantasy series by night has taken its toll. In short, Colbie’s so over it that she’s under it. She’s also under the waters of a historic San Francisco fountain within an hour of arrival. Fortunately, the guy who fishes Colbie out has her looking forward to Christmas among strangers. But she’s pretty sure Spencer Baldwin won’t be a stranger for long.

Spence’s commitment to hiding from the Ghosts of Relationships Past means he doesn’t have to worry about the powerful—okay, crazy hot—chemistry he’s got with Colbie. Just because she can laugh at anything, especially herself… just because she’s gorgeous and a great listener…just because she “gets” Spencer immediately doesn’t mean he won’t be able to let Colbie go. Does it?

…and hope for a miracle.

Excerpt
The bathroom door opened, and even better than his fantasy, Colbie emerged from a cloud of steam, her willowy body wrapped in one of his towels, her exposed skin gleaming and dewy damp. Her hair had been piled on top of her head, but wavy strands had escaped, clinging to her neck and shoulders.

He couldn’t tear his gaze off of her. There was just something so uncalculated about her, so . . . natural and easy. She was like a beacon to him, which was both crazy and more than a little terrifying.

Clearly not seeing him against the wall, she moved with an effortless grace to the suitcase she’d left at the door. Bending low enough to give him a near heart attack, she rifled through her things, mumbling to herself that she should’ve researched more about how to be a normal person instead of how to kill someone with an everyday object.

“Do you kill a lot of people, then?” Spence asked.

“Motherforker!” she said with a startled squeak of surprise, whirling to face him, almost losing her grip on the towel.

Five days a week, Spence worked out hard in this gym. Mostly to outrun his demons, but the upside was he could run miles without losing his breath. But he lost his breath now.

And that wasn’t his body’s only reaction. 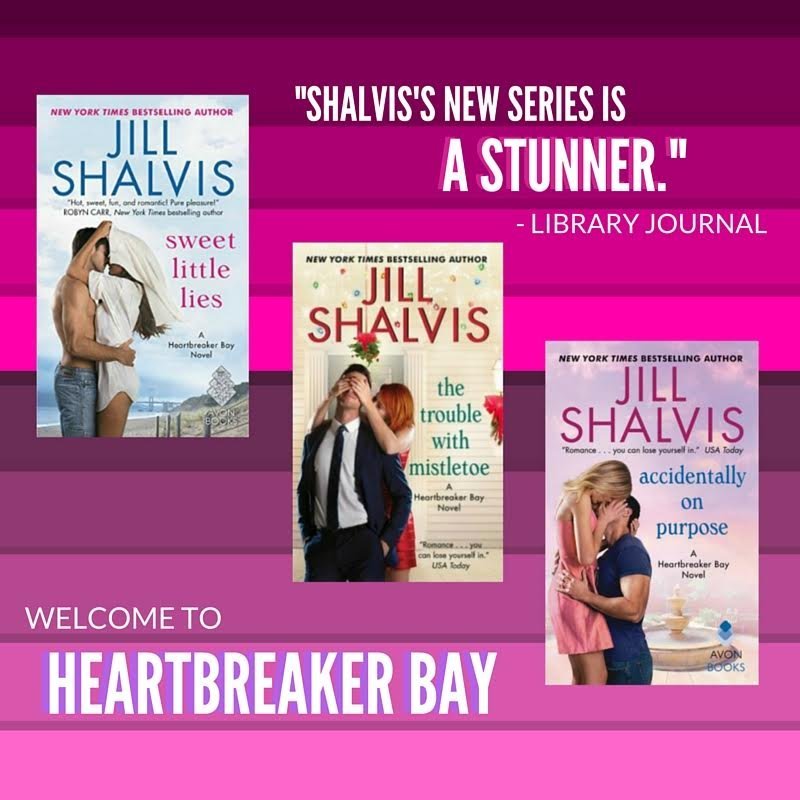 Synopsis
Choose the one guy you can’t have…

As captain of a San Francisco Bay tour boat, Pru can handle rough seas—the hard part is life on dry land. Pru loves her new apartment and her neighbors; problem is, she’s in danger of stumbling into love with Mr. Right for Anybody But Her.

Pub owner Finn O’Riley is six-foot-plus of hard-working hottie who always makes time for his friends. When Pru becomes one of them, she discovers how amazing it feels to be on the receiving end of that deep green gaze. But when a freak accident involving darts (don’t ask) leads to a shirtless first aid, things rush way past the friend zone. Fast.

And then tell him the truth.

Pru only wants Finn to be happy, it’s what she wishes for at the historic fountain that’s supposed to grant her heart’s desire. But wanting him for herself is a different story—because Pru’s been keeping a secret that could change everything….

The Trouble with Mistletoe (Heartbreaker Bay #2) by Jill Shalvis

Synopsis
If she has her way…

Willa Davis is wrangling puppies when Keane Winters stalks into her pet shop with frustration in his chocolate-brown eyes and a pink bedazzled cat carrier in his hand. He needs a kitty sitter, stat. But the last thing Willa needs is to rescue a guy who doesn’t even remember her…

…He’ll get nothing but coal in his stocking.

Saddled with his great-aunt’s Feline from Hell, Keane is desperate to leave her in someone else’s capable hands. But in spite of the fact that he’s sure he’s never seen the drop-dead gorgeous pet shop owner before, she seems to be mad at him…

Unless he tempers “naughty” with a special kind of nice…

Willa can’t deny that Keane’s changed since high school: he’s less arrogant, for one thing—but he doesn’t even remember her. How can she trust him not to break her heart again? It’s time to throw a coin in the fountain, make a Christmas wish–and let the mistletoe do its work…

Synopsis
It’s Christmas Eve and Rory Andrews is desperate to get home to the family she hasn’t seen in years. Problem is, her only ride to Lake Tahoe comes in the form of the annoyingly handsome Max Stranton, and his big, goofy, lovable dog Carl.

Hours stuck in a truck with the dead sexy Max sounds like a fate worse than death (not), but Rory’s out of options. She’s had a crush on Max since high school and she knows he’s attracted to her, too. But they have history… and Max is the only one who knows why it went south.

They’ve done a good job of ignoring their chemistry so far, but a long road trip in a massive blizzard might be just what they need to face their past… and one steamy, snowy night is all it takes to bring Max and Rory together at last.

Synopsis
There’s no such thing as a little in love . . .

Elle Wheaton’s priorities: friends, career, and kick-ass shoes. Then there’s the muscular wall of stubbornness that’s security expert Archer Hunt—who comes before everything else. No point in telling Mr. “Feels-Free Zone” that, though. Elle will just see other men until she gets over Archer . . . which should only take a lifetime . . .

Archer’s wanted the best for Elle ever since he sacrificed his law-enforcement career to save her. Their chemistry could start the next San Francisco earthquake and he craves her 24/7, but Archer doesn’t want to be responsible for the damage. The alternative? Watch her go out with guys who aren’t him . . .

As far as Archer’s concerned, nobody is good enough for Elle. But when he sets out to prove it by sabotaging her dates, she gets mad—and things get hot as hell. Now Archer has a new mission: prove to Elle that her perfect man has been here all along . . ..

About the Author
New York Times and USA Today bestselling author Jill Shalvis lives in a small town in the Sierras full of quirky characters. Any resemblance to the quirky characters in her books is, um, mostly coincidental. Look for Jill’s sexy contemporary and award-winning books wherever romances are sold and click on the blog button above for a complete book list and daily blog detailing her city-girl-living-in-the-mountains adventures.
.