Author Rita Stradling is unveiling the cover to COLORLESS, a young adult fantasy, releasing August, 2017. See below for the cover, information on the book, the book’s trailer, and a link to add it to your Goodreads TBR. 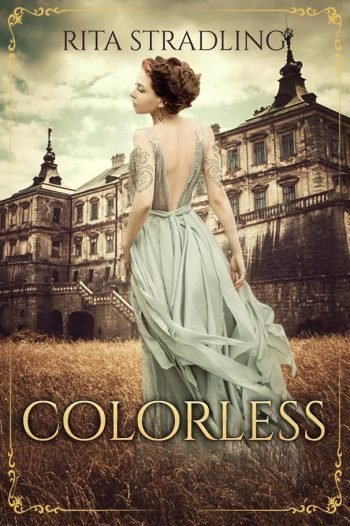 Synopsis
In Domengrad, there are rules all must live by: Fear the Gods. Worship the Magicians. Forsake the Iconoclasts.

To Annabelle Klein, the rules laid down by the Magicians are the mere ramblings of stuffy old men. As far as she’s concerned, the historic Iconoclasts, heretics who nearly destroyed the Magicians so long ago, are nothing but myth. She has much more important matters to worry about.

Heiress to a manor mortgaged down to its candlesticks and betrothed to her loathsome, lecherous cousin, sixteen-year-old Annabelle doubts the gods could forsake her more.

Then Annabelle is informed of her parents’ sudden and simultaneous deaths, and all of the pigment drips out of her skin and hair, leaving her colorless. Within moments, Annabelle is invisible and forgotten by all who know her.

Living like a wraith in her own home, Annabelle discovers that to regain her color she must solve the mystery behind her parents’ murders and her strange transformation.

Meanwhile, hundreds of the Magicians’ monks, with their all-black eyes and conjoined minds, have usurped control of Annabelle’s family manor. An Iconoclast is rumored to be about—a person who they claim goes unseen, unheard, and lost to memory, yet is the greatest threat to all of Domengrad. For the first time in a hundred years, the monks plan to unleash the dire wolves of old.

Their only target: Annabelle.

About the Author
Rita Stradling is the author of The Deception Dance series, the Dakota Kekoa series and The Fourteen Day Soul Detox Novella Serial. She has a BA in Art History and a particular love for modern and medieval art.

Rita lives with her husband and son in Northern California.

She has an insatiable novel addiction and mostly reads young adult and adult: romance, paranormal, urban fantasy and high fantasy.
.