USA Today bestselling author, Stacey Kennedy, is revealing the cover to SKIRT CHASER, the second book in her adult contemporary romance series, Filthy, Dirty Love, releasing August 8, 2017. See below for the cover, information on the book, and pre-order links. 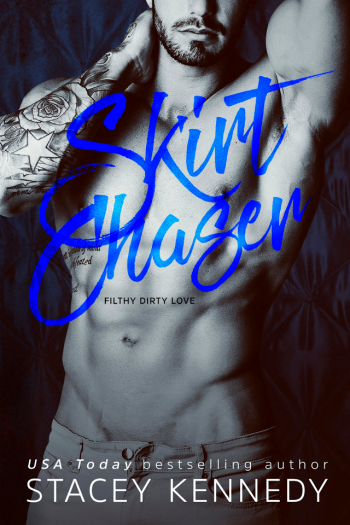 Synopsis
Greyson Crawford works hard by day and plays even harder at night. And he understands and obeys the rules of the game. One, don’t mix business and pleasure. Two, employees are off-limits. So, he’s been eagerly counting down the days until interior designer, Evie Richards is no longer under contract with his Seattle architecture firm. But when that day comes, he realizes there are more obstacles in his way. The biggest…Evie herself.

Until Evie gets asked to be the maid-of-honor in her best friend’s destination wedding, and Evie needs a date. The circumstances are perfect for Greyson to set his plan of seduction into motion. He will happily play the boyfriend for the weeklong wedding event, if Evie will surrender to his every command and play in his bed.

For Evie, it’s all fun and games until Greyson’s first touch; then she begins to question what’s real. She knows better than to fall for a guy like Greyson—a skirt chasing ladies’ man—but with every slow caress and kinky adventure, she realizes that Greyson knows what he wants, and it isn’t just her body surrendering to him…it’s her heart. 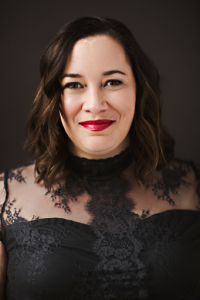 About the Author
STACEY KENNEDY is the USA Today bestselling author of the Dirty Little Secrets and Club Sin series. She writes deeply emotional romances about powerful men and the wild women who tame them. When she’s not writing sensual stories, she spends her time in southwestern Ontario with her real life hero, her husband, their two young children, and her other babies: a mini labradoodle named Jax and a chocolate labrador named Murphy. Stacey is a proud chocolate, television show, Urban Barn, and wine addict. She likes her heroes in her books like she likes her coffee . . . strong and hot!