Author Kate Kisset is unveiling the cover to ST. HELENA SANTA, a holiday novella in her adult contemporary romance series, Family Ties, releasing November 15, 2017. See below for the cover, information on the book, an exclusive excerpt, and details on her Facebook giveaway. 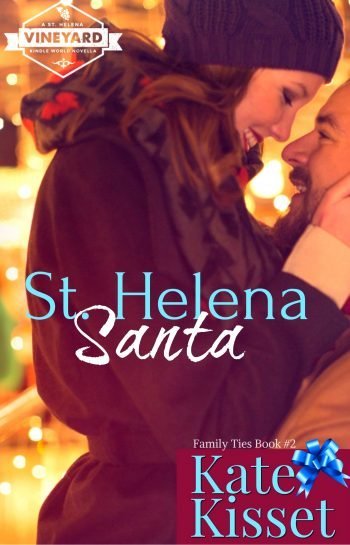 Synopsis
He’s a former tight end with a bad reputation. She’s a gorgeous computer geek who doesn’t date. Will these opposites attract, or drive each other into the end zone?

Lilly Martelli’s first vacation in over a year has her on a mission to support her two busybody relatives in St. Helena. Helping the grannies bake stinky fruitcakes for their Christmas bake sale is bad enough, but being forced to co-host the fund-raiser with Mr.-Fun-in-the-pants Brett Benning might be too hot to handle.

Brett had hoped retiring from football, becoming a firefighter, and moving back to Napa Valley would be enough to repair his reputation. But he’s sick to death of the tiny town gossip, and tired of dating in the shallow end of the pool. He’s looking to score The One.

Who knew he’d find her helping with the annual bake sale? His smart and sexy co-chair has him eating out of her hands and asking for seconds of her grandmother’s nasty fruitcake. For the first time in his life, Brett might be in over his head.

Will the magic of Christmas give them the courage to admit they’ve made the catch of their lives, or will their holiday season end without a win? 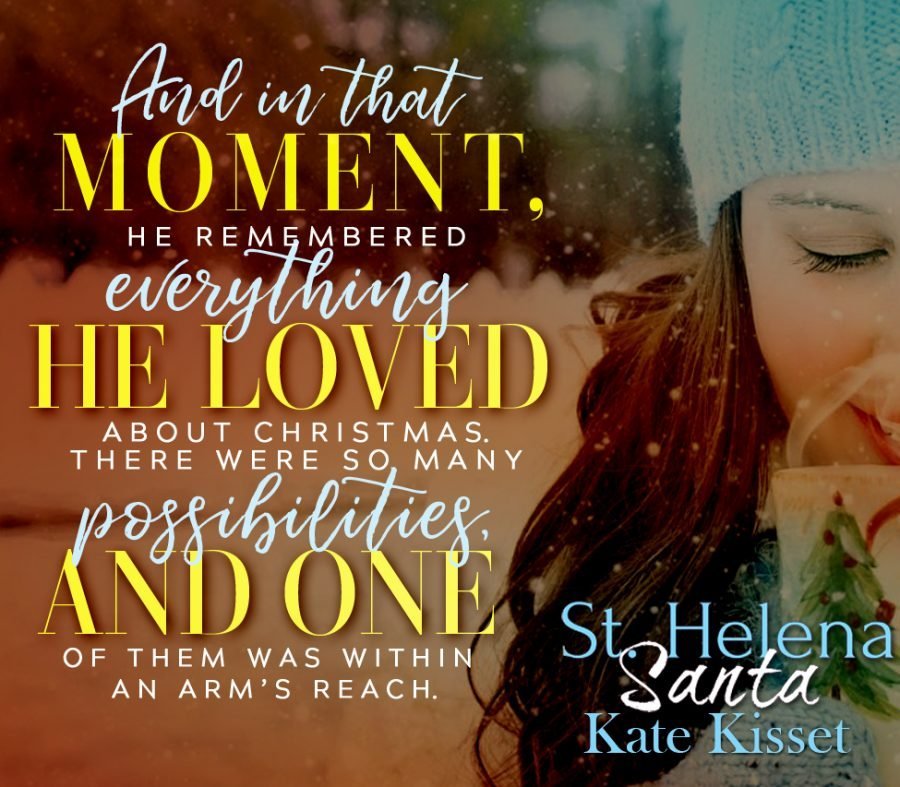 Lilly turned from the coffee maker to find her nonna’s grin-covered face.

“The St. Helena Hotties Fireman’s Calendar,” Cha-Cha clarified, as if Lilly should know, while she unloaded five fruitcakes from the bottom oven. She placed them on a cooling rack on the counter, then removed her jingle-bell oven mitts like a doctor after surgery.

Looking a little sneaky and very guilty, she tiptoed closer to Lilly. “All the firefighters are holding the most adorable little puppies,” she whispered. “And the proceeds go to St. Paws Rescue. Let me show it to you.”

“Get comfortable,” Cha-Cha commanded, giggling. “You won’t believe your eyes.”

“Nonna, please. It’s okay. I don’t need to see Mr. July, or any other mister without his clothes on. Honestly, I don’t—” She’d do it in private later.

Cha-Cha tucked a stray curl back into her bun and strutted to the counter near the oven. “Sit, sit, sit…” She waved at her and pointed to the island, her red-beaded sleeves flapping. Lilly reluctantly slid onto her stool again. “Those hotties are in here somewhere…” Cha-Cha shuffled through a drawer.

ChiChi looked up from her gooey project long enough to give Lilly a sly smile.

“Viola!” Cha-Cha pulled a glossy package from the drawer. “I’ve been saving this for Mr. January. But at my age I might not be around, so why wait?”

“What God wants…” ChiChi volunteered. And at the mention of the lord above, the sisters simultaneously blessed themselves. “Name of the Father, the Son…”

Lilly took a deep breath. She couldn’t imagine the planet without her nonna. Life was difficult enough without Grandpa. Although her nonna kept her Ryo maiden name, like her sisters had, Cha-Cha Ryo remained head over heels in love with Edwardo Antonio Martelli until the day he died. He was the love of her life. So, as much as Lilly had zero desire to look at Brett Benning in the buff—with the grannies—she was tickled to see her grandmother so happy.

Cha-Cha tore the wrapping off the calendar and smirked, letting her know her dead-on intuition had picked up Lilly’s interest in Brett. Presenting the calendar like a fragile piece of china, Cha-Cha practically danced to her. “Wipe your hands. We don’t want to get anything on the pictures. Especially the good parts,” she chuckled.

“You didn’t have to unwrap it,” Lilly said, reluctantly wiping her hands on a bright red dish towel. “You could’ve left Mr. January in the drawer.”

Cha-Cha sidled next to her. “Okay.” She beamed, excitedly flipping the pages. Bare chests, rippling muscles, and gorgeous smiles flashed by at Mach one.

“Here he is…” Cha-Cha read the caption. “St. Helena’s Brett Benning, hotter than the fourth of July.” She pointed to his photo. “Now, tell me that’s not a fun-raiser!”

Lilly gulped, praying there wasn’t anything fun raised below his belt. Why couldn’t her grandmother act like a normal granny, for crying out loud?

Her nonna nudged her and jiggled the calendar. Lilly rolled her eyes and then cautiously glanced down.

Oh, God. There was that smile…and, sweet baby Jesus. She scanned his beautiful, strong shoulders and down past the adorable chocolate Labrador puppy in Brett’s droolworthy arms, down to his six pack abs, and down. Down to the muscles that formed a v below, leading down, down…

“Close it. I don’t want to see any more.” Thank God Brett kept his pants on. She’d need to take another peek later though, just to be sure. 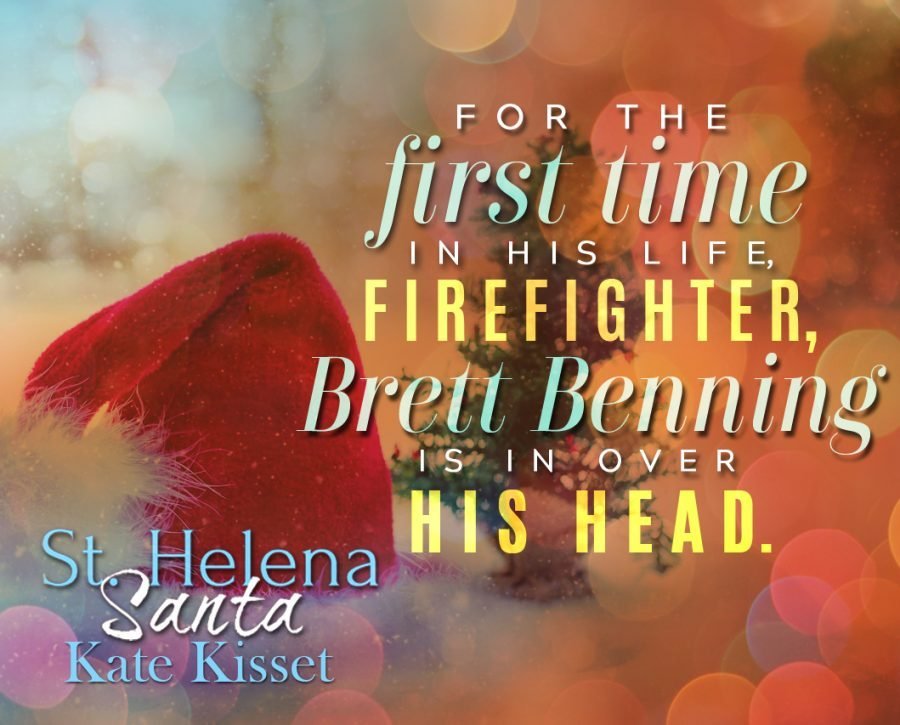 Although Kate wrote her first story in the third grade, she became serious about writing romance after she lost her mother to pancreatic cancer. The tragedy left her searching for, and eventually writing happily-ever-afters to lift her spirits.

Kate divides her time between Northern and Southern California. Her stories feature strong heroes and heroines set in the real-world vineyard settings found outside her front door.

When she’s not writing, Kate’s favorite job is being “The Mommy.” She enjoys hiking, cooking, listening to music and walking her loyal companion, Luciana Parmigiana her rescue-dog-editor.

Giveaway
Check out and enter Kate’s Giveaway on Facebook!
.