Swoon Romance and author Linda Budzinski are unveiling the cover to THE BOYFRIEND WHISPERER 2.0, the second book in the young adult contemporary romance series, The Boyfriend Whisperer, releasing February 19, 2019. See below for the cover, information on the book and series, preorder links, and details on her giveaway. 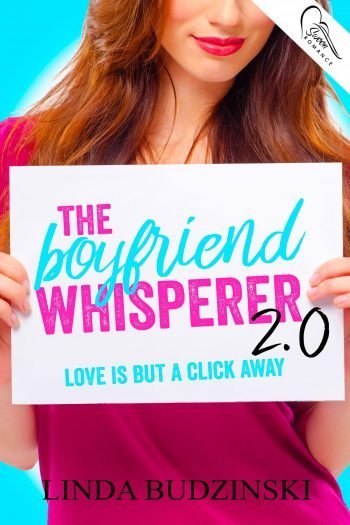 THE BOYFRIEND WHISPERER 2.0 (The Boyfriend Whisperer #2) by Linda Budzinski

Synopsis
Alicea Springer was Boyfriend Whisperer Enterprises’ top success story. That is, until her dream date, Ty Walker, dumped her a week before prom. Now it’s senior year, and Alicea has taken over the business and given it an upgrade with an automated matchmaking program she designed and nicknamed Libby, short for LIBACA, which is short for “Love is But a Click Away.”

Alicea has no interest in using the program herself. She already knows who her perfect match is … Ty. She doesn’t need an app to tell her that (or worse, match her up with someone else). In a moment of weakness, Alicea allows her friends to convince her to give Libby a try. To her horror, it matches her with the last boy on earth she’d ever want to date–Darius Groves, the class deadbeat.

When she and Darius are paired up for a class project, Alicia learns there’s more to him than his bad reputation. But the more she spends time with Darius, the more she questions their match. They have so little in common. Can Alicea defy the odds and make a match of her own heart’s desire? Or will the matchmaker remain unmatched?

About the Author
Linda Acorn Budzinski decided in the second grade that she wanted to be a “Paperback Writer,” just like in the Beatles song. She majored in journalism in college and now works in marketing and communications. She spent 18 years at a trade association in the funeral service industry, where she discovered that funeral directors are some of the bravest and most compassionate people on earth. Linda lives in Northern Virginia with her husband, Joe, and their chihuahua, Demitria. She has two step-daughters, Eris and Sarah. THE FUNERAL SINGER is her debut novel. She is represented by Andrea Somberg of Harvey Klinger Inc.