Author Bill Alive is unveiling the cover to MURDER FEELS AWFUL, the first book in his new adult mystery series, Embath Detective, releasing October 10, 2017. See below for the cover, information on the book, and pre-order links. 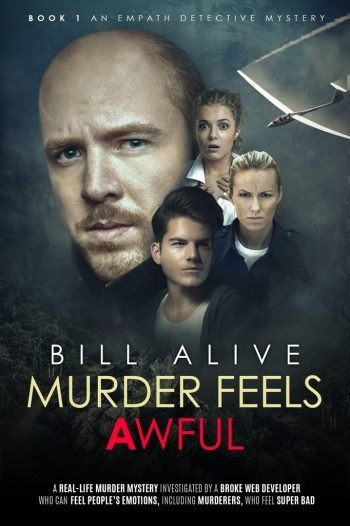 Synopsi
He can feel people’s emotions. And murderers feel awful.

Mark Falcon can “vibe” other people’s emotions … and they’re usually super painful. So he hides out in rural Virginia, making websites for clients he never has to meet. It’s a not-terrible life, sort of … until he vibes the final panic of a woman’s murder.

The last thing hermit Mark wants to do is go out and investigate, vibing which suspect is seething with secret hate. Even with me along, his trusty new sidekick/housemate. (I’m so cheerful that I double as an emotional air freshener.)

But Mark has no choice. He has to act, because our local cop detective is convinced that there’s no killer and the woman killed herself. Unfortunately, our cop’s also got the overall presence of a Viking goddess, and the last thing she wants is some delusional “psychic” website guy playing amateur sleuth. (Not to mention hitting on her.)

With the cops threatening jail, small-town secrets threatening Mark’s sanity, and a crazy-gorgeous doctor suspect threatening my heart, time’s running out for Mark and I to catch the killer…

Before the killer catches us.