Curiosity Quills Press and author, Katie Hamstead, are unveiling the cover to MYTHS OF MISH, the second book in the space opera/scifi fantasy series, Fairytale Galaxy Chronicles, releasing on March 14, 2017. See below for the cover, information on the book and series, and a link to add it to your Goodreads TBR. 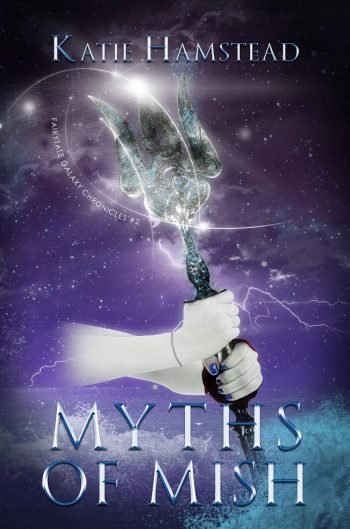 Synopsis
Hansel and Gretel Herrscher survived the witch in the woods, but the experience has made Hansel paranoid for the past ten years. He sees dark magic at every turn. When Gretel has a marriage arranged to a much older man, and Hansel discovers he’s about to be sent halfway across the galaxy, he knows something sinister is afoot.

Wilhelmine Nordon has plenty of experience with Hansel’s quirkier side. So when she catches him and Gretel running away in the middle of the night, she follows to keep them from getting killed. The siblings have never left the capital of Mish on their own, so they need a babysitter. Except when she’s discovered, Hansel gives her his usual cold shoulder, and Gretel secretly begs her to take them back.
The problem is, Hansel’s paranoia turns out to be well founded, and they’re all being hunted.

Synopsis
Apolline is happy hunting magical creatures on her pirate infested outer-perimeter planet. She is a fantastic shot, and doesn’t flinch at the blood and guts of her kills. Never once did she consider she could be the missing Princess of Tyrone.

All her life, she has heard the story of the Princess, cursed to sleep for eternity, unless her betrothed, the Prince of Oran, gave her true love’s kiss. Although Apolline knows she is betrothed, she thinks her fairy guardians arranged it out of ignorance of human ways. The thought she could be a princess is inconceivable.

Then Allard appears. Handsome, charming—but he’s not hers to have. He’s betrothed, too. Her guardians warn her against her new found friendship, but she and Allard meet in secret anyway. Despite her rough exterior, he sees beyond her gun-slinging bravado, and their love blossoms.

But the deadline for the sleeping curse is approaching. If Apolline falls in love with the wrong person, she could end up sleeping forever.

A quirky, adventurous retelling of Sleeping Beauty, with a less than princess-ly princess!

About the Author
Born and raised in Australia, Katie’s early years of daydreaming in the “bush”, and having her father tell her wild bedtime stories, inspired her passion for writing.

After graduating High School, she became a foreign exchange student where she met a young man who several years later she married. Now she lives in Arizona with her husband, daughter and their dog.

She has a diploma in travel and tourism which helps inspire her writing.

When her debut novel, Kiya: Hope of the Pharaoh, climbed into bestselling status, she believed she was onto something, and now has a slew of novels now available, and is published through Curiosity Quills Press, Soul Mate Publishing, and REUTS Publishing.

Katie loves to out sing her friends and family, play sports, and be a good wife and mother. She now works as an Acquisitions Editor to help support her family. She loves to write, and takes the few spare moments in her day to work on her novels.