Award-winning author, Jen McConnel, is unveiling the cover to SPELL BOOK & SCANDAL, a young adult paranormal romance/urban fantasy, releasing October 31, 2017. See below for the cover, information on the book, and pre-order links. 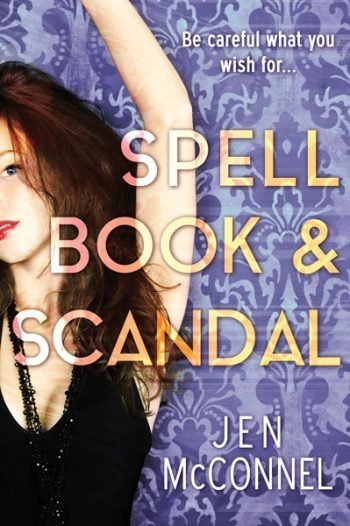 Synopsis
Shelby King is tired of living in her sister’s shadow. Just because Christina is the most powerful caster in school doesn’t mean Shelby’s any good at magic; she’s a scribe, like her mom, and everyone expects her to write spells for her sister, the way her mom always has for her dad. But Shelby’s spells fail spectacularly, and by the time she’s a sophomore, Christina won’t touch them with a ten-foot-pole; their parents aren’t much better.

Shelby is fed up, and she decides to show the world she doesn’t care if she isn’t as good as her stuck-up sister, or as talented as their powerful parents. In fact, she decides it’s time to break all the rules, magical and otherwise, and she starts sneaking out to meet Jeremiah Smallwood, the second-best caster in school at illegal pop-up spell battles around town. She may not be able to scribe for him, but she doesn’t mind letting him think that she could; Shelby’s been half in love with Miah as long as she can remember, but he’s never paid attention to her until now, and she’s not going to risk her chances worrying about a pesky thing like the truth.

But when Christina rats her out to their parents, Shelby can’t control her anger, and words come pouring out of her that she can’t take back even if she wanted to, threatening Christina’s future…and Shelby’s own chances with Jeremiah. It’ll take more magic than Shelby’s ever dreamed of to set things right, but no scribe has that much magic…right?

About the Author
Award-winning author Jen McConnel writes NA, YA, and nonfiction. When she isn’t writing, she can be found on her yoga mat or wandering off on another adventure.